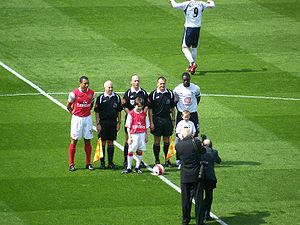 The North London derby is the name of the football local derby between the two major teams in North London – Arsenal and Tottenham Hotspur.

The first meeting between the two sides was a friendly on November 19, 1887, when Arsenal were located in Plumstead (then part of Kent but now in Greater London), and known as Royal Arsenal. The match was abandoned 15 minutes before it was due to end "owing to darkness" with Spurs leading 2–1.[1] The first League match between the clubs was in the First Division, on December 4, 1909; Arsenal won 1–0.[2]

However, a proper rivalry between the two teams did not begin until 1913, when Arsenal moved from the Manor Ground, Plumstead to Arsenal Stadium, Highbury, just four miles from Tottenham's White Hart Lane; by doing so, they became Tottenham's nearest neighbours and thus began a natural local rivalry. The two teams first faced each other as "north London" clubs (although Tottenham was technically in Middlesex until incorporated into Greater London in 1965) in a War Relief Fund friendly on August 22, 1914 at White Hart Lane; although Arsenal were in the Second Division and Tottenham in the First, Arsenal won 5–1.[3] They would go on to meet regularly during World War I in the London Combination, the regional wartime competition of the time.

The rivalry escalated in 1919 when, after World War I, the First Division was to be expanded by two teams, and the League held a meeting of the clubs to decide the two clubs by means of a vote. 19th-placed Chelsea, who would otherwise have been relegated, were allowed to stay and thus they took the first of the two spots. The second spot could have been awarded to 20th-placed Tottenham, or Barnsley, who had finished 3rd in the Second Division, but Arsenal (along with four other clubs) also bid for the place, despite their only finishing 6th in Division Two - although an error in the calculation of goal average meant Arsenal had actually finished fifth, an error which was corrected by the Football League in 1980.[4]

Tottenham Hotspur playing Arsenal in the 2009-10 Premier League at White Hart Lane. The home fans are singing to Sol Campbell. He has been targeted by Tottenham fans since his move from Spurs to the North London rivals in 2001.

After an endorsement by League President and chairman of Liverpool John McKenna on account of their longer membership of the League, Arsenal won the vote by eighteen votes to Spurs' eight (Barnsley got five, Wolves four, Nottingham Forest three, Birmingham two and Hull City one) and were thus elected to the First Division.[5] It has been frequently alleged that Arsenal chairman Sir Henry Norris used underhand dealings in order to bring this about, although nothing has been proven.[6] The decision infuriated Tottenham and their supporters, although eleven years previously, Tottenham themselves had been elected to join the Football League Second Division despite only finishing 7th in the 1907-08 Southern League,[7] at the expense of Southern League champions Queen's Park Rangers, who had also applied and had resigned from the Southern League in expectation of promotion.[8][9]

Despite the setback, Tottenham were soon promoted back into the top flight after taking the 1919-20 Second Division title,[10] and the derby was once again regularly contested. The first fully competitive derby match after Arsenal's 1913 move to North London was a First Division match that finished 2–1 to Tottenham, on January 15, 1921 at White Hart Lane. The early matches between the two were noted for their bitterness - a particularly vicious match in September 1922 led to both clubs being censured by the Football Association and threatened with being forced to play behind closed doors.[5][11]

Tottenham played in the Second Division between 1928 and 1933, and 1935 and 1950,[10] which naturally led to a drop in the number of matches between the two clubs in this period and a cooling of passions. Relations between the two clubs improved somewhat after the Second World War, after Tottenham allowed Arsenal to play their home matches at White Hart Lane while Highbury was requisitioned as an ARP station and subsequently bombed. The two sides met in the FA Cup for the first time in the 1948-49 season, when Arsenal won a third round tie 3–0.

Since 1950 there has only been one season (1977-78[10]) where Spurs and Arsenal have not been in the same division, meaning fixtures between the two are regular and this has maintained the rivalry to the present day; there have been many notable matches where the course of a title or the journey to a cup final has relied on the outcome of a derby match. As with any major football rivalry, gloating and banter between the two sets of fans is commonplace. Many of whom work and even live together, and players who transfer between the two teams receive a bad reception from their former fans; an example was defender Sol Campbell,[12] who was nicknamed "Judas" by Spurs fans after he crossed the divide in 2001.

Arsenal fans have a celebration day related to the North London rivalry. Arsenal fans celebrate St. Totteringham's day which is the day in the season when Tottenham cannot mathematically finish above Arsenal on the league table.[13][14][15][16][17] St Totteringham Day was Arsenal fans' response to Spurs fans having, some years before, declared 14 April to be St Hotspur day in honour of Spurs' 3–1 win over Arsenal in the 1991 FA Cup semi final. St. Hotspur Day was also celebrated on 14 April 2010, when Spurs beat Arsenal 2–1.[18]

On 20 November 2010, Tottenham registered their first win at Arsenal in 17 years when they came from 2–0 down at half-time to win 3–2. The win also broke a 68 game run of winless results away from home against the 'big four' clubs.[19]

Both Spurs' and Arsenal's fan bases are highly cosmopolitan and multi ethnic - a reflection of the cultural diversity of north London. According to a report in 2002, Arsenal had 7.7% of their fans calling themselves non-white British, the highest in the league at the time.[20] Both clubs also have extensive fan bases throughout the UK and the rest of the world. Arsenal fans call themselves "Gooners" - a reworking of the club's "Gunners" nickname (itself a reference to Arsenal's origins as a munitions factory team). Spurs fans call themselves "yids" - a reference to the fact that, because of the large Jewish element among their support, fans of many other clubs back in the 1970s and 80's directed antisemitic chants at Spurs fans. In an attempt to draw the sting from these chants, Spurs fans (whether Jewish or not) adopted the words "yid" and "yiddo" for themselves and thereby turned a pejorative into a term of pride and belonging. With the passing of time and as a consequence of the ever mutating nature of the English language, the words "yid" and "yiddo" now only ever mean "Spurs fan" (or player) when used in the context of English football - even by fans of other teams. There is, however, still some controversy over the use of "yid" or "yiddo", especially for those who do not understand the positive origins of Spurs fans' use of the words.[21]

Although Arsenal and Tottenham have never met in a major cup final, there have been North London derby matches that have significantly contributed to one of the two clubs winning a trophy, such as semi-finals and title deciders. These include:

Tottenham's record for goals scored against Arsenal is shared by Billy Minter and Bobby Smith, with nine goals each.[24] Arsenal's record is held jointly by Emmanuel Adebayor, Alan Sunderland & Robert Pires with eight each.[25] Arsenal's long-time defender David O'Leary holds the record for most North London derbies played (35), while Gary Mabbutt and Steve Perryman shared the corresponding record for Spurs, with 31.[25]

These are the major football honours of Arsenal and Tottenham Hotspur.

While the Inter-Cities Fairs Cup is recognised as the predecessor to the UEFA Cup, it was not organised by UEFA. Consequently, UEFA do not consider clubs' records in the Fairs Cup to be part of their European record.[28]

Perhaps due to the rivalry between the clubs, relatively few players have played for both Arsenal and Spurs since 1913. The players who have done so are listed below.[24][27]

In addition, former Spurs player, Herbert Chapman, subsequently became manager of Arsenal; former Arsenal winger Joe Hulme managed Tottenham Hotspur between 1945 and 1949, while ex-Gunner Terry Neill was Spurs manager between 1974 and 1976, before crossing back to manage Arsenal between 1976 and 1983. Most famously, George Graham was first an Arsenal player, then managed the Gunners between 1986 and 1994, before being fired and later taking up the reins at White Hart Lane between 1998 and 2001.

Jamie O'Hara was a youth player at Arsenal, before joining Tottenham. However, he did not play a single game for Arsenal.[29]

Lee Butcher was a youth player at Arsenal, then joined Tottenham and played many games in the reserves before moving to his current team, fellow London club Leyton Orient

Ron Piper was an amateur at Arsenal without playing a senior match before joining Tottenham in October 1960.

Additionally, Herbert Chapman played as an amateur at Spurs between 1905 and 1907, long before he was the Gunners' first title-winning manager between 1925 and 1934.[30]

Played for both teams in North London derby

The following players have played in at least one North London derby for both teams:[31]