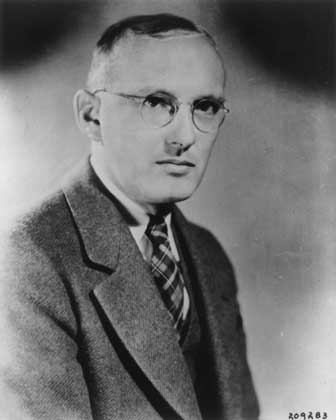 Karl Guthe Jansky (, &ndash; , ), was an American and who in August 1931 first discovered s emanating from the . He is considered one of the founding figures of .

Karl Guthe Jansky was born in what was then the where his father, Cyril M. Jansky, was Dean of the College of Engineering at the University of Oklahoma at Norman. Dean Jansky, born in Wisconsin of Czech immigrants, had started teaching at the age of sixteen. He was a teacher throughout his active life, retiring as Professor of Electrical Engineering at the University of Wisconsin. He was an engineer with a strong interest in physics, a trait passed on to his sons. Karl Jansky was named after Dr. Karl Guthe, who had been an important mentor to Cyril M. Jansky.

Karl Jansky's mother, née Nellie Moreau, was of French and English descent. Karl's brother Cyril Jansky Jr., who was ten years older, helped build some of the earliest radio transmitters in the country, including 9XM in (now WHA of ) and 9XI in (now ).

Karl Jansky attended college at the where he received his BS in in 1927. In 1928 he joined the Bell Telephone Laboratories site in . Bell Labs wanted to investigate atmospheric and ionospheric properties using "s" (s of about 10-20 meters) for use in transatlantic service. As a radio engineer, Jansky was assigned the job of investigating sources of static that might interfere with radio voice transmissions.

At Bell Telephone Laboratories Jansky built an antenna designed to receive radio waves at a of 20.5 MHz (wavelength about 14.6 meters). It was mounted on a turntable that allowed it to be rotated in any direction, earning it the name "Jansky's merry-go-round". It had a diameter of approximately 100 ft. and stood 20 ft. tall. By rotating the antenna on a set of four Ford tires, the direction of a received signal could be pinpointed. A small shed to the side of the antenna housed an analog pen-and-paper recording system. (A photograph of Jansky with his antenna in Holmdel appears in the documentation of a related device, the .

After recording signals from all directions for several months, Jansky eventually categorized them into three types of static: nearby thunderstorms, distant thunderstorms, and a faint steady hiss of unknown origin. He spent over a year investigating the source of the third type of static. The location of maximum intensity rose and fell once a day, leading Jansky to initially surmise that he was detecting radiation from the Sun.

After a few months of following the signal, however, the brightest point moved away from the position of the Sun. Jansky also determined that the signal repeated on a cycle of 23 hours and 56 minutes. This four-minute lag is a typical astronomical characteristic of any "fixed" object located far from our solar system (see ). By comparing his observations with optical astronomical maps, Jansky concluded that the radiation was coming from the and was strongest in the direction of the center the galaxy, in the of Sagittarius.

His discovery was widely publicized, appearing in the "" of . [cite news | author = Smothers, Ronald | title = Commemorating a Discovery in Radio Astronomy
date = 1998-06-09 |work = | url = http://query.nytimes.com/gst/fullpage.html?res=9804E3DE153AF93AA35755C0A96E958260 | accessdate = 2008-08-14] He published his classic paper "Electrical disturbances apparently of extraterrestrial origin" in Proc. IRE in 1933. This paper was re-printed in Proc. IEEE in 1984 (for their centennial issue, where they note the research most likely would have won a Nobel prize, had not the author died young) and again in 1998, for the first centennial of radio. Jansky wanted to follow up on this discovery and investigate the radio waves from the Milky Way in further detail. He submitted a proposal to Bell Labs to build a 30 meter diameter with greater sensitivity that would allow more careful measurements of the structure and strength of the radio emission. Bell Labs, however, rejected his request for funding on the grounds that the detected emission would not significantly affect their planned transatlantic communications system. Jansky was re-assigned to another project and did no further work in the field of astronomy.

Several scientists were interested by Jansky's discovery, but radio astronomy remained a dormant field for several years, due in part to Jansky's lack of formal training as an astronomer. His discovery had come in the midst of the , and observatories were wary of taking on any new and potentially risky projects.

Two men who learned of Jansky's 1933 discovery were of great influence on the later development of the new study of radio astronomy: one was , a radio engineer who singlehandedly built a in his back yard in 1937 and did the first systematic survey of astronomical radio waves. The second was Prof. , who, after , started a radio observatory at and wrote a textbook on radio astronomy, still considered a standard by many radio astronomers.

In honor of Jansky, the unit used by radio astronomers for the strength (or ) of radio sources is the (1 Jy = 10-26 W m-2 Hz-1). Jansky crater on the is also named after him. The NRAO [http://www.nrao.edu/administration/directors_office/jansky-postdocs.shtml fellowship program] is named after Karl Jansky.

A full-scale replica of Jansky's original rotating telescope is located on the grounds of the NRAO site in , near a reconstructed version of Grote Reber's 9m dish.

The original site of Jansky's antenna (40.365175 deg. N, 74.163705 deg. W) was determined by (the successor of Bell Telephone Laboratories) in the 1990s, and a plaque was placed there honoring the achievement. The original site is located at 101 Crawfords Corner Road, . As mentioned above, a photograph of Jansky with his antennas appears in documentation of .

"Jansky noise" is named after Jansky, and refers to static disturbances of origin.

Jansky was a resident of , and died at age 44 in a hospital due to a heart condition. [cite web | title = "KARL G. JANSKY, 44, AUTHORITY IN RADIO; Bell Laboratories Engineer Dies--Discovered Waves of Extraterrestrial Origin" | url = http://select.nytimes.com/gst/abstract.html?res=F60A1EF73F5B12718DDDAC0994DA405B8089F1D3 , "", , . Accessed , . "Karl Guthe Jansky of 57 Silverton Avenue, Little Silver, N.J., radio research engineer with the Bell Telephone Laboratories since 1928, who discovered radio waves of extraterrestrial origin in 1933 died yesterday in the Riverside Hospital, Red Bank, N.J., of a heart malady."]