Magnus was a son of King Harald III of Norway. He is recorded as the child of Tora Torbergsdatter, who married Harald in 1048.

Magnus' expedition to the west 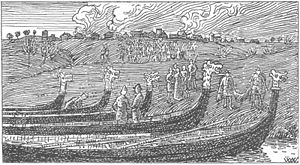 In the late 1050s Magnus led an expedition to the west, to the Northern Isles, the Hebrides, and the Irish Sea. This expedition is only attested in contemporaneous non-Scandinavian sources and is entirely ignored by the sagas. The year in which Thorfinn Sigurdsson, Earl of Orkney, died is nowhere recorded with precision (the Orkneyinga saga states that it was in the latter days of Magnus's father). So it may be that Magnus's expedition was the occasion on which Paul and Erlend Thorfinnsson, Thorfinn's successors as Earl, submitted to King Harald. It has been suggested that Magnus also played some part in the war in Scotland in 1057–1058, perhaps supporting Máel Coluim mac Donnchada against Lulach. In 1058 Magnus and his forces were active in Wales and perhaps in England. According to the Irish Annals of Tigernach, Magnus's goal was to seize power in England, whereas the Anglo-Saxon Chronicle appears to associate the Norwegian fleet with the return to power of Earl Ælfgār. The Annales Cambriae appear to support the Chronicle version, stating that Magnus Haraldsson laid waste to parts of England in support of Gruffydd ap Llywelyn, Ælfgār's son-in-law and ally.

In 1066, King Harald made his ill-fated bid to conquer England. Before departing, he made Magnus regent, and caused him to be crowned King of Norway. Harald's younger son, Olaf, accompanied him on the expedition. Harald was defeated and killed at Battle of Stamford Bridge by the Saxon King Harold Godwinson. However, Olaf survived and spent the winter of 1066–1067 in Orkney,

Division of the Kingdom of Norway

At that time, the Kingdom of Norway was looked upon as a property of the king. Under Norwegian property laws, it would be divided among his heirs, like any private estate. Olaf returned to Norway in the spring of 1067, claiming his portion of the kingdom. Magnus agreed to divide Norway with Olaf. Magnus was to rule the northern half of the country and Olav the southern. This division was the first of several of partitions of Norway among the sons and heirs of a ruling king.

In 1069, after just a few years in power, Magnus died, apparently of ergot poisoning. This left Olaf as the sole ruler of Norway.

Ancestors of Magnus II of Norway