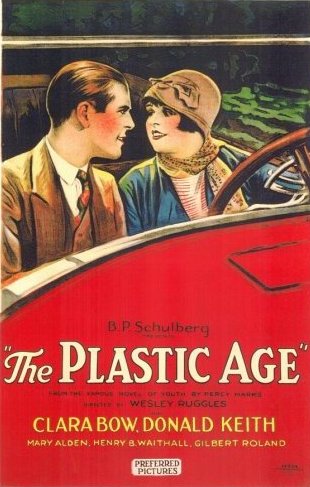 "The Plastic Age" (1925) is a black-and-white starring and . Also appearing in otherwise minor, uncredited roles are future film stars , , and . The film survives today not only on film, but also on and . The film was based on the best-selling 1924 novel "" by Percy Marks. It was adapted for the screen by .

Hugh Carver is an athletic star and a freshman at Prescott College. He falls in love with Cynthia Day, a popular girl who loves to go to parties. He finds that it is impossible to please her and still keep up with his studies and his athletic training, and soon the two face some difficult decisions.

"The Plastic Age" was based on a book of the same name written by Dartmouth professor Percy Marks and published in 1924. It was Preferred Pictures' biggest money-maker to date and a huge hit with audiences.

The copy reviewed is Image Entertainment's DVD version produced by and his company Film Preservation Associates, offered as a double-feature DVD with "" (1926). It was mastered from a 16mm print. The music score by Eric Beheim uses original arrangements of authentic music of the period. [cite web
url = http://www.silentsaregolden.com/featurefolder4/pacommentary.html
title = Commentary on The Plastic Age
publisher = www.silentsaregolden.com
accessdate = 2007-01-26]