Miyagi Prefecture (宮城県, Miyagi-ken?) is a prefecture of Japan in the Tōhoku Region on Honshu island.[1] The capital is Sendai.[2]

Miyagi Prefecture was formerly part of the province of Mutsu.[3] Mutsu Province, on northern Honshu, was one of the last provinces to be formed as land was taken from the indigenous Emishi, and became the largest as it expanded northward. The ancient capital was in modern Miyagi Prefecture.

In the third month of second year of the Wadō era (709), there was an uprising against governmental authority in Mutsu Province and in nearby Echigo Province. Troops were promptly dispatched to subdue the revolt.[4]

In Wadō 5 (712), the land of Mutsu Province was administratively separated from Dewa Province. Empress Gemmei's Daijō-kan continued to organize other cadastral changes in the provincial map of the Nara period, as in the following year when Mimasaka Province was divided from Bizen Province; Hyūga Province was sundered from Osumi Province; and Tamba Province was severed from Tango Province.[4]

During the Sengoku period various clans ruled different parts of the province. The Uesugi clan had a castle town at Wakamatsu in the south, the Nambu clan at Morioka in the north, and Date Masamune, a close ally of the Tokugawa, established Sendai, which is now the largest town of the Tōhoku region.

In the Meiji period, four new provinces were created from parts of Mutsu: Rikuchū, Rikuzen, Iwaki, and Iwashiro.

The area that is now Aomori Prefecture continued to be part of Mutsu until the abolition of the han system and the nation-wide conversion to the prefectural structure of modern Japan.

Date Masamune built a castle at Sendai as his seat to rule Mutsu. In 1871, Sendai Prefecture was formed. It was renamed Miyagi prefecture the following year.

On March 11, 2011, a 9.0 magnitude earthquake and a subsequent major tsunami hit Miyagi Prefecture, causing major damage to the area.[5] The tsunami was estimated to be approximately 10 meters high in Miyagi Prefecture.[6]

On April 7, 2011: 7.4-magnitude earthquake strikes off coast of Miyagi, Japan, Japan's meteorological agency says. Workers were then evacuated from the nearby troubled Fukushima-Daiichi nuclear facility once again, as a tsunami warning was issued for the coastline. Residents were told to flee for inner land at this time.

Officials from the U.S. Geological Survey later downgraded the magnitude to 7.1 from 7.4.[7] 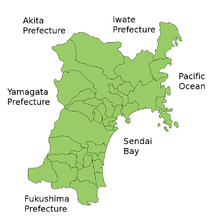 Miyagi Prefecture is in the central part of Tōhoku, facing the Pacific Ocean, and contains Tōhoku's largest city, Sendai. There are high mountains on the west and along the northeast coast, but the central plain around Sendai is fairly large.

Matsushima is known as one of the three most scenic views of Japan, with a bay full of 260 small islands covered in pine groves.

Oshika Peninsula projects from the northern coastline of the prefecture.

There are thirteen cities are in Miyagi Prefecture:

These are the towns and villages in each district:

Although Miyagi has a good deal of fishing and agriculture, producing a great deal of rice and livestock, it is dominated by the manufacturing industries around Sendai, particularly electronics, appliances, and food processing.

As of July 2011, the Japanese government has decided to ban all shipments of beef cattle from northeast Miyagi Prefecture over fears of radioactive contamination.[10]

The sports teams listed below are based in Miyagi Prefecture.

Sendai was the castle town of the daimyo Date Masamune. The remains of Sendai Castle stand on a hill above the city.

Miyagi Prefecture boasts one of Japan's three greatest sights. Matsushima, the pine-clad islands, dot the waters off the coast of the prefecture.

The following are also noted as attractions: 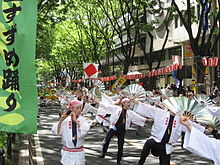 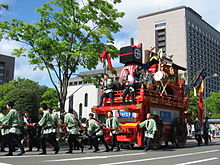 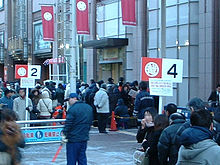