Mie Prefecture (三重県, Mie-ken?) is a prefecture of Japan which is part of the Kansai regions on Honshū island.[1] The capital is the city of Tsu.[2] 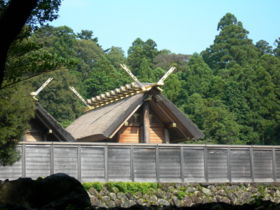 Until the Meiji Restoration, Mie prefecture was known as Ise Province and Iga Province.[3]

Evidence of human habitation in Mie dates back more than 10,000 years. During the Jōmon and Yayoi periods, agricultural communities began to form along the river and coastal areas of the region. Ise Shrine is said to have been established during the Yayoi period, and in the 7th century the Saikū Imperial Residence was built in what is now Meiwa Town to serve as both a residence and administrative centre for the Saiō, an Imperial Princess who served as High Priestess of Ise Shrine.

During the Edo period, the area now known as Mie Prefecture consisted of several feudal domains, each ruled by an appointed lord. Transport networks, including the Tokaido and Ise Roads, were built. Port towns such as Ohminato, Kuwana and Anōtsu, posting stations and castle towns flourished. Pilgrimages to Ise Shrine also became very popular.

After the Meiji Restoration, the former provinces of Ise, Shima, and Iga as well as a portion of eastern Kii, were organized and reorganized repeatedly. In 1871 the area from the Kiso Three Rivers in the north to present-day Tsu became Anōtsu Prefecture, and the area south of that became Watarai Prefecture. In 1872, the Anōtsu prefectural seat moved from Tsu to Yokkaichi, and the prefecture itself was renamed Mie. For a variety of reasons, including the strong likelihood that Mie would eventually merge with Watarai, the prefectural seat returned to Tsu the following year, and Mie Prefecture took its present-day form in 1876, when it merged with its southern neighbor.

The name Mie supposedly was taken from a comment about the region made by Yamato Takeru on his way back from conquering the eastern regions.

In 1959, many lives were lost as parts of Mie were devastated by the Ise-wan Typhoon, the strongest typhoon to hit Japan in recorded history. Crops were destroyed, sea walls ruined, roads and railways damaged and a substantial number of people were injured or left homeless. 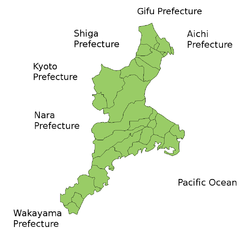 Mie Prefecture forms the eastern part of the Kii Peninsula, and is bordered by Aichi, Gifu, Shiga, Kyoto, Nara, and Wakayama. It is considered to be a part of the Kansai and Tōkai regions due to its geographical proximity to Aichi Prefecture and its cultural influence from Kansai, such as the fact that Kansai dialect is spoken in Mie. Traditionally, though, the Iga region of Mie is considered to have always been a part of Kansai. 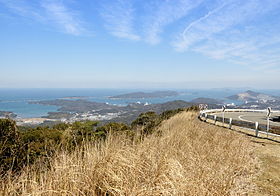 Mie Prefecture measures 170 km (106 mi) from north to south, and 80 km (50 mi) from east to west, and is made up of 5 distinct geographical areas. The north-west of Mie consists of the Suzuka Mountains, along the coast of Ise Bay from the Aichi border to Ise City is the Ise Plain, where most of the population of Mie live, south of the Ise Plain is the Shima Peninsula, bordering Nara in the central-west is the Iga Basin, and running from central Mie to its southern borders is the Nunobiki Mountainous Region.[4]

Mie has a coastline that stretches 1,094.9 km and, as of 2000, Mie's 5,776.44 km² landmass can be divided into 64.8% forest, 11.5% agriculture, 6% residential area, 3.8% roads, and 3.6% rivers. The remaining 10.3% are not classified. The Ise Plain has a relatively moderate climate, averaging 14 to 15 degrees Celsius for the year. The Iga Basin has more daily temperature variance and averages temperatures 1 to 2 degrees cooler than the Ise Plain. Southern Mie, south of the Shima Peninsula, has a warmer Pacific marine climate, with Owase Region having one of the heaviest rainfall figures for all of Japan.[4]

These are the towns and villages in each district.

Mie Prefecture has traditionally been a link between east and west Japan, thanks largely to the Tokaido and Ise Pilgrimage Roads. Traditional handicrafts such as Iga Braid, Yokkaichi Banko Pottery, Suzuka Ink, Iga Pottery and Ise Katagami flourished. With 65% of the prefecture consisting of forests and with over 1,000 km (621 mi) of coastline, Mie has a long been associated with forestry and seafood industries. As well as this, Mie produces tea, beef, cultured pearls and fruit, mainly mandarin oranges. Food production companies include Azuma Foods.[5][6]

Northern Mie is home to a number of manufacturing industries, mainly transport machinery manufacturing (vehicles and ships) and heavy chemical industries such as oil refineries. As well as this, Mie Prefecture is expanding into more advanced industries including the manufacture of semiconductors and liquid crystal displays.