/ˈskɔːˈfɛl/)[1] is the highest mountain in England at 978 metres (3,209 ft). It is located in Lake District National Park sometimes confused with the neighbouring Sca Fell, to which it is connected by the col of Mickledore. The name Pikes of Sca Fell was originally applied collectively to the peaks now known as Scafell Pike, Ill Crag and Broad Crag, which were considered subsidiary tops of Sca Fell (which looks higher from many angles). The contraction Scafell Pike originated as an error on an Ordnance Survey map,[citation needed] but is now standard.

The summit was donated to the National Trust in 1919 by Lord Leconfield in memory of the men of the Lake District "who fell for God and King, for freedom, peace and right in the Great War".[2]

Scafell Pike is one of three British peaks climbed as part of the National Three Peaks Challenge, and is the highest ground for over 90 miles.

Scafell Pike is one of a horseshoe of high fells, open to the south, which surrounds the head of Eskdale, Cumbria. It stands on the western side of the cirque with Sca Fell to the south and Great End to the north. This ridge forms the watershed between Eskdale and Wasdale, which lies to the west.

The narrowest definition of Scafell Pike begins at the ridge of Mickledore in the south, takes in the wide, stony summit area and ends at the next depression, Broad Crag Col, c. 920 m (3,030 ft). A more inclusive view also takes in two further tops, Broad Crag, 934 m (3,064 ft) and Ill Crag, 935 m (3,068 ft), the two being separated by Ill Crag Col. This is the position taken by most guidebooks.[3][4] North of Ill Crag is the more definite depression of Calf Cove 850 m (2,800 ft) before the ridge climbs again to Great End.

Scafell Pike also has outliers on either side of the ridge. Lingmell, to the north west is invariably regarded as a separate fell,[3][4] whilst Pen, 760 m (2,500 ft), a shapely summit above the Esk, is normally taken as a satellite of the Pike. The gloriously un-anatomical Middleboot Knotts is a further top lying on the Wasdale slopes of Broad Crag, which is listed as a Nuttall. 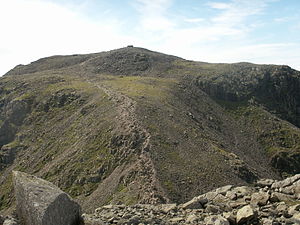 The summit of Scafell Pike, seen from neighbouring Broad Crag

The rough summit plateau is fringed by crag on all sides with Pikes Crag and Dropping Crag above Wasdale and Rough Crag to the east. Below Rough Crag and Pen is a further tier, named Dow Crag and Central Pillar on Ordnance Survey maps, although also known as Esk Buttress among climbers.[5] Esk Buttress and Pikes Crag are well known rock climbing venues.

Broad Crag Col is the source of Little Narrowcove Beck in the east and of Piers Gill in the west. The latter works its way around Lingmell to Wast Water through a spectacular ravine, one of the most impressive in the District. It is treacherous in winter , as when it freezes over it creates an icy patch with lethal exposure should you slip . Broad Crag is a small top with its principle face on the west and the smaller Green Crag looking down on Little Narrowcove. From Broad Crag the ridge turns briefly east across Ill Crag Col and onto the shapel pyramidal summit of Ill Crag. Here the main crags are on the Eskdale side, Ill Crag having little footing in Wasdale.

Scafell Pike has a claim to the highest standing water in England, although Foxes Tarn on Sca Fell is of similar height. The waterbody in question is Broad Crag Tarn, which rather confusingly is on Scafell Pike proper rather than Broad Crag. It lies at about 820 m (2,700 ft), a quarter of a mile south of the summit.[6]

The summit ridge from Ill Crag to Mickledore is notoriously stony, the surface being composed in many places of fields of boulders. Paths are not marked by the usual erosion of soil, but by coloured marks on the rock following the passage of many thousands of booted feet. The summits of Ill and Broad Crags are bypassed by the ridge path, but it leads unerring to the highest point. This bears an Ordnance Survey triangulation column beside a massive cairn. This is not now in the best of repair, but is unmistakable from any distance, still six feet high and much greater in diameter. A little distance away is the lower south peak, a place to escape the crowds and marvel at the view over Eskdale.

Scafell Pike consists of igneous rock dating from the Ordovician geologically part of the Borrowdale Volcanics. The summit plateau of Scafell Pike, and that of other neighbouring peaks, is covered with shattered rock debris which provides the highest altitude example of a summit boulder field in England.[7] The boulder field is thought to have been caused in part by weathering, such as frost action. Additional factors are also considered to be important, however opinion varies as to what these may be. Clifton Ward suggested that weathering with earthquakes as a secondary agent could be responsible, while J E Marr and R A Daly believed that earthquakes were unnecessary and suggested that frost action with other unspecified agents was more likely.[8] To the north of the summit are a number of high altitude gills which flow into Lingmell Beck. These are good examples in Cumbria for this type of gill and are also biologically important due to their species richness.[7]

The ascent of the Pike is most often attempted from Wasdale Head. This is at the north end of Wastwater to the west of the Pike, and is at about 80 metres above sea level. There is a famous climber's hotel here, the Wasdale Head Inn, made popular in the Victorian period by Owen Glynne Jones and others. On summer weekends, crowds of people can be found attempting this steep but straightforward walk. An alternative ascent from Wasdale approaches up a hanging valley whose head is at Mickledore, which is itself ascended, before following the path from Sca Fell to the Pike. 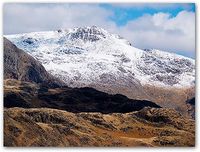 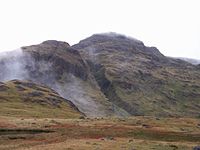 A more taxing, but scenically far superior, approach begins at Seathwaite Farm at the end of Borrowdale, proceeding via Styhead Tarn, then taking the Corridor Route (formerly known as the Guides Route), a delightful walk along the western flank of the Sca Fell massif with intimate views of the fell, before joining the route from Wasdale near the summit. The return journey can then be made along a high ridge, taking in any or all of the neighbouring summits of Broad Crag, Ill Crag, Great End, Allen Crags and Glaramara. An alternative route from Borrowdale, longer but perhaps less taxing than that via the Corridor Route, runs from Seathwaite via Grains Gill and the high pass of Esk Hause. 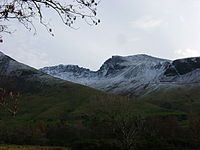 Scafell Pike (left) and Sca Fell (right), with the ridge of Lingmell in the foreground.

A further ascent may be made from Langdale. From the Old Dungeon Ghyll hotel, the route proceeds up alongside Rossett Gill (which perhaps has a more fearsome reputation than it deserves), past Angle Tarn, and then onto Esk Hause before joining a rocky path to the summit. Energetic walkers can vary the return route by ascending Esk Pike and Bowfell from Esk Hause and then come down the Bowfell Band. Another variant which avoids simply returning down Rossett Gill is to head north at the Angle Tarn, over Rossett Pike to join The Cumbrian Way, and descend via Stake Pass adding a mile to the walk. The total distance is about 21 kilometres. Esk Hause is also accessible from Styhead Tarn, making another possible route from Seathwaite.

Another ascent can be made from Eskdale, the longest and most arduous way up but it has some very fine scenery. The route follows the River Esk as far as the Great Moss boggy plateau; walkers then have a choice of ascending steeply up to Mickledore, the low ridge between Sca Fell and Scafell Pike, or following the Esk to its source at Esk Hause. A third possible route up from Great Moss is Little Narrowcove, a steep ascent which emerges onto the ridge a few hundred metres north-east of the summit.

The view from Scafell Pike

A panorama from the summit of Scafell Pike, August 2007 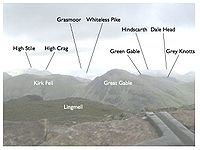 View from the summit of Scafell Pike

As the highest ground in England, Scafell Pike naturally has a very extensive view, ranging from the Mourne Mountains to Snowdonia. On a clear day, the following Marilyns can be seen from the summit.

Data from the first 'external link' below.