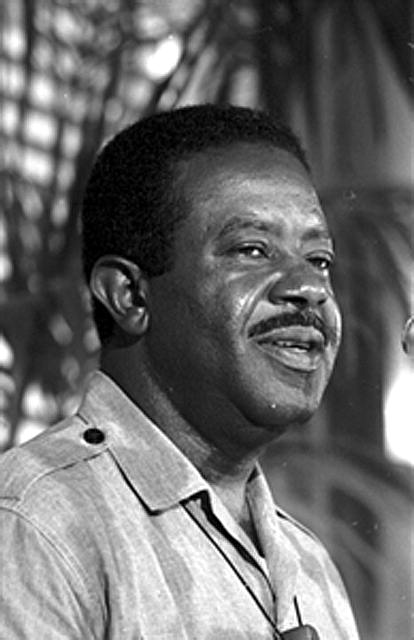 Ralph David Abernathy ( – ) was an American activist and leader and a close associate of in the . Following King's assassination, Abernathy took up the leadership of the SCLC and led the march on that had been planned for May 1968.

Abernathy was born the son of a farmer in . After serving in the army during , he enrolled at , in , graduating with a degree in in 1950. His involvement in political activism began in college while he was a member of Fraternity, when he led demonstrations protesting the lack of heat and hot water in his dormitory and the dreadful food served in the cafeteria. In 1951 he earned a M.A. in from (later Clark Atlanta University) and then became pastor of the First Baptist Church in Montgomery, Alabama. While living in Montgomery he formed a close and enduring partnership with Dr. .

In 1955, when refused to move to the back of the bus, Abernathy and King organized the bus boycott in Montgomery. After a year of the boycott, it finally ended when the affirmed the 's ruling that segregation on buses was .

Abernathy was 's Number Two in the , holding the official title of Secretary-Treasurer. Abernathy was with Martin Luther King in when King was assassinated; in fact, they shared Room 306 at the the night before.

Abernathy assumed the presidency of the SCLC after King's death. Less than a week after the assassination, Abernathy led a march to support striking sanitation workers in . In May 1968 he, among others including , organized the Poor People's Campaign (PPC) March on Hoping to bring attention to the plight of the nation's impoverished, he constructed huts in the nation's capital, precipitating a showdown with the police. The settlement was named "Resurrection City". (Abernathy himself slept in a hotel during the campaign.) On June 19 he held a speech at the , in front of tens of thousands of black and white citizens.

The PPC campaign at Resurrection City had a hard time achieving its objectives and maintaining morale among the residents of the "city". Its demands were seen as unreasonable, and many saw the campaign it as fundamentally challenging the capitalist system of the U.S.. Weeks of rainy weather, and the assassination of Robert Kennedy on June 5th, contributed to a decline in the morale and an increase in civil disorder and crime within the settlement. On June 24, the federal government brought bulldozers in, using force to disband the protesters and demolish Resurrection City. Abernathy was jailed for nearly three weeks for refusing to comply with orders to voluntarily disband the protest.

On June 15, 1969, the eve of the launch of , Abernathy arrived at Cape Canaveral together with several hundred members of the Poor People's Campaign to protest the money being spent on space exploration, while so many people remained poor. He was met by , the administrator of NASA, who he told that in the face of such suffering, space flight represented an inhuman priority and funds should be spent instead to feed the hungry, clothe the naked, tend the sick, and house the homeless. Paine told Abernathy that the advances in space exploration were child's play compared to the tremendously difficult human problems of the society, and told him that "if we could solve the problems of poverty by not pushing the button to launch men to the moon tomorrow, then we would not push that button." On the day of the launch, Abernathy led a small group of protesters in the restricted guest viewing area of the space center, chanting, "We are not astronauts, but we are people." The protest, which had originally been planned by Martin Luther King, failed to generate any support for Abernathy's cause.

Abernathy resigned in 1977 to run unsuccessfully for a Georgia congressional seat.

In 1980, Abernathy was the most prominent African American to endorse , along with and . Abernathy later said he was very disappointed with the Reagan administration's civil rights policies, and he did not endorse him for reelection in 1984.

In the 1980s Abernathy co-founded the , with . The AFC received major funding from 's and works in partnership with "", , the , and other Unification Church related organizations. [cite news |author=Kim A. Lawton |title=CT Classic: Unification Church Ties Haunt New Coalition |url=http://www.christianitytoday.com/ct/2001/132/36.0.html |work=Christianity Today|date=August 2001 |accessdate=2008-02-12] Abernathy served as Vice President of until his death in 1990.

Abernathy and his wife, Juanita, had four children. His younger son, Ralph David served as a Georgia State representative, his youngest daughter, Donzaleigh, is an actress and writer. Abernathy died on in Atlanta.

Abernathy received many awards, most notably honorary degrees from in New York, in Atlanta, in Michigan, and his alma mater, Alabama State University. and Abernathy Road, in Atlanta, are named in his honor.

* [http://www.booknotes.org/Transcript/?ProgramID=1442 "Booknotes" interview with Abernathy on "And the Walls Came Tumbling Down", October 29, 1989.]