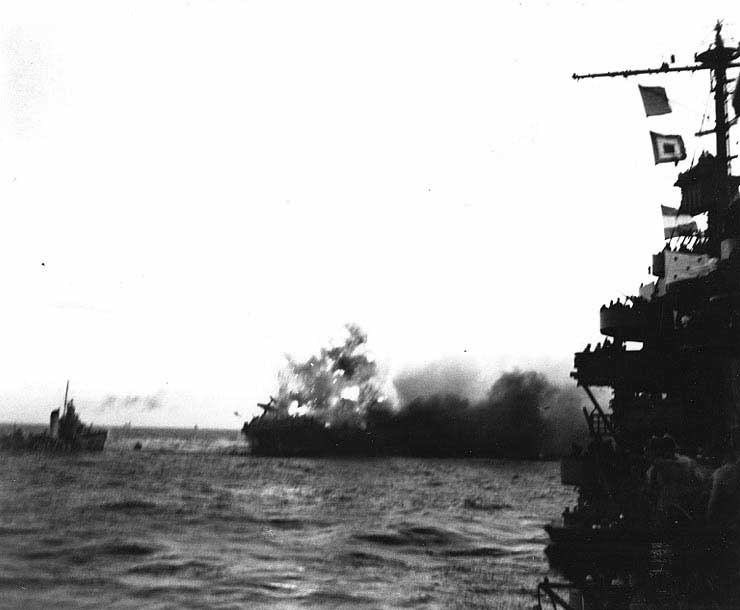 right|thumb|250px|USS_Lexington_explodes_during_the_.] This is a list of military engagements of encompassing land, naval, and air engagements as well as campaigns, operations, defensive lines and sieges. Campaigns generally refer to broader strategic operations conducted over a large bit of territory and over a long period of time. Battles generally refer to short periods of intense combat localised to a specific area and over a specific period of time. However, use of the terms in naming such events is not consistent. For example, the Battle of the Atlantic was more or less an entire theatre of war, and the so-called battle lasted for the duration of the entire war. Another misnomer is the , which by all rights should be considered a campaign, not a mere battle.

* - war conducted with great speed or force by Germans early in the war
** Invasion of Poland - German Case White ("") - see
** Battle of the Atlantic - the campaign that pitted the German Navy's ("'s") and s against Allied s from North America and the South Atlantic to the and the - the convoys were protected mainly by the British and and the and - both the and were later aided by ships and aircraft of the United States. The German U-boats were joined by Italian s after entered the war in June 1940.
** - period of little activity on Western Front between the Invasion of Poland and the Battle of France - also known comically as "Sitzkrieg"
** - see also
*** German Weser Exercise ("Unternehmen Weserübung") - German invasion of Denmark and Norway
*** - British, French, and Polish occupation of Norway to counter the German invasion
** - British Operation Fork
** - German Case Yellow ("Fall Gelb")
** - German invasion of Britain from the air and by the sea
*** ("Unternehmen Seelöwe") - planned amphibious invasion of Britain
* Mediterranean Theatre
** - A series of battles between the Italian Navy and the Commonwealth forces.
**
*** - Italian invasion of Greece from Albania and Greek counter-offensive which drove the Italians back into Albania
*** - German "Directive Number 25" ("Directive n. 25")
*** Invasion of Greece - German Operation Marita ("Unternehmen Marita")
*** - German Operation Mercury ("Unternehmen Merkur").
*** Yugoslavian Front - civil war between Yugoslavian Partisans and the Yugoslavian Army in the Fatherland ("") - with both sides also confronting forces from , , , , , Croatia, and Serbia
***
** Southern France Campaign - Allied Operation Dragoon
** Italian Campaign
*** - Airborne invasion of .
***
* Eastern Front
** Invasion of the Soviet Union - German ("Unternehmen Barbarossa") - the invasion of the Soviet Union and Soviet-held territories by the forces of , , , , , , and
** - The Russo-Finnish continuation of the
* Western Front
** ("Operation Overlord", ETO: "Normandy Campaign")
** Northern France Campaign
** (ETO: "Rhineland Campaign", "Ardennes-Alsace Campaign")

*
** - Japanese invasion of mainland .
*
** First Invasion of French Indochina - was an attempt by the , to prevent from importing arms and fuel.
** - was fought between and over certain areas of that had once belonged to .
** Second Invasion of French Indochina
*
**
*** - The ese surprise air attack on the U.S Pacific fleet which drew the into WW2.
***
***
**
***
***Borneo Campaign
* South-East Asian Theatre
**
**
* - invasion of Japanese-held .
* Japan Campaign - Series of air attacks on the and planned invasion of .

* East African Campaign
* or "The Desert War"
** - Allied battles against the Italian colonies.
** - the British-American invasion of -held and
**
**
* West African campaign
*

"General"'
*
* for the overall impact of the bombing.