The Flag of England is the St George's Cross (heraldic blazon: Argent, a cross gules). The red cross appeared as an emblem of England during the Middle Ages and the Crusades (although originally a white cross on red background) and is one of the earliest known emblems representing England.[2] It also represents the official arms of the Most Noble Order of the Garter, and it achieved status as the national flag of England during the sixteenth century.[1]

Saint George became the patron saint of England in the thirteenth century, and the legend of Saint George slaying a dragon dates from the twelfth century.

At the beginning of the Crusades the Pope decided English crusaders would be distinguished by wearing a white cross on red, and French crusaders a red cross on white (Italian knights were allocated a yellow cross on a white background),[3] English knights soon decided to claim "their" cross of red on white, like the French. In January 1188, in a meeting between Henry II of England and Philip II of France, the two rivals agreed to exchange flags (France later changed its new white cross on red for a white cross on a dark blue flag).[4] Some French knights carried on using the red cross however, and as English knights wore this pattern as well, the red cross on white became the typical crusader symbol regardless of nationality.[5]

Saint George seen in the act of slaying the dragon. He is depicted wearing a surcoat displaying the St George's Cross

The flag appeared during the Middle Ages. The St George's Cross was used as an emblem (but not as a flag) of England was in a roll of account relating to the Welsh War of 1275.[1] The English royalist forces at the Battle of Evesham in 1265 used a red cross on their uniforms, to distinguish themselves from the white crosses used by the rebel barons at the Battle of Lewes a year earlier.

The use of a red cross on a white background was a symbol of St. George in the Middle Ages. This is seen, for example, in the flag of Georgia, another country with Saint George as their patron saint. St George's cross may not have achieved the full status of national flag until the sixteenth century, when all other saints' banners were abandoned during the Reformation. Thereafter it became recognised as the flag of England and Wales. The earliest record of St George's Cross at sea, as an English flag in conjunction with royal banners but no other saintly flags, was 1545.[1]

"The St. George's flag, a red cross on a white field, was adopted by England and the City of London in 1190 for their ships entering the Mediterranean to benefit from the protection of the Genoese fleet. The English Monarch paid an annual tribute to the Doge of Genoa for this privilege."[6]
HRH The Duke of Kent 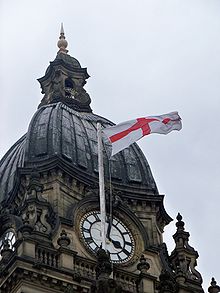 English Rugby team supporter waving the English flag in the streets of Nantes, France in 2007.

The flag is also seen during other sporting events in which England competes, for example during England Cricket matches (the Cricket World Cup and The Ashes), during Rugby Union matches[7] and in football.[8] It is also used in icons on the Internet and on the TV screen to represent teams and players from England.

Before 1996, most of the flags waved by supporters were Union Flags (it is now arguable that this situation has now reversed).[9]

Churches belonging to the Church of England (unless for special reasons another flag is flown by custom) may fly St George's Cross. The correct way (since an order from the Earl Marshal in 1938) is for the church to fly the St George's cross, with the arms of the diocese in the left-hand upper corner of the flag.[10]

Flag of the City of London

The White Ensign of the United Kingdom, consisting of the flag of Saint George, defaced with the Union Flag in the first quarter

The flag of the City of London is based on the English flag, having a centred St George's Cross on a white background, with a red sword in the upper hoist canton (the top left quarter). The sword is believed to represent the sword that beheaded Saint Paul who is the patron saint of the city.[11]

The flag used by the British Royal Navy (the White Ensign) is also based on the flag of England, consisting of the St George's Cross and a Union Flag in the canton. In addition to the United Kingdom, several countries in the Commonwealth of Nations also have variants of the White Ensign with their own national flags in the canton, with the St George's Cross sometimes being replaced by a naval badge.[12]

Perceived association with the far right

For many years, the Cross of St George had come to be associated by some with far-right political groups such as the British National Party and the National Front. Many people consider this association to be unjustified as it is the Union Flag which is predominantly used by groups such as the British National Party.[13] The Cross of St George is often used by far-right groups, usually alongside the individual flags of Wales, Scotland and Northern Ireland. However, the frequent use of the English flag by sports supporters and other groups has gone some way to disassociate the flag from any lingering association with the far-right and the Cross of St George is now frequently flown throughout the country. Despite this, displaying the flag remains controversial to a minority of people in England[14]

Some minorities living in England have stated that they still view the flag with suspicion: during a poll of readers of New Nation, "most black people interviewed said they felt alienated by the flag of St George and still associated it with the BNP".[14] However, many young, non-white people do display the flag, particularly for sporting events .[15]

Incorporation into the Union Flag

The Flag of England flying alongside the Flag of the United Kingdom.