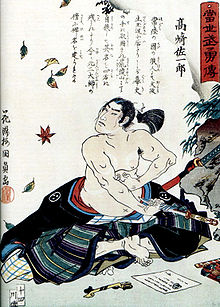 Ukiyo-e woodblock print of warrior about to perform seppuku, from the edo period.

If a living creature is disemboweled, it is invariably fatal without medical attention. Historically, disembowelment has been used as a severe form of capital punishment. If the intestinal tract alone is removed, death follows after several hours of severe pain. However, in some forms of intentional disembowelment, decapitation and/or the removal of the heart and lungs would sooner end the victim's life.

In Japan, disembowelment played a central part as a method of execution or the ritualized suicide of a samurai. In killing themselves by this method, they were deemed to be free from the dishonor resulting from their crimes. The most common form of disembowelment was referred to in Japanese as seppuku (or, colloquially, hara-kiri), literally "stomach cutting," involving two cuts across the abdomen, sometimes followed by pulling out one's own viscera. The act of decapitation by a second (kaishaku-nin) was added to this ritual suicide in later times in order to shorten the suffering of the samurai or leader, an attempt at rendering the ritual more humane. Even later the knife was just a simple formality and the swordsman would decapitate before the subject could reach for it. The commission of a crime or dishonorable act was only one of many reasons for the performance of seppuku; others included the atonement of cowardice, as a means of apology, or following the loss of a battle or the surrender of a castle.

Various account have asserted that during the Vietnam War, members of the Viet Cong sometimes made calculated use of disembowelment as a means of psychological warfare, to coerce and intimidate rural peasants.[1][2][3][4] Peer De Silva, former head of the Saigon department of the Central Intelligence Agency (CIA) wrote that as early as 1963 Viet Cong units were using disembowelment and other methods of mutilation as psychological warfare.[5] However, the extent to which this punishment was perpetrated may be impossible to gauge, and it should be pointed out that while detailed accounts survive regarding how civilians were disemboweled by Viet Cong, application of this torture appears to have been quite arbitrary, and there is no record that such actions were sanctioned by the North Vietnamese government in Hanoi. Disembowelment and other methods of intimidation and torture were intended to frighten civilian peasants at a local level into cooperating with the Viet Cong or discourage them from cooperating with the South Vietnamese Army or its allies.[3][5]

Belgium and the Netherlands

In the Netherlands and Belgium the vierendelen (literally "to divide in four"), a practice where the arms and legs were tied to horses and the abdomen was sliced open. This punishment was exclusively for regicide.[citation needed]

Catholic tradition states that Erasmus of Formiae, also known as Saint Elmo, was finally executed by disembowelment in about A.D. 303, after he had suffered extreme forms of torture during the persecutions of Emperor Diocletian and Maximian. However, it is also acknowledged that this portion of the account may be more legend than fact.[6] 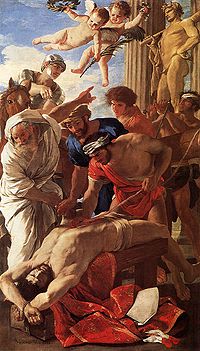 In England, the punishment of being "hanged, drawn and quartered" was typically used for men convicted of high treason. This referred to the practice of drawing a man by a hurdle (similar to a fence) through the streets, removing him from the hurdle and hanging him from the neck (but removing him before death), disemboweling him slowly on a wooden block by slitting open his abdomen, removing his entrails and his other organs, and then decapitating him and dividing the body into four pieces. The man's head and quarters would often be parboiled and displayed as a warning to others. As part of the disembowelment, the man was also typically castrated and his genitals and entrails would be burned. Women who were accused of high treason were, for modesty's sake, instead burned at the stake. On the Isle of Man this "mercy" was denied to them and women convicted of treason were also hanged, drawn and quartered.[citation needed]

When a portion of the intestinal tract is forcefully pulled from or expelled from the body through the anus, it is referred to as transanal evisceration. Cases of transanal evisceration of children whilst sitting over uncovered swimming pool drains have been reported; notable cases include Valerie Lakey (1993) and Abigail Taylor (2007). In Taylor's case, the suction dislodged and damaged her liver and pancreas; several meters of small intestine were forcefully pulled through her anus. In both of these cases, the victims were left with short bowel syndrome and required feeding by total parenteral nutrition. After multiple operations, Taylor later died from transplant-related cancer.[7][8]

A person (usually a child) can suffer a similar injury if a heavy weight (such as a vehicle) is applied directly over the abdomen. The downward pressure forces a portion of the intestine to burst from the anus.

The short story "Guts" from the book Haunted by Chuck Palahniuk is based on the concept of transanal evisceration.

In Japanese folklore, it was believed that some malicious Kappa, water-goblins that inhabited ponds and rivers, might thrust a hand in the anus of a human swimmer, seeking a mythical sphere called a shirikodama.

The process of embalming sometimes includes removing the internal organs.

A notable example of this is during mummification, especially as practised by the ancient Egyptians. It entailed removal of the internal organs prior to the preservation of the remainder of the body. The organs removed were embalmed, stored in canopic jars, and placed in the tomb with the body.