Norma is a tragedia lirica or opera in two acts by Vincenzo Bellini with libretto by Felice Romani after Norma, ossia L'infanticidio (Norma, or The Infanticide) by Alexandre Soumet. First produced at La Scala on December 26, 1831, it is generally regarded as an example of the supreme height of the bel canto tradition. "Casta diva" was one of the most familiar arias of the nineteenth century.

In a letter dated September 1, 1831, Bellini wrote to the soprano Giuditta Pasta that "Romani believes [that this subject] will be very effective, and absolutely ideal for your encyclopedic character, because that is the kind of character Norma has". Indeed, Pasta's vocal and dramatic range was encyclopedic: that March, she had created the very different Bellini role of Amina, the lyrically vulnerable Swiss village maiden, in La sonnambula.

In the 19th century, it was common for composers to interpolate arias of their own into other composers' operas. Richard Wagner wrote an aria for bass and men's chorus for an 1837 production of Norma.[1]

The title role is generally considered one of the most difficult in the soprano repertoire. It calls for tremendous vocal control of range, flexibility, and dynamics. It contains a wide range of emotions: conflict of personal and public life, romantic life, maternal love, friendship, jealousy, murderous intent, and resignation. German soprano Lilli Lehmann once famously remarked on how the singing of all three Brünnhildes in Wagner's Der Ring des Nibelungen in one evening was less stressful than the singing of one Norma.[2] However, her less famous reasoning was that "When you sing Wagner, you are so carried away by the dramatic emotion, the action, and the scene that you do not have to think how to sing the words. That comes of itself. But in Bellini, you must always have a care for beauty of tone and correct emission."

Throughout the 20th century, many singers have attempted the role of Bellini's tormented Druid priestess, with varying degrees of success. The following is a listing of some of the most renowned Normas, each of whom has brought her own strengths and weaknesses to the role. In the early 1920s, Rosa Raisa, Claudia Muzio, and Rosa Ponselle were each admired in the role. The most prolific Norma of the postwar period was Maria Callas, with 89 stage performances (several of which exist on recording), along with two studio recordings (made in 1954 and 1960).

In the 1960s, two very different performers started donning the Druidess's robes: the Australian Dame Joan Sutherland and the Turk Leyla Gencer. Following Sutherland's 1964 debut in the title role, Pavarotti called her "the greatest female voice of all time".[3] In the 1970s, four other bel canto specialists debuted their Normas: Radmila Bakočević, Montserrat Caballé, Beverly Sills, and Renata Scotto. Not to be dismissed lightly are Grace Bumbry and Shirley Verrett, the two famous African-American divas who began as mezzo-sopranos and eventually started singing soprano repertoire 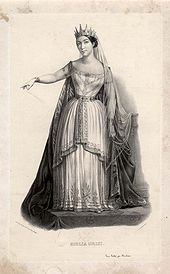 Giulia Grisi as Norma. She created the role of Adalgisa in 1831.

A secret love unites the seeress Norma with Pollione, the Roman proconsul, by whom she has borne two children. But Pollione has grown tired of the aging druidess and has fallen in love with Adalgisa, a young temple virgin. Despite Adalgisa's piety and virtue, she agrees to flee to Rome with Pollione. Adalgisa innocently tells Norma of her love, and Norma curses Pollione for his treachery.

Norma is about to kill her children, but her love for her children finally confides them to the care of Adalgisa. When Pollione comes to take Adalgisa from the temple, Norma denounces him and he is seized by the Druids, after having refused to give up Adalgisa. Norma proclaims herself equally guilty with him. The pyre is lighted, and ascending it, Norma dies with her lover.