Op art
Not to be confused with pop art or plop art. 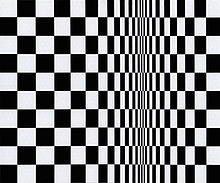 Movement in Squares, by Bridget Riley 1961

Op art, also known as optical art, is a style[1] of visual art that makes use of optical illusions.

"Optical art is a method of painting concerning the interaction between illusion and picture plane, between understanding and seeing."[2] Op art works are abstract, with many of the better known pieces made in only black and white. When the viewer looks at them, the impression is given of movement, hidden images, flashing and vibration, patterns, or alternatively, of swelling or warping. 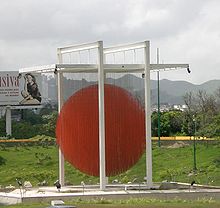 Op art is derived from the constructivist practices of the Bauhaus. This German school, founded by Walter Gropius, stressed the relationship of form and function within a framework of analysis and rationality. Students were taught to focus on the overall design, or entire composition, in order to present unified works. When the Bauhaus was forced to close in 1933, many of its instructors fled to the United States where the movement took root in Chicago and eventually at the Black Mountain College in Asheville, North Carolina, where Anni and Josef Albers would come to teach.[citation needed]

The term first appeared in print in Time magazine in October 1964,[3] though works which might now be described as "op art" had been produced for several years previously. For instance, Victor Vasarely's painting, Zebras (1938), is made up entirely of curvilinear black and white stripes that are not contained by contour lines. Consequently, the stripes appear to both meld into and burst forth from the surrounding background of the composition. Also the early black and white Dazzle panels of John McHale installed at the This Is Tomorrow exhibit in 1956 and his Pandora series at the Institute of Contemporary Arts in 1962 demonstrate proto-op tendencies. 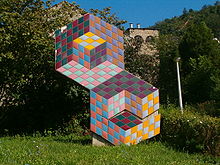 In the 1960s Arnold Schmidt (Arnold Alfred Schmidt) had several solo exhibitions of his large, black and white shaped optical paintings exhibited at the Terrain Gallery in New York.[4]

In 1965, between February 23rd and April 25th an exhibition called The Responsive Eye, created by William C. Seitz was held at the Museum of Modern Art in New York City.[5] The works shown were wide ranging, encompassing the minimalism of Frank Stella and Ellsworth Kelly, the smooth plasticity of Alexander Liberman, the collaborative efforts of the Anonima group, alongside the well-known Victor Vasarely, Richard Anuszkiewicz, and Bridget Riley. The exhibition focused on the perceptual aspects of art, which result both from the illusion of movement and the interaction of color relationships. The exhibition was enormously popular with the general public, though less so with the critics.[6] Critics dismissed op art as portraying nothing more than trompe l'oeil, or tricks that fool the eye. Regardless, op art's popularity with the public increased, and op art images were used in a number of commercial contexts. Bridget Riley tried to sue an American company, without success, for using one of her paintings as the basis of a fabric design.[citation needed]

The Op Art movement got a new lease of life in the first decade of the twenty-first century as new forms started once again emerging. In 2005, Indian artist, Devajyoti Ray started a new genre of art called Pseudorealism. Though the concept and the name of the movement was brought from the film-world, much of Pseudorealism depends on the intuitive use of colours and understanding the relationships between them.

Black & white and the figure-ground relationship

Op art is a perceptual experience related to how vision functions. It is a dynamic visual art, stemming from a discordant figure-ground relationship that causes the two planes to be in a tense and contradictory juxtaposition. Op art is created in two primary ways. The first, and best known method, is the creation of effects through the use of pattern and line. Often these paintings are black and white, or otherwise grisaille, as in Bridget Riley's famous painting, Current (1964), on the cover of The Responsive Eye catalogue; here, black and white wavy lines are placed close to one another on the canvas surface, creating such a volatile figure-ground relationship that one's eyes begin to hurt. Getulio Alviani chose aluminium surfaces, treated in order to create patterns of light which change as the watcher moves (vibrating texture surfaces). Another reaction that occurs is that the lines create after- images of certain colors due to how the retina receives and processes light. As Goethe demonstrates in his treatise Theory of Colours, at the edge where light and dark meet, color arises because lightness and darkness are the two central properties in the creation of color.[citation needed]

Beginning in 1966 Bridget Riley began to produce color-based op art,[7] however, other artists, such as Julian Stanczak and Richard Anuszkiewicz, were always interested in making color the primary focus of their work.[8] Josef Albers taught these two primary practitioners of the "Color Function" school at Yale in the 1950s. Often, colorist work is dominated by the same concerns of figure-ground movement, but they have the added element of contrasting colors which have different effects on the eye. For instance, in Anuszkiewicz's "temple" paintings, the juxtaposition of two highly contrasting colors provokes a sense of depth in illusionistic three-dimensional space so that it appears as if the architectural shape is invading the viewer's space. 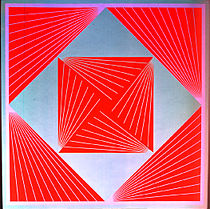 Stanczak's compositions tend to be the most complex of all of the color function practitioners. Taking his cue from Albers and his influential book Interaction of Color, Stanczak deeply investigates how color relationships work. "Stanczak created various spatial experiences with color and geometry; the latter is far easier to discuss. Color has no simple systematized equivalent. Indeed, there may be no way to describe it that is both meaningful and accurate. Descriptions of it (the color wheel or color solids, for example) are all necessary distortions. While color derives from the electromagnetic scale that corresponds to the magnitudes of energy expressed by musical pitch, in fact, the neurological occidentals by which we experience color make it seem multidimensional, while musical pitch (not timbre, volume, or duration) is experienced as a linear relationship...Stanczak's 'gift is for layering. He arranges transparent patterns upon patterns so that you see through them as gauziest screens, each one seeming to fold as if it moves.'"[9]

There are three major classes of the interaction of color: simultaneous contrast, successive contrast, and reverse contrast (or assimilation). (i) Simultaneous contrast may take place when one area of color is surrounded by another area of a different color. In general, contrast enhances the difference in brightness and/or color between the interacting areas...Such contrast effects are mutual, but if the surround area is larger and more intense than the area it encloses, then the contrast is correspondingly out of balance, any may appear to be exerted in one direction only. (ii) In successive contrast, first one color is viewed and then another. This may be achieved either by fixing the eye steadily on one color and then quickly replacing that color with another, or by shifting fixation from one color to another. (iii) In reverse contrast (sometimes called the assimilation of color or the spreading effect) the lightness of white or the darkness of black may seem to spread into neighboring regions. Similarly, colors may appear to spread into or become assimilated into neighboring areas. All such effects tend to make neighboring areas appear more alike, rather than to enhance their differences as in the more familiar simultaneous contrast, hence the term reverse contrast (Jameson and Hurvich, 1974). Note that in the interaction of color the constituent colors retain much of the own identity even though they may be altered somewhat by contrast.

Although being relatively mainstream, photographers have been slow to produce op art. In painting, Victor Vasarely and Bridget Riley were producing large amounts of art and the same can be said for many digital artists, such as Kitaoka. One of the primary reasons for the lack of photographers doing op art, is the difficulty in finding effective subject matter. Laszlo Moholy-Nagy, however, produced photographic op art and taught the subject in the Bauhaus. One of his lessons consisted of making his students produce holes in cards and then photographing them.

Artists known for their op art