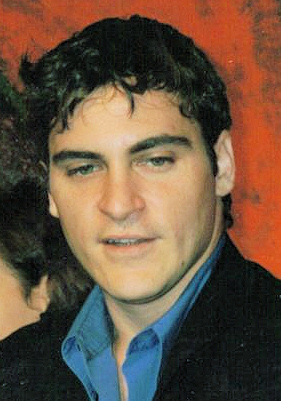 Joaquin Rafael Phoenix (pronEng|waˈkeen ˈfee-nɪks born , ), formerly credited as Leaf Phoenix, is an award-winning American and Puerto Rican . He is from a family of performers and is the younger brother of late actor .

Phoenix has ventured behind a camera, directing s as well as producing movies and television shows, and has recorded an album, the soundtrack to "Walk the Line". He is also known for his work as a social activist, particularly as an advocate for .

His father, John Lee Bottom, was a

His parents eventually became disillusioned with the ; they made the decision to leave the cult and returned to the U.S. in 1978. They changed their last name to "Phoenix" to symbolize a new beginning. This was also around the time Joaquin had begun calling himself "Leaf", desiring to have a similar nature-related name like his siblings (he was inspired by spending time outdoors raking leaves with his dad). This is the name he would use as a child actor; at fifteen, he changed it back to 'Joaquin'. [cite web| author=Paul Fischer| url=http://www.darkhorizons.com/news6/joaquin.htm| title=Gladiator| publisher=Dark Horizons| date=2000| accessdate=2007-08-22]

In order to provide food and financial support for the family, the Phoenix children performed on the streets and at various talent contests, singing and playing instruments. In Los Angeles his mother started working as a secretary for , and his father worked as a landscaper. Joaquin and his siblings were eventually discovered by one of Hollywood's leading children's agents, , who got the five children acting work, mainly doing commercials and television show appearances. [cite web| author=Mary Rourke| url=http://www.latimes.com/news/printedition/california/la-me-burton10apr10,1,885672.story| title=Iris Burton, 77; Hollywood agent represented child actors| publisher=LA Times| date=2008| accessdate=2008-04-11] Phoenix went on to establish himself a child actor before deciding to withdraw from acting for a while and travel to and with his father.

Phoenix came back into public view under tragic circumstances: on , , his brother, , suffered a fatal drug overdose, outside the famed Hollywood nightclub The Viper Room, which was owned by . Joaquin's call to 911 to save his brother was recorded and repeatedly played over the airwaves and on television. The sudden media intrusion into his life proved to be too overwhelming; once again, he retreated from the public eye. A year later, at the insistence of his friends, Joaquin reluctantly re-entered the world of acting. [cite web| author=John Clark| title=Quietly Making a Name| url=http://www.variety.com/article/VR1117971520.html?categoryid=13&cs=1| publisher=Variety Magazine| date=2007-09-6| accessdate=2007-09-07]

Upon being cast as in "" after Cash himself approved, Joaquin responded by buying a guitar and learning how to play. , who portrayed in the film and won a Best Actress Oscar for her performance, stated during an interview that when they first performed in-character before a live audience, she was so impressed with his impersonation that she knew she "had to step it up a notch". All of Cash and Carter's vocal tracks in the movie and on the accompanying soundtrack are played and sung by Phoenix and Witherspoon. In 2005, he was nominated for the Best Actor Oscar, and won a in the same category in 2006.

Joaquin and River became the first brothers in Hollywood history to be nominated for an Academy Award in the acting category.

Phoenix serves as one of the executive producers of a television show called [http://www.directcurrentmedia.com 4Real] , a half-hour series which showcase celebrity guests on global adventures "in order to connect with young leaders who are creating social and economic change." [cite web| title=4 Real| url=http://www.directcurrentmedia.com| publisher=Direct Current Media| accessdate=2007-08-22]

He is also listed as a producer on the movie "".

He recorded the album "Walk the Line" and won a at the for his work on the soundtrack. []

Phoenix has long been a social activist, lending his support to a number of charities and humanitarian organizations, notably [cite web| title=End The Crisis In Darfur| url=http://www.change.org/changes/list_videos/60?main_page=1&video_id=380| publisher=Amnesty International| accessdate=2007-08-22] , [http://www.theartofelysium.org/welcome.html The Art of Elysium] , [http://www.teachhumane.org HEART] ,and [http://www.thepeacealliance.org The Peace Alliance] , an organization which campaigns for a .

Phoenix has been a dedicated since the age of three. He is a member of and the organization , and has actively campaigned on their behalf. He narrated the film "Earthlings" for 'Nation Earth' -- a video about the investigation of animal abuse in factory farms, pet mills, in industry and research. In 2005, he was awarded the "Humanitarian Award" at the for his work and contribution to "Earthlings". [ [http://isawearthlings.com/ I Saw Earthlings.com Cast and Crew ] ]

In 2005, he participated in the documentary [http://imdb.com/title/tt0464062/ I'm Still Here: Real Diaries of Young People Who Lived During the Holocaust] .

Phoenix's parents are divorced. His mother is now married to Jeffrey Weisberg, treasurer and member of the Board of Directors of [http://www.peacealliancefound.org/content/view/47/93/ The Peace Alliance Foundation] . [cite web|url=http://www.peacealliancefound.org/content/view/47/93/| title=Board of Directors| publisher=The Peace Alliance Foundation| accessdate=2007-06-11 ]

The scar above his lip is, contrary to popular belief, a birthmark. Once during his mother's pregnancy, she felt a sharp pain and believes the two events are connected. [cite web| author=Joe Dolce| url=http://www.joaquin-phoenix.net/print/9511details.html| title=Q&A With| publisher=Details Magazine| date=1995-09| accessdate=2007-08-25]