Organisation for Economic Co-operation and Development

Organisation for Economic Co-operation and Development

The Organisation for Economic Co-operation and Development (OECD, French: Organisation de coopération et de développement économiques, OCDE) is an international economic organisation of 34 countries founded in 1961 to stimulate economic progress and world trade. It is a forum of countries committed to democracy and the market economy, providing a platform to compare policy experiences, seek answers to common problems, identify good practices, and co-ordinate domestic and international policies of its members.

The OECD's headquarters are at the Château de la Muette in Paris, France.

The Organisation for European Economic Co-operation (OEEC), was formed in 1948 to administer American and Canadian aid in the framework of the Marshall Plan for the reconstruction of Europe after World War II.[1] It started its operations on 16 April 1948. Since 1949, it has been headquartered in the Chateau de la Muette in Paris, France. After the Marshall Plan ended, the OEEC focused on economic questions.[2]

In the 1950s the OEEC provided the framework for negotiations aimed at determining conditions for setting up a European Free Trade Area, to bring the European Economic Community of the six and the other OEEC members together on a multilateral basis. In 1958, a European Nuclear Energy Agency was set up under the OEEC.

Foundation of the OECD

Enlargement to Central and Eastern Europe

In 1989, after the political changes in Central and Eastern Europe, the OECD started to assist these countries to prepare market economy reforms. In 1990, the Centre for Co-operation with European Economies in Transition (now succeeded by the Centre for Cooperation with Non-Members) was established, and in 1991, the Programme "Partners in Transition" was launched for the cooperation with Czechoslovakia, Hungary and Poland.[3][4] This programme also included a membership option for these countries.[4] As a result of this, in 1994–2000 Poland, Hungary, Czech Republic and Slovakia as well as Mexico and the Republic of Korea became members of the organisation.

In 2003, the OECD established a working group headed by Japan's Ambassador to the OECD Seiichiro Noboru to work out a strategy for the enlargement and co-operation with non-members. The working group proposed that the selection of candidate countries to be based on four criteria: "like-mindedness", "significant player", "mutual benefit" and "global considerations". The working group's recommendations were presented at the OECD Ministerial Council Meeting on 13 and 14 May 2004. Based on these recommendations work, the meeting adopted an agreement on operationalisation of the proposed guidelines and on the drafting of a list of countries suitable as potential candidates for membership.[3] As a result of this work, on 16 May 2007, the OECD Ministerial Council decided to open accession discussions with Chile, Estonia, Israel, the Russian Federation and Slovenia and to strengthen co-operation with Brazil, China, India, Indonesia and South Africa through a process of enhanced engagement.[5] On May 7, 2010, Chile became the organization's 31st member.[6] On July 21, 2010, Slovenia became the 32nd member.[7] On September 7, 2010, Israel became the 33rd member.[8] On December 9, 2010, Estonia became the 34th member. 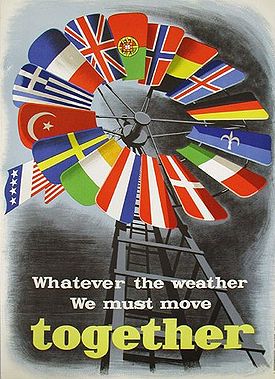 The OECD defines itself as a forum of countries committed to democracy and the market economy, providing a setting to compare policy experiences, seek answers to common problems, identify good practices, and co-ordinate domestic and international policies.[9] Its mandate covers economic, environmental, and social issues. It acts by peer pressure to improve policy and implement "soft law"—non-binding instruments that can occasionally lead to binding treaties. In this work, the OECD cooperates with businesses, trade unions and other representatives of civil society. Collaboration at the OECD regarding taxation, for example, has fostered the growth of a global web of bilateral tax treaties.

Between 1995 and 1998, the OECD designed the Multilateral Agreement on Investment, which was abandoned because of a widespread criticism from civil society groups and developing countries. In 1976, the OECD adopted the Declaration on International Investment and Multinational Enterprises, which was rewritten and annexed by the OECD Guidelines for Multinational Enterprises in 2000.

Among other areas, the OECD has taken a role in co-ordinating international action on corruption and bribery, creating the OECD Anti-Bribery Convention, which came into effect in February 1999. It has been ratified by thirty-eight countries.[10]

The OECD has also constituted an anti-spam task force, which submitted a detailed report, with several background papers on spam problems in developing countries, best practices for ISPs, e-mail marketers, etc., appended. It works on the information economy[11] and the future of the Internet economy.[12]

The OECD publishes the Programme for International Student Assessment (PISA) which is an assessment that allows for a comparison of educational performances between countries.

The OECD publishes and updates a model tax convention which serves as a template for bilateral negotiations regarding tax coordination and cooperation. This model is accompanied by a set of commentaries which reflect OECD-level interpretation of the content of the model convention provisions. This model generally allocates the primary right to tax to the country from which capital investment originates (i.e., the home, or resident country) rather than the country in which the investment is made (the host, or source country). As a result, it is most effective as between two countries with reciprocal investment flows (such as among the OECD member countries), but can be very unbalanced when one of the signatory countries is economically weaker than the other (such as between OECD and non-OECD pairings).

Since 1998, the OECD has led a charge against harmful tax practices, principally targeting the activities of tax havens (while principally accepting the policies of its member countries which would tend to encourage tax competition). These efforts have been met with mixed reaction: the primary objection is the sanctity of tax policy as a matter of sovereign entitlement.[13] The OECD maintains a 'blacklist' of countries it considers uncooperative in the drive for transparency of tax affairs and the effective exchange of information, officially called "The List of Uncooperative Tax Havens".[14] In May 2009, all remaining countries were removed from the list.[15]

On 22 October 2008, at an OECD meeting in Paris, 17 countries led by France and Germany decided to draw up a new blacklist of tax havens. The OECD has been asked to investigate around 40 new tax havens in the world where undeclared revenue is hidden and which host many of the non-regulated hedge funds that have come under fire during the 2008 financial crisis. Germany, France and other countries called on the OECD to specifically add Switzerland to a blacklist of countries which encourage tax fraud.[16]

The OECD publishes books, reports, statistics, working papers and reference materials. All titles and databases published since 1998 can be accessed via OECD iLibrary.

The OECD releases between 300 and 500 books each year. Most books are published in English and French. The OECD flagship titles include:

All OECD books are available on the iLibrary and the online bookshop.

The OECD is known as a statistical agency, as it publishes comparable statistics on a wide number of subjects.

There are 15 working papers series published by the various directorates of the OECD Secretariat. They are available on iLibrary, as well as on many specialised portals.

The OECD is responsible for the OECD Guidelines for the Testing of Chemicals, a continually updated document which is a de facto standard (i.e., soft law).

It has published the OECD Environmental Outlook to 2030, which shows that tackling the key environmental problems we face today—including climate change, biodiversity loss, water scarcity, and the health impacts of pollution—is both achievable and affordable.

Delegates from the member countries attend committees' and other meetings. Former Deputy-Secretary General Pierre Vinde estimated in 1997 that the cost borne by the member countries, such as sending their officials to OECD meetings and maintaining permanent delegations, is equivalent to the cost of running the secretariat.[17] This ratio is unique among inter-governmental organisations. In other words, the OECD is more a persistent forum or network of officials and experts than an administration.

Exchanges between OECD governments benefit from the information, analysis and preparation of the OECD Secretariat. The secretariat collects data, monitors trends, and analyses and forecasts economic developments. Under the direction and guidance of member governments, it also researches social changes or evolving patterns in trade, environment, education, agriculture, technology, taxation and other areas.

The secretariat is organised in Directorates:

The work of the secretariat is financed from the OECD's annual budget, currently[when?] around US$510 million or €342.9 million). The budget is funded by the member countries based on a formula related to the size of each member's gross national product.[18] The largest contributor is the United States, which contributes about one quarter of the budget, followed by Japan with 16%, Germany with 9% and the U.K. and France with 7%. The OECD governing council sets the budget and scope of work on a two-yearly basis.

As an international organisation the terms of employment of the OECD Secretariat staff are not governed by the laws of the country in which their offices are located. Agreements with the host country safeguard the organisation's impartiality with regard to the host and member countries. Hiring and firing practices, working hours and environment, holiday time, pension plans, health insurance and life insurance, salaries, expatriation benefits and general conditions of employment are managed according to rules and regulations associated with the OECD. In order to maintain working conditions which are similar to similarly structured organisations, the OECD participates as an independent organisation in the system of co-ordinated European organisations, whose other members include NATO, the Western European Union and the European Patent Organisation.

Representatives of the 34 OECD member countries and a number of observer countries meet in specialised committees on specific policy areas, such as economics, trade, science, employment, education or financial markets. There are about 200 committees, working groups and expert groups. Committees discuss policies and review progress in the given policy area.[19]

There are currently 34 members of the OECD.

The European Commission participates in the work of the OECD alongside the EU Member States.[21]

Currently, 25 non-members participate as regular observers or full participants in OECD Committees. About 50 non-members are engaged in OECD working parties, schemes or programmes. The OECD conducts a policy dialogue and capacity building activities with non-members (Country Programmes, Regional Approaches and Global Forums) to share their views on best policy practices and to bear on OECD's policy debate. The OECD's Centre for Co-operation with Non-Members develops and oversees the strategic orientations of the relations with non-members.

The OECD explores the possibilities for enhanced co-operation with selected countries and regions of strategic interest to the OECD, giving priority to South East Asia with a view to identifying countries for possible membership.

The OECD has been criticised by several civil society groups and developing countries. The main criticism has been the narrowness of the OECD because of its limited membership to a select few rich nations.[25] In 1997–1998, the draft Multilateral Agreement on Investment was heavily criticized by several non-governmental organisations and developing countries. Many critics argued that the agreement would threaten protection of human rights, labor and environmental standards, and the least developed countries. A particular concern was that the MAI would result in a 'race to the bottom' among countries willing to lower their labor and environmental standards to attract foreign investment. Also the OECD's actions against harmful tax practices has raised criticism. The primary objection is the sanctity of tax policy as a matter of sovereign entitlement.[13]