The Jamaican, Common or Mexican fruit bat (Artibeus jamaicensis) is a fruit bat native to Central and South America, as well as the Greater and many of the Lesser Antilles. It is also an uncommon resident of the Southern Bahamas. Its distinctive features include the absence of an external tail and a minimal, U-shaped interfemoral membrane. 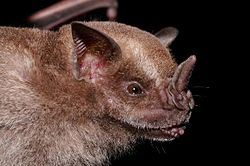 The Jamaican fruit bat is a medium-sized bat, having a total length of 78-89 mm with a 96-150 mm wingspan and weighing 40 to 60 g. The ears tend to be broad, triangular, pointed and separated.[1] It has a short tragus with four or five relatively small serrations on the outer margin. The noseleaf is well-developed with a cluster of sebaceous glands.[2] The lower lip has a central wart with smaller warts surrounding. Upper and lower lips have sebaceous holocrine glands.[2] The dorsal fur varies from ashy gray to ashy brown with white hair bases that show through.[3] The wings of the fruit bat are broad and dark gray in color.[1] The ventral fur is lighter in color. The fruit bat has no external tail and the interfemoral membrane is narrow and hairless with a brief calcar.[1] It also has large canines in comparison to other members of its genus.

The Jamaican fruit bat ranges from Sinaloa and Tamaulipas, Mexico southward to Ecuador, Venezula, Trinidad, Tobago, Greater and Lesser Antilles, Florida Keys and Amazonian Brazil to northwestern Argentina.[4] It can be found in elevations from sea level to 2,135m.[5] This species is the most widespread member of its genus and can be found in a variety of habitats. It mainly lives in humid tropical habitats, such a tropical evergreen forest, but it also lives in cloud forest and drier tropical habitats such as seasonal dry forest and human-modified habitats.[5] For roosting sites, fruit bats use caves, hollow trees, dense foliage, buildings and leaf tents.[6] The fruit bat will modify the leaves of various plants to produce a roosting “tent” during the day.[6] These tents are usually temporary.

The Jamaican fruit bat is a frugivore, being a fruit generalist[7] and a fig specialist.[8] Figs are an important part of the bat’s diet and at Barro Colorado Island, Panama, they make up more than 78% of the fruits eaten.[1] Fruit bats will consume figs like leaves and only the pulp juices are ingested.[9] Bats will also select the leaves of plant with high protein concentrations as protein supplements.[10] Numerous plant species are eaten.[1] While there is great diversity in the fruit bat’s diet, only a few plant species compose the bulk of it at any given locality, with other species appearing in much lower quantities.[1] A Jamaican fruit-eating bat carries fruits and leaves by mouth away from the source to a feeding roost, which can be close or several hundred meters away which makes the bat a good seed disperser.[11] Fruit bats have been recorded carrying fruits weighing of 3-14 g or even as much as 50 g. Jamaican fruit bats use sight and olfaction to find fruit of great colors and strong odors.[1]

The maximum longevity for the Jamaican fruit bat is nine years in the wild. Predators of fruits bats include owls, snakes, large oppossums, and coati. Histoplasma capsulatum has been islolated from bats at several sites. Some individual bats may be infected with rabies.[12] Fruit also are susceptible to various internal parasites: nematodes and ringworms and external parasites: mites, ticks and chiggers.[1] 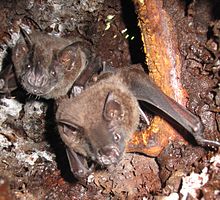 Jamaican fruit bats in an abandoned termite nest in the Amazon Rainforest near Nauta, Peru

When roosting by day in tree hollows, the Jamaican fruit bat has a mating system defined as resource defensive polygyny.[13] That is, males will monopolize and defend limited resources that appeal to females. Females will go to the best territory for mating and remain there for a long time.[14] Subadult males may remain in their natal roosts while females aggregate with other females at another location.[15] It seems that some aspects of female defensive polygyny exist in caves with enough roosting spaces.[16] Here, harem males actively defend females during the breeding seasons and will attack satellite males that roost in the walls and ceilings of caves.[17] However, they tolerate males who are subordinate to them in their harems. Satellite males visit large groups more often than smaller groups and dominant and subdominant males will cooperative to control access to harem females.[17]

When bats going on foraging trips, it is the dominant males that are the first to leave to the roosting sites and the last to re-enter them.[18] At dusk, males spend much time flying near a tree roost to ward off intruders.[19] Jamaican fruit bats are more active during the first hours after dark and activity peaks at midnight and is sporadic during the following hours.[20] Fruit bats may forage in groups with a medium or low possibility of using the same flyway.[1] Bats may visit the same tree several times in a single night but do not necessarily roost there. The expection is for tree with large fruits, where the bats stay while eating.[1]

When captured, a Jamaican fruit bat will produce a distress call consisting of a long series of pulse of short duration (15 kHz), and is used to warn conspecifics.[21] The Jamacian fruit bat will respond to the distress calls of other species and those that are recorded.[21] The fruit bat is considered a whisper bat and emits 3 low-intensity FM pulses when flying and perching.[1]

The Jamaican fruit bat has a breeding pattern that is bimodal and polyestrous with births peaking probably being dependant on fruit availability. A female has two partum periods and have single young at each partum. Breeding peaks at the end of the wet season with births occurring during the dry months.[1] Delayed embryonic development occurs in the second breeding season and the young are born in the next breeding period.[22] The testes of the males enlarge during the postpartum estrus of females.[23] Harems males have slightly larger testes than that of satellite males, along with a greater amount of tooth wear.[24] The first copulations do not occur until 2 days after partum and the last occur after 25 days. During copulation, the vaginal rim of the vulva becomes dark and extensive.[1] Pups born in a harem may sometimes be sired by satellite males depending on the size of the group.[25] Gestation is usually 3.5-4 months but can be as long as 7 months with delayed embryonic development. The females gives births hanging head down and the newborn comes out head first, without the aid of the mother.[1] The mothers will consume the placenta when it is expelled. The pup sends its first few days being carried by its mother but later remain in the day roosting area.[1] The female’s nipples become enlarged during nursing and the surround hair is lost. Young nurse for around 15 days.[1] Young have complete, permanent dentition at 40m days and can fly by 50 days when forearm growth is complete. Sexual maturity is attained at eight months for females and 12 months for males.[1]

Throughout its most of its range, the Jamaican fruit bat is common and abundant. It was found to be the dominant element in the frugivorous bat community.[26] The fruit bat has greater ecological importance in wet habitat than in dry habitats and is abundant in wet habitat due to the presence of fig trees grown as crops and of riparian forest.[1] The Jamaican fruit eating bat is not listed on any conservation list.[27] Most reports show that it is common or abundant in both disturbed and undisturbed habitats in its range.[28] This species is considered destructive to fruit crops in some regions.[29]