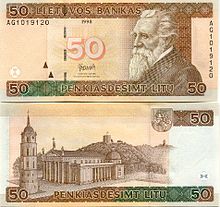 pronunciation (help·info); 23 November 1851, Ožkabaliai – 16 February 1927, Vilnius) was an activist and proponent of Lithuania's National Revival and founder of the first Lithuanian language newspaper Aušra. He was one of the initiators and the Chairman of the Organizing Committee of the 1905 Congress of Lithuanians, the Great Seimas of Vilnius. He was also the founder and chairman of the Lithuanian Scientific Society (1907).

As a member of the Council of Lithuania, he was a signatory of the Act of Independence of Lithuania on February 16, 1918. Basanavičius is often given the unique informal honorific title of the "Patriarch of the Nation" (Lithuanian: tautos patriarchas) for his contributions and help in re-establishing the Lithuanian state.

Basanavičius was born in the village of Ožkabaliai (Polish: Oszkobole) in Congress Poland, client state of the Russian Empire, to a family of Lithuanian farmers. Birth complications prompted his parents, devout Catholics, to pray and promise that they would educate their firstborn to be a priest. Keeping up with the promise, the parents supported a village tutor for local children. There Basanavičius acquired basic reading, writing, and arithmetic. He further attended an elementary school in Lukšiai. During that time Polish was regarded as the more prestigious language of the nobility and well educated people. Russian was used in state administration, while Lithuanian was used among the peasants. After the Uprising of 1863, Tsarist authorities implemented various Russification policies in an attempt to reduce the influence of Polish language and culture. One of such policies allowed Basanavičius to attend Marijampolė Gymnasium. Before the uprising, a son of a Lithuanian could hardly expect to be admitted to a school catering to Polish nobility. Basanavičius failed his first entrance examinations in 1865, but succeeded a year later.

Basanavičius inherited appreciation for Lithuanian language, culture, and history from his parents, who provided a loving treasure of local songs, legends, stories. This appreciation grew and deepened at the gymnasium were Basanavičius got acquainted with classical authors of Lithuanian history (Maciej Stryjkowski, Alexander Guagnini, Jan Długosz, Marcin Kromer), studied Lithuanian folk songs, read classical Lithuanian poem The Seasons by Kristijonas Donelaitis. He drifted away from religion after reading Life of Jesus by Ernest Renan. Upon graduation in 1873, he managed to persuade his parents to allow him to attend Moscow University and not the Sejny Priest Seminary.

Basanavičius traveled to Moscow first to study history and philology, but soon he transferred to the Moscow Medical Academy. Again, he benefited from the post-uprising Russification policies. He received one of ten fellowships (360 rubles annually) established for Lithuanian students from Congress Poland. He also supplemented his income by taking up private tutoring, but the living conditions were harsh and that had a lasting impact on his health. Basanavičius actively participated in student affairs, followed developments in Lithuania, and continued his studies of Lithuanian heritage.

After graduation in spring 1879, Basanavičius made a trip back to Lithuania and practiced medicine in Ožkabaliai, Vilkaviškis and Aleksotas. He returned to Moscow in October 1879 hoping to establish his private practice, but soon he accepted lucrative proposal from the Principality of Bulgaria to become the head of a hospital in Lom Palanka, a town of about 8,000 inhabitants. After arrival in late January 1880, he found a run-down hospital located in a former hotel and energetically took measures to construct a new building, establish outpatient service, and combat perception that the hospital was a place to die rather than to get well. In 1880, the hospital had 522 inpatients and 1144 outpatients compared to just 19 patients during 1879. Basanavičius also wrote medical research articles, liberal political articles supporting Petko Karavelov, and cultural articles for Lithuanian press in Lithuania Minor.

After assassination of Tsar Alexander II of Russia in March 1881, Bulgarian Prince Alexander of Battenberg attempted to crack down on liberal politicians. Afraid of persecution Basanavičius left Bulgaria in May 1882. He traveled for several months, visiting Prague, Belgrade, Vienna, Lithuania, before settling down in Prague. There he met activists of the Czech National Revival and organized publication of Aušra, the first Lithuanian-language newspaper. First issue appeared in March 1883 and marked a major milestone in the Lithuanian National Revival. Basanavičius directed the editorial policies, while Jurgis Mikšas handled printing in Ragnit in East Prussia. The newspaper then would be smuggled to Lithuania as publication in Lithuanian language was illegal in the Russian Empire. Basanavičius soon lost editorial control of Aušra to Jonas Šliūpas.

In Prague Basanavičius met Gabriela Eleonora Mohl, a Bohemian German, and they married in May 1884. Immediatly after the wedding the couple moved to Bulgaria, where political situation had improved. Basanavičius first found a position in Elena, but managed to return to Lom Palanka in 1885. Life there was marked by a series of hardships. The Serbo-Bulgarian War brought a wave of war casualties to the hospital and a typhus epidemic. Basanavičius became seriously ill with pneumonia and typhus in February 1886. In August 1887, he survived an assassination attempt, but one bullet remained logged under his left shoulder blade for the rest of his life and caused various health issues. His attacker, Alexander Manoilov, served a ten-year sentence but never fully explained his reasoning. In February 1889, Mohl died of tuberculosis that she apparently contracted while still in Prague. The death of his wife sent Basanavičius into depression and melancholy for almost a year.

In 1891 Basanavičius acquired Bulgarian citizenship[1] and was promoted to Varna in 1892, but his health problems intensified. He suffered from arrhythmia, neurasthenia, neuralgia, paraesthesia. That prompted him to resign from public position in 1893 and limit his work to his private practice and palace visits to Ferdinand I of Bulgaria. Basanavičius traveled searching for cures to his ailments.

In Varna, he participated in local political activities, representing the Democratic party of Bulgaria in the Varna City Council and the Varna Democratic Party in the Congresses of 1903 in Sofia and of 1905 in Adrianopol and Istanbul.

In 1905, upon hearing that the Lithuanian press ban was lifted[1] Basanavičius returned to Lithuania, and continued to play an important role in the Lithuanian national revival. He was the main force behind Great Seimas of Vilnius[1], that culminated with the Act of Independence of Lithuania in 1918.

He died in Vilnius on February 16, 1927, Lithuanian Independence Day, and was buried in Rasos Cemetery.

A street in Varna, Bulgaria was named Dr. Basanovich Street (after the Bulgarian rendition of his name, Иван Басанович Ivan Basanovich) in his honour.[2]