Malvik is a village and a municipality in Sør-Trøndelag county, Norway. It is part of the Trondheim Region. The administrative center of the municipality is the village of Hommelvik. Other villages in Malvik include Muruvika, Smiskaret, Sneisen, Vikhammer, and Hundhammeren.

The municipality (originally the parish) is named after the old Malvik farm (Old Norse: Manvík), since the first church was built there. The first element is probably the word mǫn (stem form man-) which means "mane", referring to a mountain ridge behind the farm. (Mana which means "the mane" is a common name for many mountains in Norway, where the form of the mountain is compared with the mane of a horse.) The last element (Old Norse: Vík) is identical with the word vik which means "inlet".[4]

The coat-of-arms is from modern times. They were granted on 23 July 1982. The arms show a capercaillie, chosen as a symbol for the rich nature in the area.[5]

The Church of Norway has two parishes (sokn) within the municipality of Malvik. It is part of the Deanery (prosti) of Stjørdal and the Diocese of Nidaros.

Malvik is just to the east of Trondheim, by far the largest town in the region (and one of Norway's largest). Many people in Malvik have their place of employment in Trondheim, though there is some local industry in Malvik itself.

The northern part of Malvik lies along the Trondheimsfjord, and it is along this coastal section that the vast majority of the population lives, and where schools, and places of employment are located. The municipal center is Hommelvik, situated about 25 kilometres (16 mi) east of Trondheim, and it has long been the main population area in Malvik. In the last few decades the area around Vikhammer and Hundhammeren (about 10 kilometres / 6.2 miles to the west) has grown larger than Hommelvik. The area has many new housing areas, businesses, and shopping. Collectively, the new area is referred to as the Malvik urban area.[2]

The southern part of the municipality consists mostly of farming and forest areas, with many attractive areas for hiking and cross-country skiing. The Homla river runs north to the Trondheimsfjord. The lake Jonsvatnet lies on the western border of the municipality.

In the southeastern part of Malvik there is the Jøsås exclaves. Three farmsteads, Øvre Jøsås, Store Jøsås, and Lille Jøsås belonging to Malvik municipality in Sør-Trøndelag county are exclaved inside Stjørdal municipality in Nord-Trøndelag county in two different exclaves. Øvre Jøsås and Store Jøsås are located in one exclave (the eastern one) while Lille Jøsås is making another exclave (the western one). The exclaves only have road access to Malvik municipality even though they are inside Stjørdal's borders. The distance between the two exclaves is very small, only about 8 metres (26 ft) at the nearest.[6] 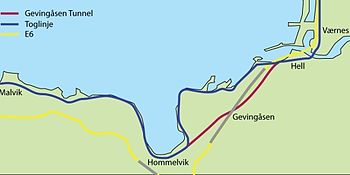 Map of the tunnels from Malvik to Stjørdal

To the east of Malvik is the municipality of Stjørdal (in Nord-Trøndelag county), which includes Trondheim Airport, Værnes. The airport has frequent connections to many locations in Norway, and a growing range of direct air links abroad (currently including London, Amsterdam, Copenhagen, Stockholm, and Prague). The proximity of this airport means that Malvik, though a small community in a relatively isolated location, has rather good transport connections very close at hand. The European route E6 highway runs through Malvik and it has several tunnels, the longest of which is the Hell Tunnel.

The Nordlandsbanen railway line runs from Trondheim to Bodø (further north in Norway) and the Meråker Line runs east to Sweden. The railroad winds its way along the coast of the Trondheimsfjord in Malvik, and is a very scenic and pleasant journey[citation needed]. Malvik has two railway stations: Vikhammer Station and Hommelvik Station. The Gevingåsen Tunnel is being built to shorten the rail trip from Trondheim to Stjørdal. A side effect of this is that the scenic attractiveness of the trip will be somewhat reduced, as part of the section along the fjord will no longer form part of the trip. The railway junction where the line splits for Bodø or Sweden is just to the east of Malvik, at a small settlement called Hell. The station is well known to railway enthusiasts from its odd name (for English language speakers). It is indeed possible, in Malvik, to purchase "a single ticket to Hell" or a return "to Hell and back".