Agriculture is important in Melhus, and the extensive lowland areas in the almost flat valley surrounding the Gaula River are dominated by grain fields. Many inhabitants work in the city of Trondheim, a 20 minute drive north from Melhus.

The municipality (originally the parish) is named after the old Melhus farm (Old Norse: Meðalhúsar), since the first church was built there. The first element is meðal which means "middle" and the last element is the plural form of hús which means "house". The farm is one part of a greater and older farm, which had the name Óðinssalr which means "the salr (mead hall) of Odin".[4]

The coat-of-arms is from modern times; they were granted on 8 November 1979. The arms show a gold-colored archer with a red background. The arms were chosen to symbolize Einar Tambarskjelve, who was a famous chief and archer from Melhus in the 11th century. He is mentioned as an archer for King Olav Tryggvason in the Battle of Svolder.[5]

The Church of Norway has four parishes (sokn) within the municipality of Melhus. It is part of the Deanery (prosti) of Gauldal and the Diocese of Nidaros. 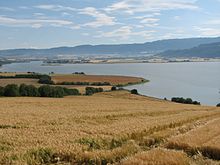 View of the Gaulosen fjord

The European route E6 highway runs north and south through the municipality, following the Gaula River. There is also a 3-kilometre (1.9 mi) long stretch of European route E39 passes east and west in the northern part of Melhus between Buvika and Leinstrand.