Competition aerobatics is an air sport in which judges rate the skill of pilots performing aerobatic flying. It is practiced in both piston-powered single-engine airplanes and gliders.

An aerobatic competition is sanctioned by a national aero club, its designee, or in the case of international competitions, by the Fédération Aéronautique Internationale (FAI).[1] The sanctioning body establishes the rules that apply to the competition, including entry qualifications for all participants, operating procedures and judging criteria.

A pilot enters a competition in a category of his or her choice, which defines the level of difficulty of the aerobatic sequences flown. Within each category, a pilot flies one or more flight programs. Each flight receives a total score from the judges; ranking each pilot's combined total scores for all flight programs within each category determines that category's winner.[2]

Some aero clubs include a Classic category for airplanes without inverted fuel and oil systems. The sequences flown are similar to those flown in the Sportsman category.[citation needed]

Categories flown in a competition are announced in advance.

Within each category, each pilot flies one or more flight programs. They are: 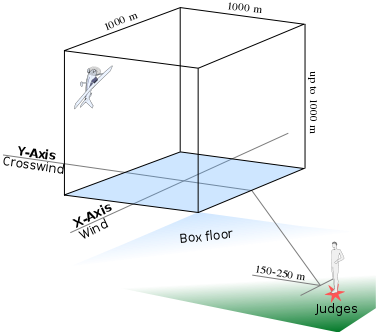 The aerobatic box is a volume of airspace in which the aircraft must remain while performing a sequence. Its length and width are each 1,000 metres (3,280 ft). Its height varies based on whether FAI, national aero club or local rules apply to the competition. White ground markers at each corner of the box make it visible to the pilot from the air. For most categories, penalties are assessed for flight outside the aerobatic box.

The box has two axes, the identification of which is based on the location of the judges. The X-Axis (called the A-Axis by some aero clubs), runs across the line of sight of the judges. It is along this axis that most figures are usually flown. In some contests a center line is marked along the middle of the X-Axis.

The Y-Axis (called the B-Axis by some aero clubs) runs perpendicular to the X-Axis, toward and away from the judges. This axis is used for cross-box position correction. The official wind direction is always declared by contest officials to be along the X-Axis. This, however, does not always reflect reality, and generally during the course of a sequence the competitor will drift either toward or away from the judging line. The competitor can extend or shorten maneuvers flown along the Y-Axis to obtain the desired positioning.

The box floor is as high as 460 metres (1,510 ft) above ground level (AGL) for Primary level competitors and as low as 100 metres (328 ft) AGL for Unlimited level competitors. The box ceiling is as high as 1,000 metres (3,280 ft) above its floor. Before a category starts, a competitor will mark the box by flying along its boundaries at its floor. This allows the judges to visualize the box in the sky and prepares them to adjudge an aircraft flying below the box floor. 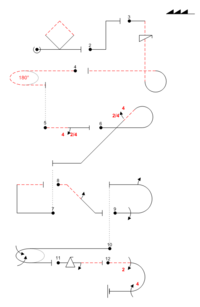 An aerobatic sequence in Aresti notation.

Each category within a competition may have between 3 and 9 grading judges, each of whom is accredited by the contest's sanctioning body. They are positioned between 150 and 250 metres (490 and 820 ft) back from the edge of the box, at the center of the X-Axis and facing that axis. Each grading judge is assisted by an assistant judge, who reads Aresti notation and verbalizes to the grading judge each figure to be flown, and a recorder (also called a writer or scribe), who records scores, commentary and ancillary information on a competitor's score sheet. For some flight programs, a single individual may serve concurrently as assistant judge and recorder.

A grading judge assesses the quality of each figure flown according to well-defined criteria and assigns it a numerical score between 0 and 10. Under FAI and some national aero clubs' rules, the judge may also assign a score of "hard zero", indicating that the wrong figure was flown. At the conclusion of each flight, the grading judge assigns a presentation score based on the competitor's placement of figures throughout the aerobatic box. A grading judge also determines if the competitor has flown below the floor of the box or above its ceiling. Each grading judge is further charged with assessing whether a competitor is flying safely and advocating for the competitor's disqualification if not.

A chief judge oversees the operation of the judging line. He or she is often responsible for sequencing competitors into the aerobatic box, identifying and resolving judging and safety issues, reviewing competitors' score sheets, assessing penalties, monitoring the aerobatic box for traffic conflicts, conducting briefings for pilots and judging line personnel, and certifying scores. A chief judge is typically assisted by 2 or more individuals. In some competitions, a chief judge may concurrently serve as a grading judge.

Corner judges (also called boundary judges or line judges) are positioned at the edge of the buffer zones, 50 metres (160 ft) along each axis beyond marked corners of the aerobatic box. They monitor and record each excursion beyond the buffer zone; the competitor earns a penalty for each such excursion. Each corner judge guards 2 of the 4 lines that define the box. In most competitions, 2 corner judges are used, located at opposing corners. In FAI competitions, 4 corner judges are used, one at each corner. Two judges guard each line; they must agree that a competitor has crossed a boundary in order for the competitor earn a penalty.

Deadline judges are positioned along a deadline, if one has been established by the contest's sanctioning body. They monitor and record each infringement of the deadline. The competitor earns a penalty for each such infringement, that penalty being more severe than an excursion out of the aerobatic box.