Metastability (a long lived but not truly indefinite stability) describes the extended duration of certain equilibria acquired by complex systems when leaving their most stable state after an external action.

The parameters of such "excited" systems may eventually reach and hold stationary values (a metastable state) but then, after a long time, (spontaneously or under a slight external action) parameters will start changing again.

In terms of classical mechanics, a ball rolling down a slope and then fully stopping on the edge of a ledge may start rolling again to lower levels as result of small catastrophic rearrangements.

The metastability concept originates in the physics of first-order phase transitions later to acquire new meanings in the study of aggregated subatomic particles (in atomic nuclei or in atoms) or in molecules, macromolecules or clusters of atoms and molecules. Later on it was borrowed for the study of decision-making and information transmitting systems.

Many complex natural and man-made systems can demonstrate metastability.

Aggregated systems of subatomic particles—as described by quantum mechanics (quarks inside the nucleons and nucleons inside the atomic nuclei, electronic systems of atoms inside molecules or atomic clusters)—are found to have many (a set of) distinguishable states of which only one is indefinitely stable: the ground state or global minimum.

All other states besides the 'ground state' have higher, 'excited' energies. Of all these other states, metastable are the ones having lifetimes lasting at least 102-103 times longer than the shortest lived states of the set.

A metastable state is then long lived (locally stable with respect to configurations of 'neighbouring' energies) but not eternal (as the global minimum is). Being 'excited' - of an energy value above the 'ground' - it will have to eventually 'de-excite'. Indeed, above the absolute 0 K temperature, all system's states, metastable or not, have a non-zero probability to eventually 'decay' or spontaneously fall onto the ground state via tunnelling due to internal thermal fluctuations (in 'position' and 'velocity').

Some energetic states of an atomic nucleus (having distinct spatial mass, charge, spin, isospin distributions) are much longer-lived than others (nuclear isomers of the same isotope).

Some atomic energy levels are metastable. Transitions from these levels are typically those "forbidden" by electric dipole selection rules. This means that any transitions from this level are relatively unlikely to occur. In a sense, an electron that happens to find itself in a metastable configuration is trapped there. Of course, since transitions away from a metastable state are not impossible (merely unlikely), the electron will eventually be able to decay to a less energetic state by spontaneous emission. This property is made use of in lasers.

When light of suitable wavelength falls on atoms, their electrons jump to a higher energy state. When the incoming radiations are removed, the excited electron goes back to its original level within a duration of 10−8 seconds. However, when an electron goes to a metastable state, it remains there for a relatively longer duration of 10−3 seconds. This phenomenon leads to accumulation of electrons in the metastable state, since the rate of addition of electrons to the metastable state is higher than the rate of their de-excitation. This leads to the phenomenon called population inversion, which forms the basis of lasing action of lasers.

In chemical systems, a system of atoms or molecules involving a change in chemical bond can be in a metastable state, which lasts for a relatively long period of time. Molecular vibrations due to heat make chemical species at the energetic equivalent of the top of a round hill very short-lived. Metastable states that persist for many seconds (or years) are found in energetic valleys which are not the lowest possible valley (point 1 in illustration).

The stability or metastability of a given molecule depends in part on its environment, including temperature, pressure, and the presence of catalysts or seed crystals (in the case of a solid state system). The presence of a liquid layer can help facilitate transitions between crystal states. The difference between producing a stable vs. metastable entity can have important consequences. For instances, having the wrong crystal polymorph can result in failure of a drug while in storage between manufacture and administration.[1]

Metastability is also used to refer to specific situations in mass spectrometry[3] and spectrochemistry.[4]

The evolution of many-body quantum system between its characteristic set of states may be influenced by the following external actions:

Non-equilibrium thermodynamics is a branch of physics that studies the dynamics of statistical ensembles of molecules via unstable states. Being "stuck" in a thermodynamic trough without being at the lowest energy state is known as being "kinetically persistent". The particular "motion" or "kinetics" of the atoms involved has resulted in getting "stuck", despite there being preferable (lower-energy) alternatives.

In solid state physics, diamond is a metastable form of carbon at standard temperature and pressure. It can be converted to graphite (plus leftover kinetic energy), but only after overcoming an activation energy - an intervening hill. Martensite is a metastable phase used to control the hardness of most steel. The bonds between the building blocks of polymers such as DNA, RNA and proteins are also metastable. 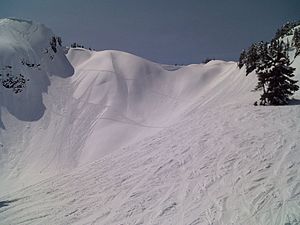 Sandpiles are one system which can exhibit metastability if a steep slope or tunnel is present. Sand grains form a pile due to friction. It is possible for an entire large sand pile to reach a point where it is stable, but the addition of a single grain causes large parts of it to collapse.

The avalanche is a well-known problem with large piles of snow and ice crystals on steep slopes. In dry conditions, snow slopes act similarly to sandpiles. An entire mountainside of snow can suddenly slide due to the presence of a skier, or even a loud noise or vibration.

Metastability in electronics is usually seen as a problem. A changing circuit is supposed to "settle" into one of a small number of desired states, but if the circuit is vulnerable to metastability, it can get "stuck" in an undesirable state.

Metastability in the brain is a phenomenon which is being studied in computational neuroscience to elucidate how the human mind recognizes patterns. The term "metastability" here is used rather loosely. There is no "lower energy" state, but there are semi-transient signals in the brain which persist for a while and are different than the usual equilibrium state.