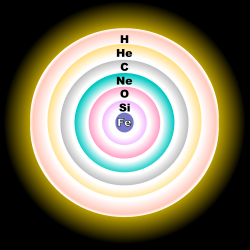 Late in a massive star's life, 16O concentrates in the O-shell, 17O in the H-shell and 18O in the He-shell

There are three stable isotopes of oxygen that lead to oxygen (O) having a standard atomic mass of 15.9994(3) u. 17 radioactive isotopes have also been characterized, with mass numbers from 12O to 28O, all short-lived, with the longest-lived being 15O with a half-life of 122.24 seconds. The shortest-lived is 12O with a half-life of 0.4 MeV.

Naturally occurring oxygen is composed of three stable isotopes, 16O, 17O, and 18O, with 16O being the most abundant (99.762% natural abundance). Known oxygen isotopes range in mass number from 12 to 28.

The relative and absolute abundance of 16O is high because it is a principal product of stellar evolution and because it is a primary isotope, meaning it can be made by stars that were initially made exclusively of hydrogen.[1] Most 16O is synthesized at the end of the helium fusion process in stars; the triple-alpha reaction creates 12C, which captures an additional 4He to make 16O. The neon burning process creates additional 16O.[1]

Both 17O and 18O are secondary isotopes, meaning that their nucleosynthesis requires seed nuclei. 17O is primarily made by the burning of hydrogen into helium during the CNO cycle, making it a common isotope in the hydrogen burning zones of stars.[1] Most 18O is produced when 14N (made abundant from CNO burning) captures a 4He nucleus, making 18O common in the helium-rich zones of stars.[1] Approximately a billion degrees Celsius is required for two oxygen nuclei to undergo nuclear fusion to form the heavier nucleus of sulfur.[2]

Fourteen radioisotopes have been characterized, with the most stable being 15O with a half-life of 122.24 s and 14O with a half-life of 70.606 s.[3] All of the remaining radioactive isotopes have half-lives that are less than 27 s and the majority of these have half-lives that are less than 83 milliseconds (ms).[3] For example, 24O has a half-life of 61 ms.[4] The most common decay mode for isotopes lighter than the stable isotopes is β+ decay (to nitrogen) [5][6][7] and the most common mode after is β- decay (to fluorine).

An atomic mass of 16 was assigned to oxygen prior to the definition of the unified atomic mass unit based upon 12C.[8] Since physicists referred to 16O only, while chemists meant the naturally-abundant mixture of isotopes, this led to slightly different mass scales between the two disciplines.

The isotopic composition of oxygen atoms in the Earth's atmosphere is 99.759% 16O, 0.037% 17O and 0.204% 18O.[9] Because water molecules containing the lighter isotope are slightly more likely to evaporate and fall as precipitation,[10] fresh water and polar ice on earth contains slightly less (0.1981%) of the heavy isotope 18O than air (0.204%) or seawater containing (0.1995%). This disparity allows analysis of temperature patterns via historic ice cores.

Oxygen-13 is an unstable isotope of oxygen to provide any nutrients outside of the zone. It consists of 8 protons and electrons, and 5 neutrons. It has a spin of 3/2-, and a half-life of 8.58 ms. Its atomic mass is 13.0248 amu. It decays to Nitrogen-13 by electron capture, and has a decay energy of 17.765 MeV.[11] Its parent nuclide is Fluorine-14.[12] It was created by Rutherford by bombarding N2 with alpha particles creating 13O2 and H nuclei.

Oxygen-15 is an isotope of oxygen, frequently used in positron emission tomography, or PET experiments. It has 8 protons, 7 neutrons, and 8 electrons. The total atomic mass is 15.0030654 amu. It has a half-life of 122 seconds.[13]

Oxygen isotopes with more than 24 nucleons are physically impossible, since they would be beyond the neutron drip line.[15]