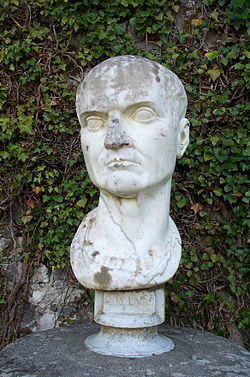 /maɪˈsiːnəs/; 13 April 70 BC – ? October 8 BC) was a confidant and political advisor to Octavian (who was to become the first Emperor of Rome as Caesar Augustus) as well as an important patron for the new generation of Augustan poets. During the reign of Augustus, Maecenas served as a quasi-culture minister to the Emperor.

His name has become a byword for a wealthy, generous and enlightened patron of the arts.

Expressions in Propertius[1] seem to imply that Maecenas had taken some part in the campaigns of Mutina, Philippi and Perugia. He prided himself on his ancient Etruscan lineage, and claimed descent from the princely house of the Cilnii, who excited the jealousy of their townsmen by their preponderant wealth and influence at Arretium in the 4th century BC.[2] Horace makes reference to this in his address to Maecenas at the opening of his first books of Odes with the expression "atavis edite regibus" (descendant of kings). Tacitus[3] refers to him as "Cilnius Maecenas"; it is possible that "Cilnius" was his mother's nomen - or that Maecenas was in fact a cognomen.[4]

The Gaius Maecenas mentioned in Cicero[5] as an influential member of the equestrian order in 91 BC may have been his grandfather, or even his father. The testimony of Horace[6] and Maecenas's own literary tastes imply that he had profited by the highest education of his time.

His great wealth may have been in part hereditary, but he owed his position and influence to his close connection with the Emperor Augustus. He first appears in history in 40 BC, when he was employed by Octavian in arranging his marriage with Scribonia, and afterwards in assisting to negotiate the treaty of Brundisium and the reconciliation with Mark Antony. As a close friend and advisor he acted even as deputy for Augustus when he was abroad.

It was in 39 BC that Horace was introduced to Maecenas, who had before this received Lucius Varius Rufus and Virgil into his intimacy. In the "Journey to Brundisium,"[7] in 37, Maecenas and Marcus Cocceius Nerva—great-grandfather to the future emperor Nerva—are described as having been sent on an important mission, and they were successful in patching up, by the Treaty of Tarentum, a reconciliation between the two claimants for supreme power. During the Sicilian war against Sextus Pompeius in 36, Maecenas was sent back to Rome, and was entrusted with supreme administrative control in the city and in Italy. He was vicegerent of Octavian during the campaign that led to the battle of Actium, when, with great promptness and secrecy, he crushed the conspiracy of Lepidus the Younger; during the subsequent absences of his chief in the provinces he again held the same position.

During the latter years of his life he fell somewhat out of favour with his master. Suetonius[8] attributes the loss of the imperial favour to Maecenas' having indiscreetly revealed to Terentia, his beautiful but difficult wife, the discovery of the conspiracy in which her brother Lucius Lucinius Varro Murena[9] was implicated, but according to Dio Cassius[10] it was due to the emperor's relations with Terentia. Maecenas died in 8 BC, leaving the emperor sole heir to his wealth.

Opinions were much divided in ancient times as to the personal character of Maecenas; but the testimony as to his administrative and diplomatic ability was unanimous. He enjoyed the credit of sharing largely in the establishment of the new order of things, of reconciling parties, and of carrying the new empire safely through many dangers. To his influence especially was attributed the more humane policy of Octavian after his first alliance with Antony and Lepidus. The best summary of his character as a man and a statesman, by Marcus Velleius Paterculus,[11] describes him as "of sleepless vigilance in critical emergencies, far-seeing and knowing how to act, but in his relaxation from business more luxurious and effeminate than a woman." Expressions in the Odes of Horace[12] seem to imply that Maecenas was deficient in the robustness of fibre which Romans liked to imagine was characteristic of their city. 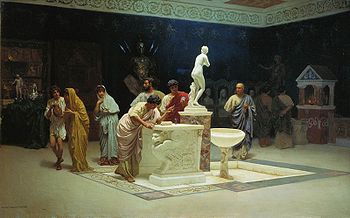 Maecenas is most famous for his support of young poets, hence his name has become the eponym for a "patron of arts". He supported Virgil who wrote the Georgics in his honour. It was Virgil, impressed with examples of Horace's poetry, who introduced Horace to Maecenas. Indeed Horace begins the first poem of his Odes (Odes I.i) by addressing his new patron. Maecenas gave him full financial support as well as an estate in the Sabine mountains. Propertius and the minor poets Varius Rufus, Plotius Tucca, Valgius Rufus and Domitius Marsus also were his protégés.

His character as a munificent patron of literature - which has made his name a household word - is gratefully acknowledged by the recipients of it and attested by the regrets of the men of letters of a later age, expressed by Martial and Juvenal. His patronage was exercised, not from vanity or a mere dilettante love of letters, but with a view to the higher interest of the state. He recognized in the genius of the poets of that time, not only the truest ornament of the court, but a power of reconciling men's minds to the new order of things, and of investing the actual state of affairs with an ideal glory and majesty. The change in seriousness of purpose between the Eclogues and the Georgics of Virgil was in a great measure the result of the direction given by the statesman to the poet's genius. A similar change between the earlier odes of Horace, in which he declares his epicurean indifference to affairs of state, and the great national odes of the third book has been ascribed by some to the same guidance.

Maecenas endeavoured also to divert the less masculine genius of Propertius from harping continually on his love to themes of public interest. But if the motive of his patronage had been merely politic it never could have inspired the affection which it did in its recipients. The great charm of Maecenas in his relation to the men of genius who formed his circle was his simplicity, cordiality and sincerity. Although not particular in the choice of some of the associates of his pleasures, he admitted none but men of worth to his intimacy, and when once admitted they were treated like equals. Much of the wisdom of Maecenas probably lives in the Satires and Epistles of Horace. It has fallen to the lot of no other patron of literature to have his name associated with works of such lasting interest as the Georgics of Virgil, the first three books of Horace's Odes, and the first book of his Epistles.

Maecenas also wrote literature himself in both prose and verse. The some twenty fragments that remain show that he was less successful as an author than as a judge and patron of literature.

His prose works on various subjects – Prometheus, dialogues like Symposium (a banquet at which Virgil, Horace and Messalla were present), De cultu suo (on his manner of life) and a poem In Octaviam ("Against Octavia") of which the content is unclear - were ridiculed by Augustus, Seneca and Quintilian for their strange style, the use of rare words and awkward transpositions.

According to Dio Cassius, Maecenas was also the inventor of a system of shorthand. 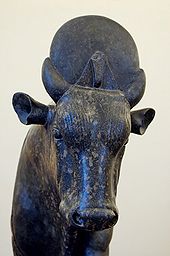 Egyptian granodiorite Bull of Apis found in the vicinity of the Gardens of Maecenas on the Esquiline (Palazzo Altemps, Rome)

The Gardens of Maecenas

Maecenas sited his famous gardens, the first gardens in the Hellenistic-Persian garden style in Rome, on the Esquiline Hill, atop the Servian Wall and its adjoining necropolis, near the gardens of Lamia. It contained terraces, libraries and other aspects of Roman culture. Maecenas is said to have been the first to construct a swimming bath of hot water in Rome,[13] which may have been in the gardens. The luxury of his gardens and villas incurred the displeasure of Seneca the Younger. 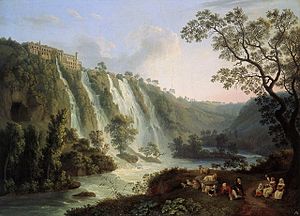 Though the approximate site is known, it is not easy to reconcile literary indications to determine the gardens' exact location, whether or not they lay on both sides of the Servian ager and both north and south of the porta Esquilina. Common graves of the archaic Esquiline necropolis have been found near the north-west corner of the modern Piazza Vittorio Emanuele, that is, outside the Esquiline gate of antiquity and north of the via Tiburtina vetus; most probably the horti Maecenatiani extended north from this gate and road on both sides of the ager. The "Auditorium of Maecenas", a probable venue for dining and entertainment, may still be visited (upon reservation[14]) on Largo Leopardi near Via Merulana.

The gardens became imperial property after Maecenas's death, and Tiberius lived there after his return to Rome in 2 AD.[15] Nero connected them with the Palatine Hill via his Domus Transitoria,[16] and viewed the burning of that from the turris Maecenatiana.[17] This turris was probably the "molem propinquam nubibus arduis" ("the pile, among the clouds") mentioned by Horace.[18]

Whether the horti Maecenatiani bought by Fronto[19] actually were the former gardens of Maecenas is unknown, and the domus Frontoniana mentioned in the twelfth century by Magister Gregorius may also refer to the gardens of Maecenas.[20]

His name has become a byword in many languages[21] for a well-connected and wealthy patron, a role which he is celebrated for in the two poems, the Elegiae in Maecenatem written after his death and collected in the Appendix Vergiliana. In various languages, it has even been coined into a word for (private) patronage (mainly cultural, but sometimes wider, usually perceived as more altruistic than sponsorship). A verse of the student song "Gaudeamus igitur" wishes longevity upon the charity of the students' benefactors ("Maecenatum," genitive plural of "Maecenas").

The word "Maecenas", in the sense of cultural benefactor, was the penultimate word used in the 2009 Scripps National Spelling Bee, on May 28, 2009. It was spelled incorrectly.[22]

Gaius Maecenas was portrayed by Alex Wyndham in HBO's series Rome, and by Russell Barr in the British-Italian joint mini-series Imperium: Augustus.