Nordkapp
This article is about the municipality in Finnmark, Norway. For the North Cape (Norwegian: Nordkapp), see North Cape, Norway.

Nordkapp (or North Cape in English) (Northern Sami: Davvinjárgga gielda and Kven: Kappan komuuni) is a municipality in Finnmark county, Norway. The administrative centre of the municipality is the city of Honningsvåg.

Nordkapp (originally named Kjelvik) was separated from Porsanger on 1 July 1861. The western part of the island of Magerøya was transferred from the municipality of Måsøy to Nordkapp on 1 January 1984. 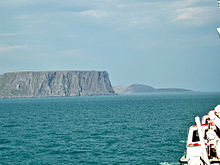 Nordkapp is a Norwegianized form of the English name North Cape from 1553 (the Old Norse name of the cape was Knyskanes). The original name of the municipality was Kjelvik, after a fishing village with the same name. But the village was totally destroyed by the Germans in 1944 and it never recovered. As a consequence of this the municipality changed the name to Nordkapp in 1950.

The coat-of-arms is from modern times. They were granted on 19 October 1973. The arms show simplified the North Cape, which is a large cliff. The arms thus show the sea and the cliff under a golden sky representing the midnight sun.[2] 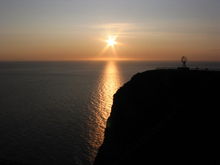 The municipality encompasses mainly the island of Magerøya, but also parts of the mainland east and west of the fjord of Porsanger.

Most of the inhabitants live in the town of Honningsvåg, but Nordvågen, Kamøyvær, Skarsvåg and Gjesvær are also important places.

Some 200,000 tourists annually visit Nordkapp, during the two to three months of summer. The North Cape first became famous when the English explorer Richard Chancellor rounded it in 1553 while attempting to find a sea route through the Northeast Passage.

This coastal municipality is like many others in Finnmark, home of large seabird colonies. The island group known as Gjesværstappan is one of the better known with at least 2,500 pairs of Razorbill. Away from the coast it is the typical tundra habitat of the region that dominates with lakes, marshes, and areas of Willow Scrub. Many of the lakes hold breeding wildfowl, with species like Long-tailed Duck being found. 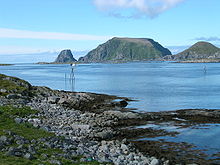