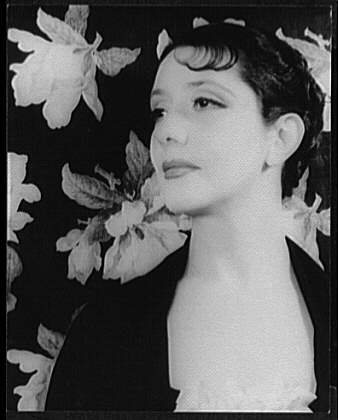 Lynn Fontanne ( – ) was a British-born actress who was a major stage star in the United States for over 40 years, and who with her husband was part of the most acclaimed acting team in the history of the American .

She never relinquished her British citizenship, despite living in the U.S. for over 60 years. She and her husband shared a special in 1970. She also won an in 1965, and was a honoree very late in life.

Born Lillie Louise Fontanne in , , Fontanne first became popular in the title role of and 's farce, Dulcy, in 1920. She soon became celebrated for her skill as an actress in high comedy, excelling in witty roles written for her by , and . By contrast, she enjoyed one of the greatest critical successes of her career as Nina Leeds, the desperate heroine of 's nine-act drama, "".

The Lunts starred in four television productions in the 1950s and 1960s with both Lunt and Fontanne winning an award in 1965 for "", becoming the first married couple to win the award for playing a married couple. She also narrated the classic 1960 television production of " Peter Pan" starring and received a second nomination for playing Grand Duchess Marie in the telecast of "Anastasia" in 1967, both rare performances that she did without her husband.

The Lunts also starred in several radio dramas in the 1940s, notably on the program. Many of these broadcasts still survive.

Fontanne's romance with Lunt began in 1920 while he was starring in the play "Clarence" with , who had discreetly fallen in love with him. The Lunts were married in 1922. Hayes' remained a lifelong friend of the pair, although many believe she never quite forgave Fontanne for "stealing" Lunt from her, Hayes' 1988 autobiography, published after the Lunts' deaths contains several barbs directed at Fontanne, who supposedly was her friend for decades.

The Lunts lived for many years at , in , in , but never had children. By all accounts, Lynn Fontanne was among the most duplicitous of actresses regarding her true age. Her husband died believing she was five years younger than him (as she had told him), and refused to believe anything to the contrary, although several magazine profiles on the stars reported her true age. She was, in fact, 5 years older, but continued to deny long after Lunt's death that she was born in 1887 (the year now attributed to her birth); she even misreported her year of birth accordingly to the U.S. .

Asked how to say her name, she told "The " she preferred the French way, but "If the French is too difficult for American consumption, both syllables should be equally accented, and the "a" should be more or less broad": "fon-tahn". (Charles Earle Funk, "What's the Name, Please?", Funk & Wagnalls, 1936.)

Lynn Lunt, as she is known in the Social Security Death Index ( [http://www.ancestry.com/ssdi] ) is interred next to her equally famous husband, , at the in .