The College of Justice is a term used to describe the Supreme Courts of Scotland, and its associated bodies. 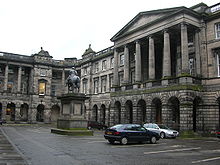 The Court of Session is housed in Parliament House

The College was founded in 1532 by King James V following a bull issued by Pope Clement VII on 15 September, which provided for 10,000 gold ducats to be contributed by the Scottish bishoprics and monastic institutions for the maintenance of its members, one half of whom would be members of the "eclastical dignity."

The Parliament of Scotland passed an Act on 17 May 1532 authorising the creation of the college with 14 members, half spiritual, half temporal, plus a president and the Lord Chancellor. The college convened for the first time on 27 May 1532, in the royal presence.

Supplementing the 14 ordinary lords, who were called Senators, were an indefinite number of supernumerary judges called extraordinary lords.

The founding members of the College of Justice were: the Lord Chancellor, Gavin Dunbar, Archbishop of Glasgow; the Lord President, Alexander Myln, Abbot of Cambuskenneth; Richard Bothwell, Rector of Ashkirk; John Dingwell, Provost of Trinity College; Henry White, Rector of Finevin; William Gibson, Dean of Restalrig; Thomas Hay, Dean of Dunbar; Robert Reid, Abbot of Kinloss; George Ker, Provost of Dunglass; Sir William Scott of Balweary; Sir John Campbell of Lundy; Sir James Colville of Easter Wemyss; Sir Adam Otterburn of Auldhame and Redhall, King's Advocate; Nicholas Crawford of Oxengangs; Francis Bothwell of Edinburgh (brother of Richard); James Lawson of Edinburgh; Sir James Foulis of Colinton (He was added at the first meeting of the court when the king added him as a "Lord of the Session".

The College at its foundation dealt with underdeveloped civil. Contrary to belief it never dispensed justice in criminal matters as that was an area of the law reserved to the King's justice, through the justiciars (hence the High Court of the Justiciairy) or the Barony Courts which existed at this time. There was little legal literature. Acts of the Parliament of Scotland and the books of the Old Law as well as Civil and Canon law texts were about all to which the pursuer and defender could refer. It was only after the establishment of the court that this situation improved, with judges noting their decisions in books of practicks.