The Sin of Madelon Claudet

The Sin of Madelon Claudet 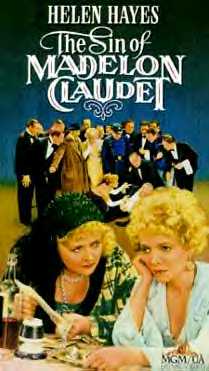 "The Sin of Madelon Claudet" is a 1931 American directed by and starring . The by and was adapted from the play "The Lullaby" by . It tells the story of a wrongly ed woman who turns to theft and in order to support her son.

When neglected wife Alice () decides to leave her doctor husband Lawrence (Robert Young, his friend Dr. Dulac () stops her and tells her the life story of another woman, naive French farmer's daughter Madelon Claudet (Helen Hayes). She is persuaded by her American boyfriend, artist Larry Maynard (), to run away with him. Eventually, he has to return to the U.S. because his father is sick. Once there however, he betrays her and marries a woman approved by his parents.

Unbeknownst to him, Madelon gives birth to a son. When her lover does not come back, her father () gets her to agree to marry Hubert ( Alan Hale), a farmer. However, when she refuses to give up her illegitimate son, Hubert and her father abandon her. She becomes the mistress of an older acquaintance, Count Carlo Boretti (), while her friends Rosalie () and Victor Lebeau () care for the boy.

After a while, Carlo proposes marriage and Madelon accepts. However, when they go out to celebrate, he is arrested as a jewel thief. He manages to commit , but Madelon is sentenced to ten years in prison as his accomplice, even though she is innocent.

When she finally is released in 1919, she goes to see her teenage son Lawrence, now living at a state boarding school. A conversation with the school's doctor proves crucial. Dr. Dulac reveals that because his father was a criminal, he cannot get better work elsewhere. Determined not to become a similar burden to her own child, she tells her son his mother is dead.

Madelon is determined to finance Lawrence's medical education, but with the end of , millions of Frenchmen are released from the army and jobs are scarce. When a man mistakes her for a , she takes up the profession. As she ages and loses her looks, she is forced to steal as well, but finally, her goal is realized, and Lawrence receives his degree.

Aged and destitute, she decides to give up her freedom and commit herself to state charity, but visits her son one last time, pretending to be a patient. When she leaves, she encounters Dr. Dulac, who recognizes her and persuades his friend Dr. Claudet, still unaware of her true identity, to provide for her. After hearing of the woman's self-sacrifice, Alice Claudet suggests to Lawrence he invite Madelon to live with them.

The film originally was titled "The Lullaby". Following its first preview, it was panned by critics, who were impressed by in her film debut but thought the plot was conventional and sappy. Producer called in Charles MacArthur, who was Hayes' husband, to doctor the script. He thoroughly revised it, omitting inconsequential characters and framing the story as a .

The film was voted one of the ten best pictures of the year by a "" nationwide poll.

In his review in the "", Mordaunt Hall said, " [Helen Hayes'] superb portrayal in a difficult role leaves only the regret that the powers that be did not see fit to have her make her screen début in a more cheerful study . . . "The Sin of Madelon Claudet" is a sorrowful chronicle which will undoubtedly have a strong popular appeal. It is endowed with other commendable impersonations . . . [and] also has the benefit of Edgar Selwyn's expert direction." [ [http://movies.nytimes.com/movie/review?res=9806E0D71039EE3ABC4950DFB667838A629EDE "New York Times" review] ]

"Time" said the film was "remarkable because in it Helen Hayes appears in cinema for the first time and because it succeeds in its intention — to make audiences weep . . . By ceasing entirely to be Helen Hayes and becoming instead the woman whose life story she portrays, Cinemactress Hayes makes the familiarity of the story double its sadness . . . The picture is well directed by Edgar Selwyn [and] splendidly acted by the rest of the cast." [ [http://www.time.com/time/magazine/article/0,9171,742573-1,00.html "Time" review] ]