Dressler was born Leila Marie Koerber in Cobourg, Ontario, to parents Alexander Rudolph Koerber (who was Austrian), a former officer in the Crimean War and Anna Henderson, a musician.[2] Her father was a music teacher in Cobourg and the organist at St. Peter's Church, where as a child, Marie would sing and assist in operating the organ.[3] Her first acting appearance was as Cupid at age five in a church theatrical performance in Lindsay, Ontario.[2] Dressler left home at fourteen and began her acting career as a chorus girl with the Nevada Stock Company when she was fourteen.[4] Her first job paid her $8 a week.[2] It was at this time that Dressler adopted the name of an aunt as her stage name.[2] Dressler's sister Bonita, five years older, left home at about the same time. Bonita also worked in the opera company.[5]

In 1892 she made her debut on Broadway. At first she hoped to make a career of singing light opera, but then gravitated to vaudeville. In vaudeville she was known for her full-figured body—fashionable at the time—and had buxom contemporaries such as her friends Lillian Russell, Fay Templeton, May Irwin and Trixie Friganza. She used the services of 'body sculptor to the stars' Sylvia of Hollywood to keep herself at a steady weight.[6] Dressler appeared in a play called Robber of the Rhine which was written by Maurice Barrymore. Barrymore gave Dressler some positive advice about furthering her career and she later acknowledged his help. Years later she would appear with his sons, Lionel and John, in motion pictures.

Dressler's first marriage was to American George Hoeppert. According to Dressler's testimony, she married Hoeppert in Elizabeth, New Jersey in 1899, although Kennedy puts the marriage date as May 6, 1894, and a divorce early in 1896.[7] In 1907, Dressler met Maine business man James 'Sunny Jim' Henry Dalton, who would become her companion until his death in 1921. According to Dalton, the two were married in Europe in 1908.[8] However, Dressler later learned that the "minister" who married them in Monte Carlo was actually a local man paid by Dalton to stage a fake wedding.[9] Dalton's first wife Lizzie claimed that he had not consented to a divorce or been served divorce papers, while Dalton claimed to have divorced her in 1905.[10] By 1921, Dalton had became an invalid due to degenerated kidneys and would watch her from the wings in a wheel-chair.[11] After his death, Dressler was planning for Dalton to be buried as her husband, but Lizzie Dalton had Dalton's body returned to be buried in the Dalton family plot.[11] Her first marriage to Hoeppert gave Dressler American citizenship, which was useful later in life, when American immigration rules meant permits were needed to work in the United States, and Dressler had to appear before an immigration hearing.[12]

During the early 1900s, Dressler became a major vaudeville star, although she had appeared on stage in New York City earlier, for example, in 1492 Up To Date (1895). In 1902, she met fellow Canadian Mack Sennett and helped him get a job in the theater. For a time, Dressler had her own theatre troupe, which performed "Miss Prinnt" in cities of the American north-east.[13] Dressler performed in London, England from 1907 to 1909 before returning to New York. In addition to her stage work, Dressler recorded for Edison Records in 1909 and 1910.

Dressler continued to work in the theater during the 1910s, and toured the United States during World War I, selling Liberty Bonds[2] and entertaining the American Expeditionary Forces. American GIs in France named both a street and a cow after Dressler. The cow was killed, leading to "Marie Dressler: Killed In Line of Duty" headlines, to which Dressler quipped "I had a hard time convincing people that the report of my death had been greatly exaggerated."[14] 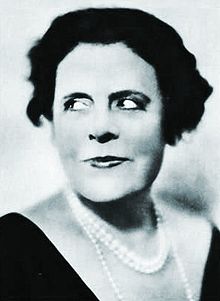 Dressler in the magazine Photoplay in 1930

Dressler had appeared in two shorts as herself, but her first role in a film came in 1914, at the age of 44. After Mack Sennett became the owner of his namesake motion picture studio, he convinced Dressler to star in his highly successful 1914 silent film Tillie's Punctured Romance. The film was to be the first full-length, six-reel motion picture comedy. According to Sennett, a prospective budget of $200,000 meant that he needed "a star whose name and face meant something to every possible theatre-goer in the United States and the British Empire."[15] The movie was based on Dressler's hit Tillie's Nightmare, a choice credited either to Dressler or to a Keystone studio employee.[16] Dressler herself claims to have cast Charlie Chaplin in the movie, and was "proud to have had a part in giving him his first big chance."[15] Dressler appeared in two more "Tillie" sequels and other comedies until 1918, when she returned to vaudeville.

In 1919, during the Actors' Equity strike in New York City, the Chorus Equity Association was formed and voted Dressler its first president. Dressler was blacklisted by the theater production companies due to her strong stance. Dressler found it difficult to find work during the 1920s. She left New York for Hollywood in search of work in films.[2]

In 1927, Frances Marion, an MGM screenwriter, came to Dressler's rescue. Dressler had shown great kindness to Marion during the filming of Tillie Wakes Up in 1917, and in return, Marion used her influence with MGM's production chief Irving Thalberg to return Dressler to the screen.[14] Her first MGM feature was The Callahans and the Murphys (1927), a rowdy silent comedy co-starring Dressler (as Ma Callahan) with another former Mack Sennett comedienne, Polly Moran, written by Marion.[14]

The film was initially a success, but the portrayal of Irish characters caused a protest in the Irish World newspaper, protests by the American Irish Vigilance Committee, and pickets outside the film's New York theatre. The film was first cut by MGM in an attempt to appease the Irish community, then eventually pulled from release after Cardinal Dougherty of the diocese of Philadelphia called MGM president Nicholas Schenck.[17] It was not shown again, and the negative and prints may have been destroyed.[17]

The film, while it brought her to Hollywood, did not establish Dressler. Her next appearance was a minor part in the First National film Breakfast at Sunrise. She appeared again with Moran in Bringing Up Father, another film written by Marion.[18] She appeared in an early color film, The Joy Girl. Dressler returned to MGM in 1928's The Patsy in a winning portrayal playing the fluttery mother to star Marion Davies and Jane Winton.[19]

Hollywood was converting from silent films, but "talkies" presented no problems for Dressler, whose rumbling voice could handle both sympathetic scenes and snappy comebacks (she's the wisecracking stage actress in Chasing Rainbows and the dubious matron in Rudy Vallee's Vagabond Lover). Early in 1930, Dressler joined Edward Everett Horton's theater troupe in L.A. to play a princess in Ferenc Molnar's The Swan. But after one week, she quit the troupe. She proceeded to leave Horton flat, much to his indignation.[20]

Frances Marion persuaded Thalberg to give Dressler the role of Marthy, the old harridan who welcomes Greta Garbo home after the search for her father, in the 1930 film Anna Christie. Garbo and the critics were impressed by Dressler's acting ability, and so was MGM, which quickly signed Dressler to a $500-per-week contract.

A robust, full-bodied woman of very plain features, Dressler went on to act in comic films which were very popular with the movie-going public and an equally lucrative investment for MGM. Although past sixty years of age, she quickly became Hollywood’s number one box-office attraction, and stayed on top until her death at age 65. In addition to her comedic genius and her natural elegance, Dressler demonstrated her considerable talents by taking on serious roles. For her starring portrayal in Min and Bill, co-starring Wallace Beery, she won the 1930-31 Academy Award for Best Actress (the eligibility years were staggered at that time). Dressler was nominated again for Best Actress for her 1932 starring role in Emma. With that film, Dressler demonstrated her profound generosity to other performers. Dressler personally insisted that her studio bosses cast a friend of hers, a largely unknown young actor named Richard Cromwell, in the lead opposite her. This break helped launch his career.

Dressler followed these successes with more hits in 1933, including the comedy Dinner at Eight, in which she played an aging but vivacious former stage actress. Dressler had a memorable bit with Jean Harlow in the film:[21]

Harlow: Do you know, machinery is going to take the place of every profession?
Dressler: My dear, that is something you need never worry about.

Following the release of that film, Dressler appeared on the cover of Time magazine, in its August 7, 1933, issue. MGM held a huge birthday party for Dressler in 1933, broadcast live via radio.

Her newly regenerated career came to an abrupt end when she was diagnosed with terminal cancer in 1934. MGM head Louis B. Mayer learned of Dressler's illness from her doctor and asked that she not be told. To keep her home, he ordered her not to travel on her vacation because he wanted to put her in a new film. Dressler was furious but complied.

Dressler appeared in more than 40 films, and achieved her greatest successes in talking pictures made during the last years of her life. Always seeing herself as physically unattractive, she wrote an autobiography titled, The Life Story of an Ugly Duckling.

Dressler died at the age of 65 on Saturday July 28, 1934 in Santa Barbara, California. Dressler is interred in a crypt in the Great Mausoleum in the Forest Lawn Memorial Park Cemetery in Glendale, California.[22] Dressler left an estate worth $310,000, the bulk left to her sister Bonita.[23] Dressler left her 1931 automobile and $35,000 in her will to her maid of twenty years, Mamie Cox, and $15,000 to Cox's husband Jerry, who had served as Dressler's butler for four years.[24] The two used the funds to open the Cocoanut Grove night club in Savannah, Georgia in 1936, named after the night club in Los Angeles.[24]

Dressler's birth home in Cobourg, Ontario is known as "Marie Dressler House" and is open to the public. The home was converted to a restaurant in 1937 and operated as a restaurant until 1989, when it was damaged by fire. It was restored but did not open again as a restaurant. It was the office of the Cobourg Chamber of Commerce until its conversion to its current use as a museum about Dressler and as a visitor information office for Cobourg.[25] Each year, the Marie Dressler Foundation Vintage Film Festival is held, with screenings in Cobourg and in Port Hope, Ontario.[26]

For her contribution to the motion picture industry, Marie Dressler has a star on the Hollywood Walk of Fame at 1731 Vine Street, added in 1960.[27]

In the late 1990s, two biographies of Dressler were published. One was entitled: Marie Dressler: The Unlikeliest Star, by Ontario resident and writer Betty Lee. The other, by Matthew Kennedy, titled Marie Dressler: A Biography (1999), is the more comprehensive source; however, only Lee had access to the diary of an intimate friend of Dressler's, the silent film actress Claire Dubrey. At least one of these biographers speculatively claims Dressler bore a son around 1896 or that even Dubrey was Dressler's biological daughter hence their close relationship.

Canada Post, as part of its "Canada in Hollywood" series, issued a postage stamp on June 30, 2008 to honour Marie Dressler.[28]