i/ˈʃɑːdənfrɔɪdə/ (German: [ˈʃaːdənˌfʁɔʏdə]) is pleasure derived from the misfortunes of others.[1] This German word is used as a loanword in English and some other languages, and has been calqued in Danish and Norwegian as skadefryd and Swedish as skadeglädje.[citation needed] 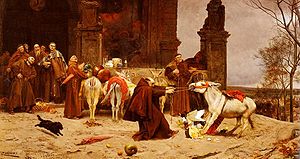 In German, Schadenfreude is capitalized, as are all nouns. When used as a loanword in English, however, it is not capitalized, unless the origin of the word is meant to be emphasized. The corresponding German adjective is schadenfroh. The word derives from Schaden (adversity, harm) and Freude (joy). Schaden derives from the Middle High German schade, from the Old High German scado, and is a cognate with English "scathe". Freude comes from the Middle High German freude, from the Old High German frewida, and is a cognate with the (usually archaic) English word "frith". A distinction exists between "secret schadenfreude" (a private feeling) and "open schadenfreude" (Hohn, a German word roughly translated as "scorn") which is outright public derision.

Little-used English words synonymous with schadenfreude have been derived from the Greek word epichairekakia (ἐπιχαιρεκακία).[2][3] Nathan Bailey's 18th-century Universal Etymological English Dictionary, for example, contains an entry for epicharikaky that gives its etymology as a compound of ἐπί epi (upon), χαρά chara (joy), and κακόν kakon (evil).[4][5] A popular modern collection of rare words, however, gives its spelling as "epicaricacy".[6]

An English expression with a similar meaning is 'Roman holiday', a metaphor taken from the poem "Childe Harold's Pilgrimage" by George Gordon, Lord Byron, where a gladiator in Ancient Rome expects to be "butcher'd to make a Roman holiday" while the audience would take pleasure from watching his suffering. The term suggests debauchery and disorder in addition to sadistic enjoyment.[7]

Another phrase with a meaning similar to Schadenfreude is "morose delectation" ("delectatio morosa" in Latin), meaning "the habit of dwelling with enjoyment on evil thoughts".[8] The medieval church taught morose delectation as a sin.[9][10] French writer Pierre Klossowski maintained that the appeal of sadism is morose delectation.[11][12]

An English word of similar meaning is "gloating", where "gloat" is defined as "to observe or think about something with triumphant and often malicious satisfaction, gratification, or delight" (gloat over an enemy's misfortune).[13]

The internet slang term "lulz" (A variation of LOL) has acquired the connotation of fun or amusement at another person's expense, especially in regard to trolling behavior.

The transposed variant "Freudenschade" has been invented in English to mean sorrow at another person's success.[16][17]

Neologisms and portmanteau words were coined from the word as early as 1993 when Lincoln Caplan, in his book "Skadden: Power, Money, and the Rise of a Legal Empire",[18] used the word "Skaddenfreude" to describe the delight that competitors of Skadden Arps took in its troubles of the early 1990s. Another is "Spitzenfreude", coined by The Economist to refer to the fall of Eliot Spitzer.[19]

The Book of Proverbs mentions an emotion similar to that now described by the word schadenfreude: "Rejoice not when thine enemy falleth, and let not thine heart be glad when he stumbleth: Lest the LORD see it, and it displease him, and he turn away his wrath from him." (Proverbs 24:17–18, King James Version).

In the Nicomachean Ethics, Aristotle used the term epikhairekakia (ἐπιχαιρεκακία in Greek) as part of a triad of terms, in which epikhairekakia stands as the opposite of phthonos (φθόνος), and nemesis (νέμεσις) occupies the mean. Nemesis is "a painful response to another's undeserved good fortune", while phthonos is "a painful response to any good fortune", deserved or not. The epikhairekakos (ἐπιχαιρέκακος) person actually takes pleasure in another's ill fortune.[20][21]

During the 17th century, Robert Burton wrote in his work The Anatomy of Melancholy, "Out of these two [the concupiscible and irascible powers] arise those mixed affections and passions of anger, which is a desire of revenge; hatred, which is inveterate anger; zeal, which is offended with him who hurts that he loves; and ἐπιχαιρεκακία, a compound affection of joy and hate, when we rejoice at other men's mischief, and are grieved at their prosperity; pride, self-love, emulation, envy, shame, &c., of which elsewhere."[22]

The philosopher Arthur Schopenhauer mentioned Schadenfreude as the most evil sin of human feeling, saying famously "To feel envy is human, to savor schadenfreude is devilish."[23]

Susan Sontag's book "Regarding the Pain of Others", published in 2003, is a study of the issue of how the pain/misfortune of some affects others, namely whether war photography and war paintings can be helpful as anti-war tools or if they only serve some sense of schadenfreude in some viewers.

Philosopher and sociologist Theodor Adorno defined schadenfreude as “largely unanticipated delight in the suffering of another which is cognized as trivial and/or appropriate”.[24]

A New York Times article in 2002 cited a number of scientific studies of schadenfreude, which it defined as "delighting in others' misfortune." Many such studies are based on social comparison theory, the idea that when people around us have bad luck, we look better to ourselves. Other researchers have found that people with low self-esteem are more likely to feel schadenfreude than are people who have high self-esteem.[25]

A 2006 experiment suggests that men, but not women, enjoy seeing bad people suffer. The study was designed to measure empathy, by watching which brain centers are stimulated when subjects inside an fMRI observe someone experiencing physical pain. Researchers expected that the brain's empathy center would show more stimulation when those seen as good got an electric shock than they would if the shock was given to someone the subject had reason to consider bad. This was indeed the case, but for male subjects the brain's pleasure centers also lit up when someone else got a shock that the male thought was well-deserved.[26]

Brain-scanning studies show that schadenfreude is correlated with envy. Strong feelings of envy activated physical pain nodes in the brain's dorsal anterior cingulate cortex; the brain's reward centers, such as the ventral striatum, were activated by news that the people envied had suffered misfortune. The magnitude of the brain's schadenfreude response could even be predicted from the strength of the previous envy response.[27][28]

A 2009 study indicates that the hormone oxytocin may be involved in the feeling of schadenfreude.[29] In that study, it was reported that when participants in a game of chance were pitted against a player they considered arrogant, inhaling oxytocin through the nose enhanced their feelings of schadenfreude when their opponent lost as well as their feelings of envy when their opponent won.