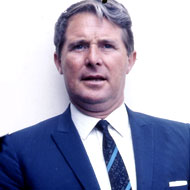 Ernest Wiseman OBE ( &ndash; ), better known by his stage name of Ernie Wise, was an English , best known as one half of the comedy duo , who became an institution on British , especially for their specials.

Ernest Wiseman changed his name (as did his partner) to go into show business. He joined the industry at an early age, appearing as an and in . Born in Bramley, , , his father, Harry, a railway lamp man, was also a semi-professional singer, and they appeared together under the name "Bert Carson and his Little Wonder". In 1939, while still a teenager, he appeared with top British comedian in his famous "" show, billed as England's .

Ernie joined forces with in 1941, and they became one of the greatest comedy s of all time. During , whilst Morecambe was a , Wise served in the .

They made their name in , transferring to television in 1954. In 1961 they got their own series on , transferring to in 1968. Over a period of nearly twenty years, they had regular series with both and . In 1976, they were both appointed OBEs.

Wise was commonly regarded as the of the partnership, although his role gradually and subtly changed over the years. When took over as their chief writer, he enriched Wise's persona by making him more pompous and naive. Wise's character changed from being a conventional straight man into a pretentious and self-satisfied idiot. Braben also made Wise a would-be writer; their classic BBC shows in the 1970s would always climax with an extended sketch, introduced by Ernie as "a play what I wrote." It was in just such a "play" that , at the height of her career, was made to speak the line "All men are fools, and what makes them so is having beauty like what I have got."

Following Morecambe's death from a heart attack in 1984, Ernie Wise spent some of his time at , where he had a holiday home. In the UK, he lived in for many years next door to singer , before moving to a luxury home on the banks of the in , .

Wise appeared regularly as a panellist on the revival of the popular panel show "What's My Line?". He was a guest several times on "Countdown", had a gardening column in the "" newspaper and also appeared in a few West End plays. In 1990 he wrote his autobiography, called "Still on my way to Hollywood" but he suffered a minor in December 1993, which was followed by a second minor stroke in August 1995. With his health declining, Wise announced his retirement from showbusiness on , his 70th birthday.

Three years later, in December 1998 his health seriously began to falter when he suffered two heart attacks within a week, and had to undergo a triple in , Florida on . Wise was due to take part in a BBC 1 tribute to Eric Morecambe but had to withdraw due to ill health. In March 1999 he was flown back to the UK by air ambulance and taken to hospital.

He was married to the Doreen Blythe from until his death;they had no children.

* His 1992 single was a recommended retail release in .