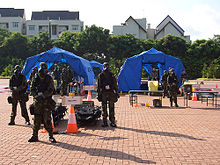 The Medical Response Force, a part of the CBRE, during an exercise.

The Chemical, Biological, Radiological and Explosive Defence Group (abbreviation: CBRE; Chinese: 生化武器、辐射性物质及爆炸物防御团) is a group formed by various Singapore Armed Forces (SAF) units to enhance counter-terrorism capabilities and provide an immediate response in the event of chemical and biological incidents.

The CBRE Group also works closely with the Singapore Civil Defence Force, Singapore Police Force, Ministry of Health, Ministry of the Environment, as well as the Defence Science and Technology Agency and DSO National Laboratories.

The group consists of two battalions from the Singapore Combat Engineers — the 36th and the 39th, specializing in Explosive Ordnance Disposal and chemical, biological and radiological defence respectively.

The Medical Response Force serves as the elite medical arm of the CBRE. It is tasked with managing and treating casualties from a chemical or biological attack. Apart from CBRE as a whole, it too, works closely with the Singapore Civil Defence Force.

In 17 January 2003, CBRE Defence Group conducted an exercise code-named Exercise Diamond Shield to demonstrate its capability in counter-terrorism. Another exercise was conducted on 20 January 2006, with simulated multiple CBRE incidents.[1]

In September 2005, CBRE Defence Group took part in a bilateral exercise with Australia code-named Star Lion in Sydney, to enhance its preventive and responsive capabilities.[2]

They also featured prominently in Exercise Northstar V, held on 8 January 2006 and involving an enactment of bombing and chemical attacks at four Mass Rapid Transit stations and a bus interchange.