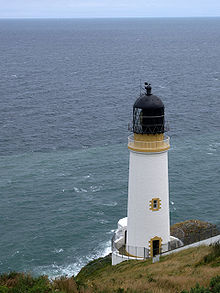 Maughold Head lies in the northeast of the island, some five kilometres from Ramsey, at the southern end of Ramsey Bay.

There is an unmanned lighthouse on the headland built by Charles Alexander Stevenson in 1914. The lighthouse is operated by the Northern Lighthouse Board.