STS-1
STS-1 is also an abbreviation for Synchronous Transport Signal (level)-1 in the SONET hierarchy.

STS-1 was the first orbital flight of NASA's Space Shuttle program. Space Shuttle Columbia launched on 12 April 1981, and returned to Earth on 14 April, having orbited the Earth 37 times during the 54.5-hour mission. It was the first American manned space flight since the Apollo-Soyuz Test Project on 15 July 1975. STS-1 was the only US manned maiden test flight of a new spacecraft system, although it was the culmination of atmospheric testing of the Space Shuttle orbiter.

The first launch of the Space Shuttle occurred on 12 April 1981, exactly 20 years after the first manned space flight, when the orbiter Columbia, with two crew members, astronauts John W. Young, commander, and Robert L. Crippen, pilot, lifted off from Pad A, Launch Complex 39, at the Kennedy Space Center. This was the first of 24 launches from Pad A. The launch took place at precisely 7 a.m. EST. A launch attempt two days earlier was scrubbed because of a timing problem in one of Columbia’s general-purpose computers.

Not only was this the first launch of the Space Shuttle, but it marked the first time that solid-fuel rockets were used for a NASA manned launch (although all of the Mercury and Apollo astronauts had relied on a solid-fuel motor in their escape towers.) STS-1 was also the first U.S. manned space vehicle launched without an unmanned powered test flight. The STS-1 orbiter, Columbia, also holds the record for the amount of time spent in the Orbiter Processing Facility (OPF) before launch – 610 days, the time needed for the replacement of many of its heat shield tiles.

The primary mission objectives of the maiden flight were to perform a general check out of the Space Shuttle system, accomplish a safe ascent into orbit and to return to Earth for a safe landing. The only payload carried on the mission was a Development Flight Instrumentation (DFI) package, which contained sensors and measuring devices to record the orbiter's performance and the stresses that occurred during launch, ascent, orbital flight, descent and landing. All of these objectives were met successfully, and the orbiter's spaceworthiness was verified.

During flight day 2, the astronauts received a phone call from Vice President George H. W. Bush. President Ronald Reagan originally intended to visit the Mission Control Center during the mission, but at the time was still recovering from an assassination attempt which had taken place two weeks before the launch.

STS-1 touches down at Edwards Air Force Base 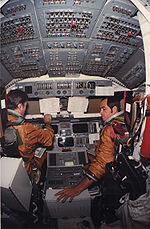 STS-1 was the first test flight of what was at the time the most complex spacecraft ever built. There were numerous problems – 'anomalies' in NASA parlance – on the flight, as many systems could not be adequately tested on the ground or independently. Some of the most significant are listed below:

Despite these problems, STS-1 was a successful test, and in most respects Columbia came through with flying colors. After some modifications to the shuttle and to the launch and re-entry procedures, Columbia would fly the next four Shuttle missions.

The artwork for the official mission insignia was designed by artist Robert McCall. It is a symbolic representation of the shuttle. The image does not depict the black wing roots present on the actual shuttle. 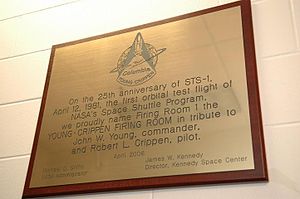 The plaque of the Young-Crippen Firing Room in the Launch Control Center at Kennedy Space Center.

The ultimate launch date of STS-1 fell on the 20th anniversary of Yuri Gagarin's Vostok 1, the first manned spaceflight. In 2001, Yuri's Night was established to celebrate both events. In a tribute to the 25th anniversary of the first flight of Space Shuttle, Firing Room 1 in the Launch Control Center at Kennedy Space Center – which launched STS-1 – was renamed the Young-Crippen Firing Room. NASA described the mission as "The boldest test flight in history".[8]

STS-1 was one of only two shuttle flights to have its External Tank (ET) painted white. To reduce the shuttle's overall weight, all flights from STS-3 onward used an unpainted tank. The use of an unpainted tank provided a weight savings of approximately 272 kilograms (600 lb),[9] and gives the ET the distinctive orange color which is now associated with the Space Shuttle.

The song "Countdown", by Rush, from the 1982 album Signals, was written about STS-1 and the inaugural flight of Columbia.[10] The song was "dedicated with thanks to astronauts Young and Crippen and all the people of NASA for their inspiration and cooperation".

IMAX cameras filmed the launch, landing, and mission control during the flight, for a film entitled Hail Columbia!, which debuted in 1982 and was later available on DVD. The title of the film comes from the pre-1930s unofficial American national anthem, Hail, Columbia.

NASA began a tradition of playing music to astronauts during the Gemini program, and first used music to wake up a flight crew during Apollo 15.[11] This special musical track at the start of each day in space is chosen, often by the astronauts' families, to have a special meaning to an individual member of the crew, or in reference to the day's planned activities.[12]