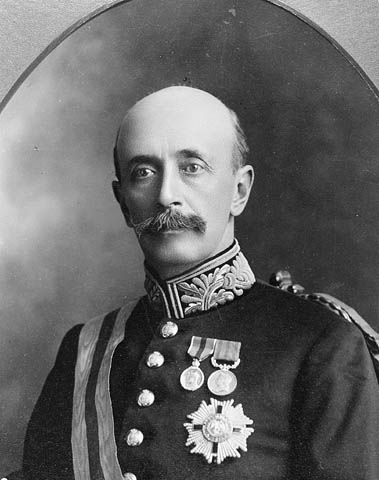 Grey was educated at Harrow and , where he studied history and law. He came from a family that had enjoyed successful political careers based on reform, including colonial reform. In 1846, his uncle, the 3rd Earl Grey, as Colonial Secretary, was the first to suggest that colonies should be self-sustaining and governed for the benefit of their inhabitants, instead of for the benefit of the United Kingdom. In 1877, he married Alice Holford and together they had five children, one of whom died in early childhood.

Grey succeeded his uncle as 4th Earl Grey in 1894. He travelled extensively throughout the , and was Administrator of from 1896 to 1897. He also gained commercial experience as the Director of the British South Africa Company from 1898 to 1904. He was one of the first four trustees responsible for the administration of the scholarship funds which established the . In 1904 he was appointed Governor General of Canada.

Lord Grey was a very active Governor General. He was in constant contact with the Prime Minister, offering ideas for social reform. He sought greater political inclusion for all, and worked to reach as many ordinary Canadians as possible. In fact, he was so dedicated and involved that then-prime minister Sir Wilfrid Laurier said Lord Grey gave "his whole heart, his whole soul, and his whole life to Canada".

Lord Grey was in office during a time of increasing economic development, industrialisation and immigration in Canada. Both and entered the Confederation in 1905. It was also a time of change. In 1911, Sir Wilfrid Laurier's government was defeated by Sir Robert Borden over the issue of trade reciprocity with the . King Edward VII died in 1910, and King George V was crowned in 1911.

Lord Grey travelled throughout Canada extensively, from the Maritimes to the north and to western Canada. He was the first Governor General to travel to Newfoundland, where he issued a warm invitation for them to join the Confederation. He also developed strong bonds with , the , visiting the United States on different occasions.

With his desire for social reform and cohesion, Lord Grey was a strong promoter of national unity among French and English Canadians, as well as a supporter of unity within the entire British Empire. He also advocated prison reforms in Canada to provide greater social justice.

On 16 June 1905, a second Commission was issued that appointed Lord Grey as "Governor General of Canada and Commander-in-Chief of the Dominion of Canada". This reflected the passing of the in 1904, and resulted in changes to the Letters Patent Constituting the Office of the Governor General.

Lord Grey sought to promote culture among Canadians. From 1906 to 1908, he was heavily involved in the Tercentenary, the celebrations, pageantry and social functions marking the 300th anniversary of the founding of the city. He also influenced the decision to have the Plains of Abraham, the battlefield where the French and English fought in 1759 which led to the fall of , designated a national park in .

for his contribution to the game.

At the request of Sir Robert Baden-Powell, he also undertook the role of Chief Scout of Canada. In 1907, Lord Grey received Canada's first important foreign royal visit, Prince of Japan. In 1908, as part of the Quebec Tercentenary celebrations, he welcomed the Prince of Wales (later King George V), who reviewed 12,000 Canadian military personnel along with a host of ships visiting Quebec.

Lady Grey was the first spouse of a Governor General to be designated as "Her Excellency", an appellation approved by King Edward VII. She was very interested in her husband's role and duties. She sponsored contests for beautiful gardens in , known as the "Lady Grey Competitions", (which continued a tradition begun during Lord Minto's term) and also planted s on the west lawn, which visitors to can still see today. Their daughter, Lady Evelyn Grey, was a champion figure skater.

During his term, Lord Grey added both the Governor General's study and a new conservatory (which was removed in 1923&ndash;24) to Rideau Hall. And upon his departure, he sold the State Landau, which he had purchased from the , to the Canadian government &mdash; the carriage is still used for official functions. Lord Grey also recommended that a "great" railway hotel be built in the nation's capital &mdash; an idea that grew into the .

Lord Grey and his wife received many accolades for their work with Canadians and for their championship of social reform.

On leaving office in 1911, Lord Grey and his family returned to England, where he became president of the Royal Colonial Institute (now the Royal Commonwealth Society) in . Grey died at his family residence in 1917. His son Charles succeeded to the title.