The Ocellaris Clownfish, Clownfish or False Percula Clownfish (Amphiprion ocellaris) is a popular aquarium fish. It is very closely related to A. percula, the Orange Clownfish or "True Percula Clownfish", and often lives in association with the sea anemone Heteractis magnifica, using them for shelter and protection. Generally, Ocellaris clownfish are hardier, and slightly less aggressive than its Percula counterpart. Both species are found in coral reefs of the Indo-Pacific, particularly in the Fiji and Tonga regions. 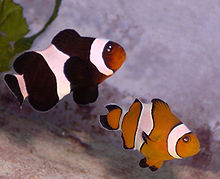 Two False Perculas, one normally colored and one of the black melanistic variety.

This clown anemonefish can be recognised by its orange colour with three white bars and black markings on the fins. It grows to about eight centimeters (three inches) in length. One can differentiate between Percula (true) and Ocellaris (false) by their respective colors and patterns. Ocellaris are usually less vibrantly colored, and have 11 dorsal fin-spines instead of 10, as on the Percula. Also, the species have different eye arrangements: Percula have bright orange irises, making their eyes appear smaller, whereas Ocellaris have grey/orange irises which make the species eyes appear bigger.

There is a rare melanistic variety hailing from the reefs around Darwin, Australia, that is a darker color with the normal white stripes. Although not common in the wild, they are becoming more and more popular in the aquarium hobby.

The species Amphiprion ocellaris belongs to the class Osteichthyes which contains bony fish and ray-finned fish. A. ocellaris is the most basal species in the genus Amphiprion which is closely related to the genera Premnas. The species' most closely related ancestor is Amphiprion percula, the Orange Clownfish. It is thought that A. ocellaris specialized after diverging from the Premnas genus, and scientific evidence confirms that all clownfish belonging to the genus Amphiprion could withstand the stings of only one type of anemone, after further diverging the 28 different species of clownfish including A. ocellaris specialized to be able to resist the poisonous stings of many different species[citation needed]. 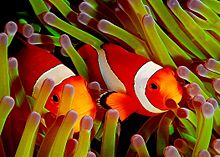 Clownfish have many structures which are analogous with other species, the distinctive stripes found on the clownfish can be seen in few animals. Lampropeltis triangulum elapsoidesor otherwise known as the Scarlet King Snake has a well-defined pattern of red, black and yellow bands. These two structures both have characterises that are similar in use, the bands of each species help warn off predators if the animal is in danger. These bands also help camouflage both organisms in each of their different environments. The bright orange base striped with white found on the clownfish allows it to be undetected in its surroundings of fluorescent corals and anemones. 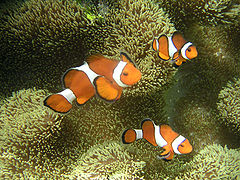 Clownfish are initially male; the largest fish in a group becomes female.

All fish have a mucus membrane surrounding their scales. The mucus usually contains high amounts of lipids and glycoproteins; however, the family Pomacentridae (anemone fish) have a special adaptation where the mucus coating the species is a great deal thicker. Also the protective layer lacks a specific substance that triggers nematocysts (the stings of an anemone); this allows the fish immunity against the toxic stings. Little is known about the mucus except that it is a genetically inherited trait and passed through the generations of each species. In other families of fish, the mucus is used as protection against harmful bacteria, an osmotic regulator and also aids the fish in nest making. The difference in mucuses has led to the divergent path of anemone fish and other species[citation needed].

The 2003 Disney/Pixar film, Finding Nemo featured the clown fish duo, Nemo (voiced by Alexander Gould) a juvenile clownfish, the title character/Marlin's son, and Marlin (voiced by Albert Brooks) as Nemo's overprotective father. Nemo's mother, Coral was also a clownfish but only featured at the beginning of the film before being killed by a barracuda. The film did not show that if this occurred in real life, Marlin would have changed sex to become the dominant female of the anemone. Coral should also have been bigger in size than Marlin.