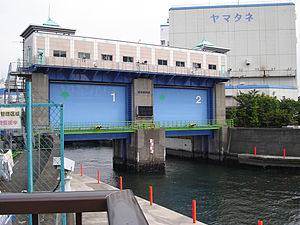 Floodgates are adjustable gates used to control water flow in flood barriers, reservoir, river, stream, or levee systems. They may be designed to set spillway crest heights in dams, to adjust flow rates in sluices and canals, or they may be designed to stop water flow entirely as part of a levee or storm surge system. Since most of these devices operate by controlling the water surface elevation being stored or routed, they are also known as crest gates. In the case of flood bypass systems, floodgates sometimes are also used to lower the water levels in a main river or canal channels by allowing more water to flow into a flood bypass or detention basin when the main river or canal is approaching a flood stage. 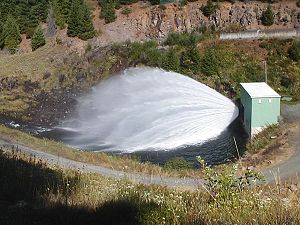 Discharge from a Howell-Bunger valve

Valves used in floodgate applications have a variety of design requirements and are usually located at the base of dams. Often, the most important requirement (besides regulating flow) is energy dissipation. Since water is very heavy, it exits the base of a dam with the enormous force of water pushing from above. Unless this energy is dissipated, the flow can erode nearby rock and soil and damage structures.

Other design requirements include taking into account pressure head operation, the flow rate, whether the valve operates above or below water, and the regulation of precision and cost.[citation needed]

In order to do a simple calculation of the force on a rectangular flood gate one can use the following equation:

measured in N/m2, which is called the pascal (Pa)

If the rectangular flood gate is submerged below the surface the same equation can be used but only the height from the water surface to the middle of the gate must be used to calculate the force on the flood gate.