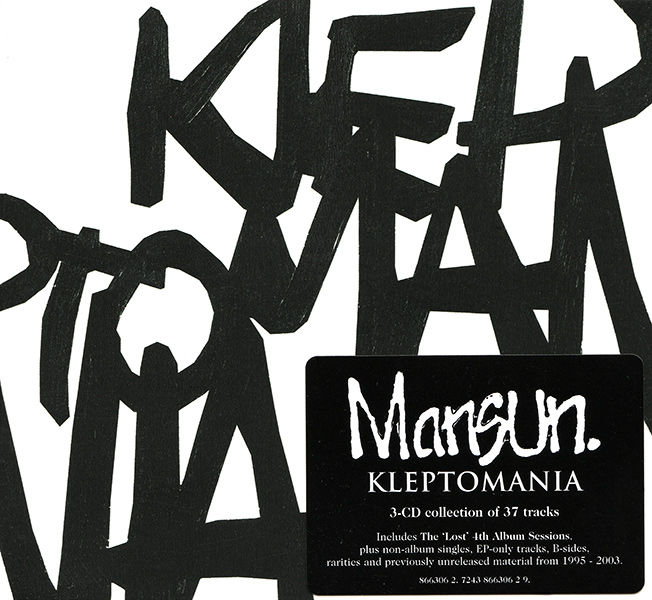 "Kleptomania" (released Autumn 2004) was the 'lost' fourth album by English rock group . Rather than being a fully fledged final album it's more a collection of recordings which were destined for the 4th album, mixed by Paul Draper following the bands split with no involvement from the other band members.

The band split during the final recording session for the fourth album, leaving some tracks incomplete and unfinished and thus weren't included on Kleptomania. The true reasons for the split have never been revealed but it seems the band simply "grew apart".

The album was initially going to be called simply "Mansun" but was later changed to "" for its commercial release. The reasons behind this title are ambiguous, as there are a number of rumours concerning the departure of bassist and founding member , and the band's relationship and contractual obligations with their record company, .

The album was originally not going to be released as there would be no band to promote it and Paul Draper was not in a positive frame of mind about Mansun at the time, but due to a fan petition which gained over 4000 signatures, the record company relented and put the album out as part of a CD boxset.

'The 4th Album Sessions'tracklist
title1 = Getting Your Way
length1 = 4:30

The sessions for "Kleptomania" display a change in musical direction from "Little Kix" and are much closer, musically to what the band released as off the album Six. From the opener Mansun have jettisoned the superficial "Wide Open Space" retreads of "Little Kix" and concentrated on a more ballsy ‘back to basics’ sound.

The first three songs (which were included on promo versions of the boxset) are the most complete and mainstream songs. "Getting Your Way" begins with a dirge-like chord progression then intensifies with a swagger the band hadn’t focused on since early songs like "She Makes My Nose Bleed" and "Take It Easy Chicken". "Slipping Away” (also a single) and "Keep Telling Myself" are much more focused rock songs. From "Harris" onwards it’s clear that Mansun still retain many of their idiosyncrasies. "Love Remains" is a short punk pop song where drums and a distorted guitar drive the song. In recent interviews Paul Draper stated in a recent interview that if the band had stayed together and released the 4th album properly, they would have issued "Love Remains" as the lead-off single.

Track six "Cry 2 My Face", is closest to the sound of "Little Kix", but its changes in tone mark it as a development from that sound. "No Signal/No Complaints" begins with a short piece called "These Days" (which is collected in it’s full length on the third "Kleptomania" disc) is also an example of Mansun’s previous style. Its negative lyrics and fractured progression are similar to the songs from "Six", it is similar to "Special/Blown it" in many respects. Paul Draper states in the sleeve notes that "Good Intentions Heal The Soul" was always intended to conclude the album. The song is one of the singers most open lyrics, throughout Mansun’s career; Draper had attempted to write lyrics which were more direct.

The album greatly pleased fans of the group who generally felt that it wrapped up the bands existence, or at least better than would have.

The track listing for Disc 2 was decided via an online poll on the band's official website which allowed fans to choose between every one of the bands and non-album singles. Paul Draper also chose to include "When the Wind Blows" and "Decisions, Decisions" which weren't in the top 20 tracks voted by fans.

Despite previewing several tracks from Kleptomania live on what was Mansun's final tour of 2003, did not feature on what was eventually released. Instead and Paul Draper shared bass duties.

Kleptomania was recorded at several locations including a recording studio owned by Jane Seymour, where fellow act recorded the acclaimed album and at which has been used by acts such as Queen and . Paul Draper later stated that the band literally split in the middle of recording "Cry 2 My Face"

“Slipping Away” was released as a download and 7" only single prior to the full release of Kleptomania. “Getting Your Way” was featured as the B-Side.

"Shot by Both Sides" is not only a Magazine cover but also one of the few Mansun songs sung by lead guitarist Dominic Chad.

The boxset includes a retrospect by Paul Draper in which he talks about each track included on the album.

Kleptomania contains a number of . The first disc contains an instrumental called "The dog from two doors down" (credited to "The Nurk Twins") The third disc contains three; "Thief" A different mix of an earlier EP B-side track. "Witness to an Opera" an instrumental version of a song from the bands second album "Six". And "Stupid Open Space" a bizarre jazz funk cover of Wide Open Space (credited to Mike Hunter).

"Rock 'n' Roll Loser" was mentioned on fan site "Mansunite", and was talked about on there as the possible first single from Little Kixx. However as mentioned in the sleeve notes of Kleptomania, the track soon lost interest and was left in the vaults until its addition on disc 3 of this album.

"South Of The Painted Hall", an unreleased track was recorded in 2001 during the intended sessions for the 4th Mansun album. It's now included as a free download on the CD.

* [http://exquisitelyboredinnacogdoches.blogspot.com/2006/02/she-was-weekend-hippie-yeah.html The Origin of "Nurk Twins"]