In molecular biology and genetics, mutations are changes in a genomic sequence: the DNA sequence of a cell's genome or the DNA or RNA sequence of a virus. They can be defined as sudden and spontaneous changes in the cell. Mutations are caused by radiation, viruses, transposons and mutagenic chemicals, as well as errors that occur during meiosis or DNA replication.[1][2][3] They can also be induced by the organism itself, by cellular processes such as hypermutation. A mutation is passed to the offspring stably, unless it is a dynamic mutation.

Mutation can result in several different types of change in sequences;(RNA) these can either have no effect, alter the product of a gene, or prevent the gene from functioning properly or completely. Studies in the fly Drosophila melanogaster suggest that if a mutation changes a protein produced by a gene, this will probably be harmful, with about 70 percent of these mutations having damaging effects, and the remainder being either neutral or weakly beneficial.[4] Due to the damaging effects that mutations can have on genes, organisms have mechanisms such as DNA repair to remove mutations.[1]

Viruses that use RNA as their genetic material have rapid mutation rates,[5] which can be an advantage since these viruses will evolve constantly and rapidly, and thus evade the defensive responses of e.g. the human immune system.[6]

Mutations can involve large sections of DNA becoming duplicated, usually through genetic recombination.[7] These duplications are a major source of raw material for evolving new genes, with tens to hundreds of genes duplicated in animal genomes every million years.[8] Most genes belong to larger families of genes of shared ancestry.[9] Novel genes are produced by several methods, commonly through the duplication and mutation of an ancestral gene, or by recombining parts of different genes to form new combinations with new functions.[10][11]

Here, domains act as modules, each with a particular and independent function, that can be mixed together to produce genes encoding new proteins with novel properties.[12] For example, the human eye uses four genes to make structures that sense light: three for color vision and one for night vision; all four arose from a single ancestral gene.[13] Another advantage of duplicating a gene (or even an entire genome) is that this increases redundancy; this allows one gene in the pair to acquire a new function while the other copy performs the original function.[14][15] Other types of mutation occasionally create new genes from previously noncoding DNA.[16][17]

Changes in chromosome number may involve even larger mutations, where segments of the DNA within chromosomes break and then rearrange. For example, in the Homininae, two chromosomes fused to produce human chromosome 2; this fusion did not occur in the lineage of the other apes, and they retain these separate chromosomes.[18] In evolution, the most important role of such chromosomal rearrangements may be to accelerate the divergence of a population into new species by making populations less likely to interbreed, and thereby preserving genetic differences between these populations.[19]

Sequences of DNA that can move about the genome, such as transposons, make up a major fraction of the genetic material of plants and animals, and may have been important in the evolution of genomes.[20] For example, more than a million copies of the Alu sequence are present in the human genome, and these sequences have now been recruited to perform functions such as regulating gene expression.[21] Another effect of these mobile DNA sequences is that when they move within a genome, they can mutate or delete existing genes and thereby produce genetic diversity.[2]

For example, a butterfly may produce offspring with new mutations. The majority of these mutations will have no effect; but one might change the color of one of the butterfly's offspring, making it harder (or easier) for predators to see. If this color change is advantageous, the chance of this butterfly surviving and producing its own offspring are a little better, and over time the number of butterflies with this mutation may form a larger percentage of the population.

Neutral mutations are defined as mutations whose effects do not influence the fitness of an individual. These can accumulate over time due to genetic drift. It is believed that the overwhelming majority of mutations have no significant effect on an organism's fitness. Also, DNA repair mechanisms are able to mend most changes before they become permanent mutations, and many organisms have mechanisms for eliminating otherwise permanently mutated somatic cells.

Mutation is generally accepted by biologists as the mechanism by which natural selection acts, generating advantageous new traits that survive and multiply in offspring as well as disadvantageous traits, in less fit offspring, that tend to die out.

Spontaneous mutations on the molecular level can be caused by:[23] 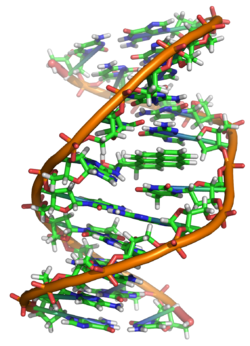 A covalent adduct between benzo[a]pyrene, the major mutagen in tobacco smoke, and DNA[24]

Induced mutations on the molecular level can be caused by:

DNA has so-called hotspots, where mutations occur up to 100 times more frequently than the normal mutation rate. A hotspot can be at an unusual base, e.g., 5-methylcytosine.

Mutation rates also vary across species. Evolutionary biologists[citation needed] have theorized that higher mutation rates are beneficial in some situations, because they allow organisms to evolve and therefore adapt more quickly to their environments. For example, repeated exposure of bacteria to antibiotics, and selection of resistant mutants, can result in the selection of bacteria that have a much higher mutation rate than the original population (mutator strains). 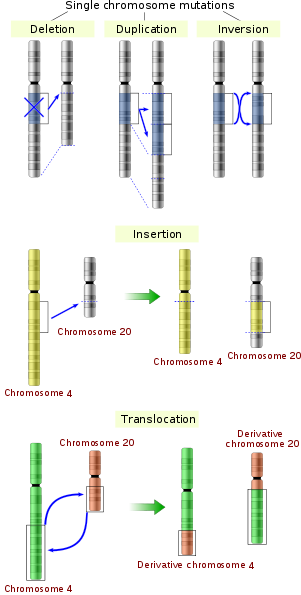 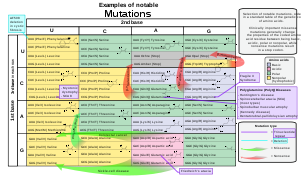 Selection of disease-causing mutations, in a standard table of the genetic code of amino acids.[28]

By effect on structure

The sequence of a gene can be altered in a number of ways. Gene mutations have varying effects on health depending on where they occur and whether they alter the function of essential proteins. Mutations in the structure of genes can be classified as:

By effect on function

By effect on fitness

In applied genetics it is usual to speak of mutations as either harmful or beneficial.

In theoretical population genetics, it is more usual to speak of such mutations as deleterious or advantageous. In the neutral theory of molecular evolution, genetic drift is the basis for most variation at the molecular level.

By pattern of inheritance The human genome contains two copies of each gene – a paternal and a maternal allele.

By impact on protein sequence

In contrast, any insertion or deletion that is evenly divisible by three is termed an in-frame mutation 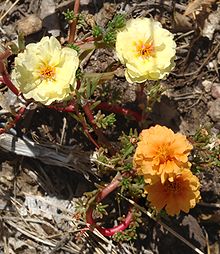 A mutation has caused this garden moss rose to produce flowers of different colors. This is a somatic mutation that may also be passed on in the germ line.

If the organism can reproduce asexually through mechanisms such as cuttings or budding the distinction can become blurred. For example, plants can sometimes transmit somatic mutations to their descendants asexually or sexually where flower buds develop in somatically mutated parts of plants. A new mutation that was not inherited from either parent is called a de novo mutation. The source of the mutation is unrelated to the consequence[clarification needed], although the consequences are related to which cells were mutated.

A committee of the Human Genome Variation Society (HGVS) has developed the standard human sequence variant nomenclature,[36] which should be used by researchers and DNA diagnostic centers to generate unambiguous mutation descriptions. In principle, this nomenclature can also be used to describe mutations in other organisms. The nomenclature specifies the type of mutation and base or amino acid changes.

Changes in DNA caused by mutation can cause errors in protein sequence, creating partially or completely non-functional proteins. To function correctly, each cell depends on thousands of proteins to function in the right places at the right times. When a mutation alters a protein that plays a critical role in the body, a medical condition can result. A condition caused by mutations in one or more genes is called a genetic disorder. Some mutations alter a gene's DNA base sequence but do not change the function of the protein made by the gene. Studies of the fly Drosophila melanogaster suggest that if a mutation does change a protein, this will probably be harmful, with about 70 percent of these mutations having damaging effects, and the remainder being either neutral or weakly beneficial.[37] However, studies in yeast have shown that only 7% of mutations that are not in genes are harmful.[38]

If a mutation is present in a germ cell, it can give rise to offspring that carries the mutation in all of its cells. This is the case in hereditary diseases. On the other hand, a mutation may occur in a somatic cell of an organism. Such mutations will be present in all descendants of this cell within the same organism, and certain mutations can cause the cell to become malignant, and thus cause cancer.[39]

Often, gene mutations that could cause a genetic disorder are repaired by the DNA repair system of the cell. Each cell has a number of pathways through which enzymes recognize and repair mistakes in DNA. Because DNA can be damaged or mutated in many ways, the process of DNA repair is an important way in which the body protects itself from disease.

Although mutations that change protein sequences are predominantly harmful to an organism; on occasion, the effect can be neutral or positive in a given environment. In this case, the mutation may enable the mutant organism to withstand particular environmental stresses better than wild-type organisms, or reproduce more quickly. In these cases a mutation will tend to become more common in a population through natural selection.

For example, a specific 32 base pair deletion in human CCR5 (CCR5-Δ32) confers HIV resistance to homozygotes and delays AIDS onset in heterozygotes.[40] The CCR5 mutation is more common in those of European descent. One possible explanation of the etiology of the relatively high frequency of CCR5-Δ32 in the European population is that it conferred resistance to the bubonic plague in mid-14th century Europe. People with this mutation were more likely to survive infection; thus its frequency in the population increased.[41] This theory could explain why this mutation is not found in southern Africa, where the bubonic plague never reached. A newer theory suggests that the selective pressure on the CCR5 Delta 32 mutation was caused by smallpox instead of the bubonic plague.[42]

Another example is Sickle cell disease, a blood disorder in which the body produces an abnormal type of the oxygen-carrying substance hemoglobin in the red blood cells. One-third of all indigenous inhabitants of Sub-Saharan Africa carry the gene,[43] because in areas where malaria is common, there is a survival value in carrying only a single sickle-cell gene (sickle cell trait).[44] Those with only one of the two alleles of the sickle-cell disease are more resistant to malaria, since the infestation of the malaria plasmodium is halted by the sickling of the cells which it infests.

Prions are proteins and do not contain genetic material. However, prion replication has been shown to be subject to mutation and natural selection just like other forms of replication.[45]