The WHAS Crusade for Children is an annual telethon broadcast by WHAS-TV and WHAS (AM) Radio in Louisville, Kentucky. The telethon benefits a wide range of children's charities throughout Kentucky and southern Indiana.

The Crusade was begun in 1954, in large part through the efforts of Barry Bingham, Sr., the patriarch of the family that owned the stations and The Courier-Journal newspaper. The first telethon was telecast from the Memorial Auditorium, and featured actor Pat O'Brien as the celebrity guest. Contributions on the first telethon totaled more than $156,000.

Since its founding, the Crusade has raised more than $138 million for local children's special needs.

The Crusade has become a major local institution. For months before the telethon broadcast each June, grass-roots collection efforts are held throughout the area — from "pickle jars" at restaurants, to bingo games, to benefit concerts and hundreds of similar events. 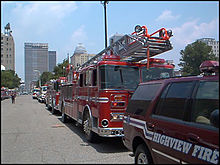 Fire Departments are preparing to go on-air with the WHAS Crusade for Children; this one is the Highview, Kentucky Fire Dept.

The backbone of the collection efforts, and the signature of the Crusade itself, are the dozens of local fire departments who collect millions of dollars each year. Most of those donations come at road blocks set up at hundreds of intersections throughout the region, where firefighters ask motorists to put donations in boots. On a Saturday or Sunday in late spring, it's not uncommon for someone driving across metro Louisville to encounter multiple road blocks manned by volunteers.

During the telethon, each fire department brings in those donations, literally dumping them out of the boots and into "fishbowls" (aquarium-like containers) before the cameras. Before the "dump," a representative from each department usually reads a list of significant contributors, businesses who helped the department during fund-raising efforts, and numerous others who helped in any way — a process that is time-consuming and boring to many outsiders, but an endearing tradition of the Crusade that locals look forward to. Crusade organizers have tried to streamline this process of the years, with mixed results.

In the past, the fire departments brought the collections directly to the television studio, parading their trucks down the street outside with sirens blaring. But the number of participating departments has become so large that in recent years, broadcast crews have set up remote locations in outlying communities such as Elizabethtown, Corydon and elsewhere. (This also keeps the firefighters from having to bring their trucks all the way to Louisville, and closer to home in case they're needed to fight a fire.) The increase in fire department donations has forced the Crusade to broadcast a pre-telethon show, featuring the departmental reports and remotes from across the area. In 2007, Crusade organizers simply moved the official start of the broadcast to 1:30 p.m. local time, with a one-hour break for local and World News Tonight newscasts at 6:00 p.m. The 2008 Crusade followed a similar schedule, except for a two-hour break Saturday afternoon for the ABC broadcast of the 2008 Belmont Stakes; the telethon broadcast its final total during halftime of Sunday night's ABC broadcast of Game 2 of the 2008 NBA Finals. In 2011 the Crusade ended at 6:30 p.m., in order to clear the 2011 NBA Finals, the earliest on-air finish in many years.[2]

Departments compete each year to win the Jim Walton Trophy, given to departments that record the largest percentage increase in donations from the previous year. The trophy is named for Jim Walton, a WHAS-TV personality who was the Crusade's master of ceremonies for 26 years, and was its first executive director. Fire department collections typically account for more than half of the Crusade's final total each year.

Almost every Crusade features a celebrity guest, who usually performs on Saturday night during a variety-show segment that leads off the Crusade telecast. In 2006, Peabo Bryson made his second appearance as the headline guest. In 2007, The Kentucky Headhunters — whose origins are in Edmonton, Kentucky — are the headliners. Other past guests have included magicians Lance Burton and Mac King (two Las Vegas headliners with roots in Louisville), Kenny Rogers, Lee Greenwood, Steve Wariner, Ricky Skaggs, Tammy Wynette, Alan Thicke, Bobby Goldsboro, B. J. Thomas, Florence Henderson, Diahann Carroll, McLean Stevenson, Merv Griffin, Eydie Gorme, and Cab Calloway.

Larnelle Harris, a popular Gospel singer and Louisville resident, has appeared on many Crusade telecasts. Other local artists with multiple Crusade appearances include Melissa Combs, Karen Kraft and Kiks, The Monarchs, and Louisville's Thoroughbred Chorus, a world champion men's barbershop chorus. Mel Owen directed the Crusade Orchestra for many decades; Roger Dane took over after his retirement, and now Todd Hildreth holds that position with the retirement of Roger Dane.

The Crusade broadcast goes on through the night, as is traditional with most telethons, but much of the overnight portion of the show is taped beforehand.

In recent years, all or portions of the Crusade have been telecast by stations other than WHAS television and radio. In 2007, television stations in Bowling Green (WBKO), Lexington (WKYT), Paducah (WQTV/WQWQ) and Hazard (WYMT-TV) carried portions of the broadcast, as well as sister station (WBKI) in Louisville. In 2010 and 2011, WBKO carried remote broadcasts of its own from locations in south Central Kentucky, hosted by staff meteorologist Chris Allen.

The Crusade is also webcast via their web site.

Where the money goes

Throughout the year, various agencies throughout Kentucky and southern Indiana apply for grants from the Crusade. These applications are considered and grants made by the Crusade Advisory Panel, a group of local clergy. This task was originally administered by the panel of The Moral Side of the News, a long-running public affairs program on WHAS-TV and Radio where local clergy discuss current events. (The program remains one of the longest-running continually-aired broadcasts of any kind in radio history.) In later years, the panel's Crusade duties grew larger than the program, hence the name change in recent years; additionally, other members outside of the show have been added to the panel, so that the Moral Side panel members are now a subset of the Crusade Advisory Panel.

Grants are made in all 120 Kentucky counties and in 50 Indiana counties. The Crusade returns donations from a certain area to that area — for instance, donations from Hardin County will be assigned to grant requests from that county. This has been Crusade policy since the beginning. All grants are on an annual basis; thus, charities must reapply each year. Grant requests typically total about three times the amount collected.

The Crusade prides itself in the fact that 100% of all donations go directly to grants, a fact particularly emphasized in its 2011 campaign. All overhead costs of the Crusade organization are covered by donations from businesses, and more recently from proceeds of an endowment set up for that purpose. During the years of Bingham family ownership of WHAS, the stations and the family covered many of such costs.

Former Jefferson County Judge-Executive Rebecca Jackson was named the Crusade's executive director in 2005. Jackson was the first Crusade director to come from outside the WHAS corporate organization. She replaced Dan Miller, a longtime WHAS-TV employee who left in 2004 to become vice president at Georgetown College in Georgetown, Kentucky. Jackson retired at the end of 2008.[5] Dawn Dison Lee became the new Crusade director in February 2009.[5]

In 2010, an indictment was brought against Paul Barth, chairman of the Crusade's board of directors and then chief of the McMahan Fire Protection District volunteer fire department. The charges accused Barth of federal mail fraud, money laundering and embezzlement, among other charges. Barth was accused of embezzling at least $189,000 from the Crusade. Barth faces trial in October 2011, In response, Crusade officials tightened controls on handling of cash and other procedures.[2]