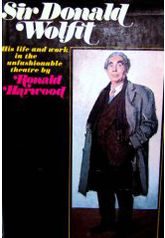 Cover of Wolfit's biography by his former dresser, Ronald Harwood.

Wolfit, who was "Woolfitt" at birth[2] was born at New Balderton, near Newark-on-Trent, Nottinghamshire and attended the Magnus Grammar School (now Magnus Church of England School) and made his stage début in 1920. He first appeared in the West End in 1924, playing in The Wandering Jew[2] but had limited success afterwards, though he played some major supporting roles at the Old Vic Theatre in 1930 (including Claudius to the first Hamlet of John Gielgud, whom Wolfit envied and strove to rival.[2] Wolfit appeared in the hit play Richard of Bordeaux, again in support of Gielgud. Wolfit finally made a name for himself at the Shakespeare Memorial Theatre in 1936 as Hamlet, and he tried to persuade the management to finance him on a tour of the provinces. They declined the invitation, so he withdrew his savings and started his own touring company in 1937,[3] which he would lead for many years, prompting Hermione Gingold's bon mot, 'Olivier is a tour-de-force, and Wolfit is forced to tour.'[2]

Wolfit's speciality was Shakespeare. He was known especially for his performances as King Lear and Richard III as well as Oedipus, Ben Jonson's Volpone and Christopher Marlowe's Tamburlaine. His touring company performed in London during the Battle of Britain in 1940 and Wolfit staged a very successful series of abridged versions of Shakespeare's plays in London during World War II in the early afternoon for lunchtime audiences, but he was unpopular with American critics when he took the company to Broadway in 1947. He appeared at Stratford during the 1950s in his signature role of King Lear, and was invited to play Falstaff at the RSC in 1962 but angrily turned the offer down when he discovered that Paul Scofield would be playing Lear there at the same time, saying "Lear is still the brightest jewel in my crown!"[4]

Wolfit was primarily a stage actor, although he appeared in over thirty films, most notably Blood of the Vampire, Becket, and Lawrence of Arabia.

He worked a good deal for the BBC, playing King John and Volpone on television, and Lear, Falstaff and Richard III for radio - as well as less predictable parts like Archie Rice in The Entertainer.

At one time, Ronald Harwood was his dresser and he based his play The Dresser (later turned into a film) on his relationship with Wolfit. Harwood also wrote his biography. Peter O'Toole, who worked with Wolfit on several films and plays over the course of his career, considered Wolfit his most important mentor. Wolfit was also an important influence on the early acting career of Harold Pinter, who worked for the Donald Wolfit Company, King's Theatre, Hammersmith, in 1953–54, performing eight roles with him.[5]

Wolfit's last appearance on stage was in a musical, as the domineering Mr Barrett in Robert and Elizabeth in 1966–67. His final two films, Decline and Fall... of a Birdwatcher and The Charge of the Light Brigade, were released posthumously.

He died from cardiovascular disease in London at the age of 65.

Wolfit was made a Knight Commander of the Order of the British Empire in 1957 for his services to the theatre.

He was nominated for BAFTA Awards for his performances in Svengali (1954) and Room at the Top (1959).