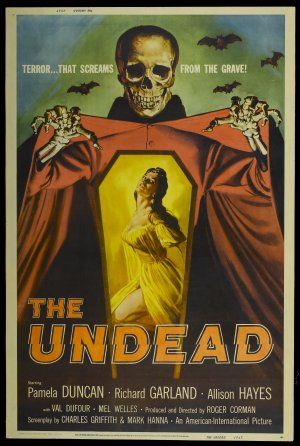 "The Undead" is a 1957 directed by starring Pamela Duncan, Richard Garland, Allison Hayes, and Val Dufour. It follows the story of prostitute Diana Love (Duncan) who is put into a hypnotic trance by psychic Quintis (Dufour), thus causing her to regress back to a previous life as Helene, a woman from the Middle Ages who is to die at dawn under suspicion of being a witch. Star also starred in "" (1958). "The Undead" was later featured on "" during its eighth season. was also featured as , as well as as an evil imp.

*Filmed in a converted supermarket.
*The film was completed in six days.
*Inspired (as was the film "") by the interest during the 1950s in especially the book "" by which was itself filmed in 1956.