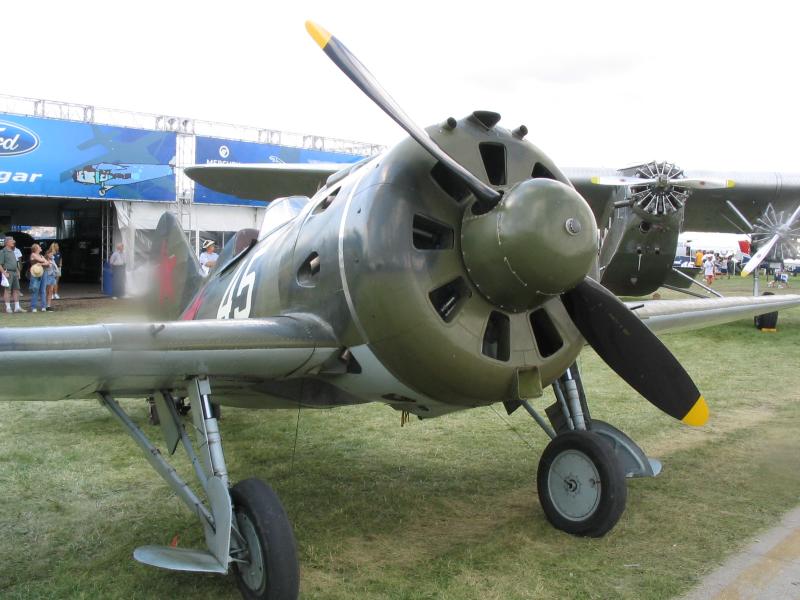 While working on the biplane, began designing an advanced monoplane fighter. It featured cutting-edge innovations such as retractable landing gear and a fully enclosed cockpit, and was optimized for speed with a short stubby fuselage (similar to ) and a radial engine in a . The aircraft was small, light and simple to build.

Full-scale work on the TsKB-12 prototype began in June 1933 and the aircraft was accepted into production on , a month before it ever took to the air. The TsKB-12 was of mixed construction using a wooden monocoque fuselage and wings based around a KhMA chrome-molybdenum steel alloy wing spar, dural ribs and D1 aluminum alloy skinning on the center and leading edges, with the remaining portions of the wings fabric covered. Another modern feature were the s which ran almost the entire trailing edge of the wing and also operated as flaps (in the manner of more modern s) by drooping 15°. The cockpit was covered by a 40cm wide canopy which featured an Aldis turbular gun sight which could slide back and forth on runners fitted with bungee cords of rubber. A 225 liter (59.4 US gallon) fuel tank was fitted directly in front of the cockpit. The main gear was fully retractable by a hand-crank. The armament consisted of a pair of 7.62 mm (0.30 cal) machine guns in the wings, mounted on the outboard side of the main gear and carried 900 rounds of ammo. These features were proposed at first by Andrei N. Tupolev, however the NII V-VS was more concerned about the stresses a typical combat aircraft was subjected to in combat, and it initially considered to be too big of a risk. However TsAGI, with the help of the 3rd Design Birgade under the leadership of Pavel O. Sukhoi and Aleksandr P. Putylov eventually convinced NII V-VS that what was being proposed was not only feasible, but would enhance the aircraft's performance. The TsKB-12 was designed around the Wright Cyclone SR-1820-F-3 nine cylinder radial engine (rated at 710 HP) which was being negotiated to be licence built. As the license was not yet approved, Polikarpov was asked to settle for the less powerful M-22 (Soviet-built version of the Gnome-Rhone Jupiter 9ASB which itself was a licensed version of the VI ) with 480 hp. This was deemed acceptable because the projected top speed still exceeded 300 km/h (185 mph).

The M-22 powered TsKB-12 first took to the air on with the famous Soviet test pilot at the controls. The second TsKB-12 with a Cyclone engine and three-bladed propeller flew in January of the following year. Initial government trials in February 1934 revealed very good maneuverability but the aircraft did not tolerate abrupt control inputs. Thus the TsKB-12 was deemed dangerous to fly and all s were forbidden. The M-22 version was preferred due to vibration of the Cyclone-powered aircraft. Pilots commented early on about difficulty in climbing into the cockpit, a trait that persisted through I-16's service life. Before continuing test flights the designers had to answer the question of spin behavior. testing suggested that TsKB-12 with its short tail would enter an unrecoverable flat spin, but real-life trials were necessary to confirm this. Since Cyclone engines were rare it was decided to risk the M-22 prototype for this purpose. On and , Chkalov performed 75 spins and discovered that the aircraft had very benign stall behavior (dipping a wing and recovering without input from the pilot when airspeed increased) and intentional spins could be easily terminated by placing controls in the neutral position. The stories of vicious spin behavior of the I-16 perpetuated in modern literature is unfounded (perhaps extrapolated from Gee Bee experience). The I-16's stablemate, in fact, the , exhibited much worse spin characteristics.

Service trials of the new fighter, designated I-16, began on . The M-22 prototype reached 359 km/h (223 mph). The manually-retracted landing gear was prone to jamming and required considerable strength from the pilot. Most of the test flights were performed with the gear extended. , the M-22 prototype participated in the flyover of the . Approximately 30 I-16 Type 1 aircraft were delivered, but were not assigned to any V-VS fighter eskadriliya. Most pilots that flew the I-16 Type 1 for evaluation puporses did not find the plane to have any redeeming characteristics. Regardless of pilot opinion, much attention was focused on the Cyclone powered aircraft and the M-25 (the license built Cyclone). On , the Cyclone prototype was damaged when one of the landing gear legs collapsed while it was taxiing.

The third prototype with a Cyclone engine incorporated a series of aerodynamic improvements and was delivered for government trials on . The top speed of 437 km/h (270 mph) no longer satisfied the Air Force, who now wanted the experimental engine and 470 km/h (290 mph). Subsequently, the M-22 powered version entered production at Factory 21 in and Factory 39 in . Because it was the fourth aircraft produced by these factories it received the designation I-16 Type 4. Type 4 aircraft fitted with these new engines required a slightly changed airframe, these changes included armour plating for the pilot and changes to the retract doors to allow for complete closure.

The M-25 fitted I-16, the I-16 Type 5, featured more changes, including a new engine cowling which was slightly smaller in diameter, had nine forward facing shuttered openings to control cooling flow and a redesigned exhaust with eight individual outlet stubs. The M-25 was rated at 635 hp at sea level and 700 hp at 2,300 m. Due to the poor quality of the canopy glazing, the I-16 Type 5 pilots typically left the canopy open or removed the rear portion completely. By the time the Type 5 arrived, it was the world's lightest production fighter (1,460 kg / 3,219 lbs), as well as the worlds fastest, able to reach speeds of 454 km/h (282 mph) at alititude and 395 km/h (245 mph) at sea level. While the Type 5 could not perform the high-g maneuvers of other fighters, it possessed superior speed and climb rates, and had extremely responsive aileron control which gave the Type 5 a very good roll rate which lead to precision maneuvers in loops and split-Ss.

Initial service experience revealed that the machine guns had a tendency to jam. This was the result of the guns being installed in the wings upside-down to facilitate the fit. The problem was addressed in later modifications. Evaluations from pilots confirmed the experience with prototypes. Controls were light and very sensitive, abrupt maneuvers resulted in spins, and spin behavior was excellent. A barrel roll could be performed in under 1.5 seconds (roll rate over 240 degrees/second). The machine guns were fired via a cable and the required effort, coupled with sensitive controls, made precision aiming difficult. The rear weight bias made I-16 easy to handle on unprepared airfields because the aircraft was rather unlikely to flip over the nose even if the front wheels dug in. The canopy tended to become fouled with engine oil and the moving portion was prone to slamming shut during hard maneuvers which caused many pilots to fix it in the open position.

The start of in 1936 saw pleas from the Republican forces for fighter aircraft. After receiving payment in gold, dispatched around 500 I-16 Type 5s and Type 6s. The aircraft immediately began dominating the enemy , and biplanes, and remained unchallenged until the introduction of the . A number of aviation publications called the new Soviet fighter a "Boeing" due to the incorrect assumption that it was based on the 's design. The Nationalists nicknamed the stubby fighter "Rata" (Rat), while the Republicans affectionally called it "Mosca" (Fly).

Combat experience showed that the I-16 had deficiencies; several aircraft were lost after structural failure of the wings which was quickly remedied by reinforced structures. Heavy machine gun bullets could sometimes penetrate the armored backrest and fuel tanks occasionally caught fire in spite of being protected. The hot Spanish climate required addition of oil radiators and dust adversely affected the life of the engines. Although some aircraft accumulated up to 400 hours of flying time, the average life of an I-16 was 87 days, of which one sixth was spent on maintenance. The biggest complaint in service was the light armament of only two 7.62 mm (0.30 cal) s. This was urgently addressed with Type 6 which added a third ShKAS in the bottom of the fuselage. The four-gun Type 10 was nicknamed "Super Mosca" or simply "Super."

Further attempts were made to upgrade the firepower of the aircraft using 20 mm (0.8 in) cannons, making the I-16 one of the most heavily armed fighters of that moment [Price 1975, p. 78.] , able to fire twenty-eight pounds of ammunition in three seconds. Pilots loved the results, but the cannons were in short supply and only a small number of I-16 Type 12, 17, 27, and 28 were built. The cannons adversely affected performance with the 360° circle time increasing from 15 seconds in Type 5 to 18 seconds. Type 24 replaced the skid with a tailwheel and featured the much more powerful 670 kW (900 hp) engine. Type 29 replaced two of the ShKAS guns with a single 12.7 mm (.50 cal) UBS. Types 18, 24, 27, 28, and 29 could be equipped to carry unguided rockets.

A 1939 government study found that I-16 had exhausted its performance potential. Addition of armor, radio, battery, and flaps during the aircraft's evolution exacerbated the rear weight distribution to the point where the aircraft required considerable forward pressure on the stick to maintain level flight and at the same time developed a tendency to enter uncontrolled dives. Extension and retraction of the landing flaps caused a dramatic change in the aircraft attitude. Accurate gunfire was difficult.

By 1941, the I-16 was still the most numerous Soviet fighter and made up about two-thirds of the VVS. The pilots nicknamed the aircraft Ishak (Russian: Ишак, "Donkey"/"") because it was similar to the Russian pronunciation of "I-16." The I-16 performance was generally equal to that of the (of the era) at altitudes up to the 3,000 m, where the I-16 could fight the Messerschmitt Bf 109 '"Emil" on equal terms in turns and had a more durable engine due liquid cooled engine of the Bf 109. The I-16 was slightly more maneuverable than the early Bf 109's, but the Bf 109 could use its advantages in slashing climbing and diving attacks to bring an I-16 down. Skilled pilots took advantage of its superior horizontal maneuverability and liked the aircraft enough to resist the switch to more modern fighters. About half of all produced I-16s were still in service in 1943, when they were finally replaced.

Specially modified I-16s were used in the Zveno experiments using the mothership.

In the early 1990s, New Zealand pilot and entrepreneur Tim (later Sir Tim) Wallis' organised the restoration of six I-16s and three I-153s to an airworthy condition, this project being completed in 1999 as the third and final I-153 arrived in New Zealand. After a spectacular international debut at the airshow in 1998 (for the I-16s) and 2000 (for the I-153s), some of the aircraft were sold off around the world, to the Commemorative Air Force in the U.S. (as pictured above), to Jerry Yagen of Virginia, and an I-16 to Spain, where it is held in the collection of the Fundación Infante de Orleans at Cuatro Vientos airport, Madrid, and is occasionally flown for the public. Some of the I-16s and I-153s remain at Wanaka awaiting sale, although it is intended to keep one of each at the NZFPM, Wanaka, see References. Jerry Yagen also had a second I-16 restored in Russia.