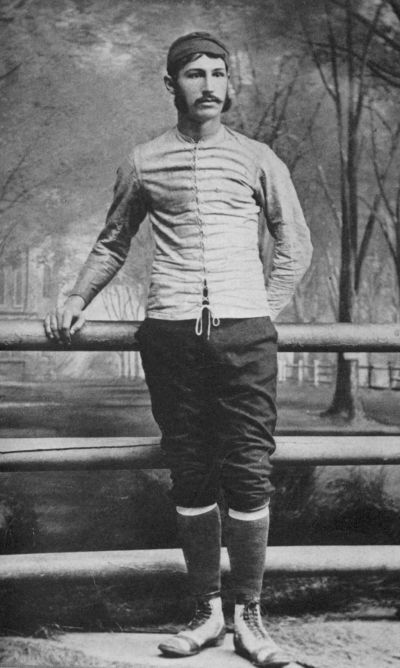 Walter Chauncey Camp (, &ndash; , ) was a sports writer and coach known as the "Father of American Football". Among , , , , and , Walter C. Camp was one of the most accomplished persons in the .

Camp was born in the city of , the son of Leverett L. and Ellen Cornwell Camp. He attended Hopkins Grammar School in New Haven, entered in 1876 and was graduated in 1880. At Yale he was a member of fraternity.

By the age of thirty-three, a scant twelve years after graduating from Yale, Walter Camp had already become known as the "Father of American Football". In a column in the popular magazine "", sports columnist had applied the nickname; the sobriquet was appropriate because, by 1892, Camp had almost single-handedly fashioned the game of modern American football.

For almost 50 years, Camp served on the various collegiate football rules committees that developed the game of gridiron during that time. His opinions, especially in his early years, and the introduction of the now standard offensive arrangement of players (a seven-man offensive line and a four-man backfield consisting of a quarterback, two halfbacks, and a fullback). Camp was also responsible for introducing the "safety", the awarding of two points to the defensive side for tackling a ball carrier in his own "end zone". This is significant as has no point value award for this action. But, as in rugby union, a free kick by the offense from its own 20-yard line (to change possession) occurs immediately following a safety. But Camp knew that developing the game was not enough; in order for it to catch on, the word had to spread.Despite having a full-time job at the New Haven Clock Company and being an unpaid yet very involved advisor to the Yale football team, Camp wrote articles and books on gridiron and also on sports in general. By the time of his death, he had written nearly 30 books and more than 250 magazine articles. His articles appeared in national periodicals such as , "Collier's", "Outing", "Outlook", and "The Independent", and in juvenile magazines such as "St. Nicholas", "Youth's Companion" and "Boys' Magazine". His stories also appeared in major daily newspapers throughout the United States.

According to his biographer, Richard P. Borkowski, "Camp was instrumental through writing and lecturing in attaching an almost mythical atmosphere of manliness and heroism to the game not previously known in American team sports."

Camp became one of the highest paid non-fiction writers in America, and he wrote to instruct Americans on his beloved game of gridiron.