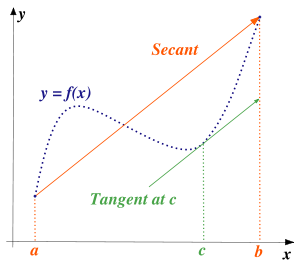 For any function that is continuous on [a, b] and differentiable on (a, b) there exists some c in the interval (a, b) such that the secant joining the endpoints of the interval [a, b] is parallel to the tangent at c. 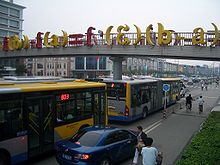 The Government of Beijing celebrates the Mean Value Theorem

In calculus, the mean value theorem states, roughly, that given an arc of a differentiable (continuous) curve, there is at least one point on that arc at which the derivative (slope) of the curve is equal to the "average" derivative of the arc. Briefly, a suitable infinitesimal element of the arc is parallel to the secant chord connecting the endpoints of the arc. The theorem is used to prove theorems that make global conclusions about a function on an interval starting from local hypotheses about derivatives at points of the interval.

More precisely, if a function f(x) is continuous on the closed interval [a, b] and differentiable on the open interval (a, b), then there exists a point c in (a, b) such that

A special case of this theorem was first described by Parameshvara (1370–1460) from the Kerala school of astronomy and mathematics in his commentaries on Govindasvāmi and Bhaskara II.[2] The mean value theorem in its modern form was later stated by Augustin Louis Cauchy (1789–1857). It is one of the most important results in differential calculus, as well as one of the most important theorems in mathematical analysis, and is essential in proving the fundamental theorem of calculus. The mean value theorem follows from the more specific statement of Rolle's theorem, and can be used to prove the more general statement of Taylor's theorem (with Lagrange form of the remainder term).

The mean value theorem is a generalization of Rolle's theorem, which assumes f(a) = f(b), so that the right-hand side above is zero.

The mean value theorem is still valid in a slightly more general setting. One only needs to assume that f : [a, b] → R is continuous on [a, b], and that for every x in (a, b) the limit

exists as a finite number or equals +∞ or −∞. If finite, that limit equals f′(x). An example where this version of the theorem applies is given by the real-valued cube root function mapping x to x1/3, whose derivative tends to infinity at the origin.

Note that the theorem is false if a differentiable function is complex-valued instead of real-valued. For example, define f(x) = eix for all real x. Then

The expression (f(b) − f(a)) / (b − a) gives the slope of the line joining the points (a, f(a)) and (b, f(b)), which is a chord of the graph of f, while f′(x) gives the slope of the tangent to the curve at the point (x, f(x)). Thus the Mean value theorem says that given any chord of a smooth curve, we can find a point lying between the end-points of the chord such that the tangent at that point is parallel to the chord. The following proof illustrates this idea.

Define g(x) = f(x) − rx, where r is a constant. Since f is continuous on [a, b] and differentiable on (a, b), the same is true for g. We now want to choose r so that g satisfies the conditions of Rolle's theorem. Namely

Assume that f is a continuous, real-valued function, defined on an arbitrary interval I of the real line. If the derivative of f at every interior point of the interval I exists and is zero, then f is constant.

Proof: Assume the derivative of f at every interior point of the interval I exists and is zero. Let (a, b) be an arbitrary open interval in I. By the mean value theorem, there exists a point c in (a,b) such that

This implies that f(a) = f(b). Thus, f is constant on the interior of I and thus is constant on I by continuity. (See below for a multivariable version of this result.) 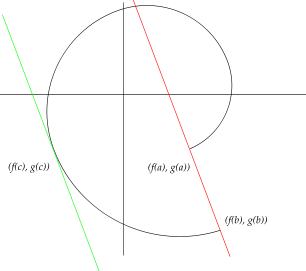 Geometrically, this means that there is some tangent to the graph of the curve

which is parallel to the line defined by the points (f(a),g(a)) and (f(b),g(b)). However Cauchy's theorem does not claim the existence of such a tangent in all cases where (f(a),g(a)) and (f(b),g(b)) are distinct points, since it might be satisfied only for some value c with f′(c) = g′(c) = 0, in other words a value for which the mentioned curve is stationary; in such points no tangent to the curve is likely to be defined at all. An example of this situation is the curve given by

Define h(x) = f(x) − rg(x), where r is a constant. Since f and g are continuous on [a, b] and differentiable on (a, b), the same is true for h. We now want to choose r so that h satisfies the conditions of Rolle's theorem. Namely

In particular, when the partial derivatives of f are bounded, f is Lipschitz continuous (and therefore uniformly continuous). Note that f is not assumed to be continuously differentiable nor continuous on the closure of G. However, in the above, we used the chain rule so the existence of ∇f would not be sufficient.

for every y in some neighborhood of x. (Here, it is crucial that x and y are sufficiently close to each other.) Since G is connected, we conclude E = G.

Remark that all arguments in the above are made in a coordinate-free manner; hence, they actually generalize to the case when G is a subset of a Banach space.

There is no exact analog of the mean value theorem for vector-valued functions. The problem is roughly speaking the following: If

is a differentiable function (where

is open) and if

is the line segment in question (lying inside

), then one can apply the above parametrization procedure to each of the component functions

(in the above notation set

). In doing so one finds points

on the line segment satisfying

But generally there will not be a single point

on the line segment satisfying

simultaneously. (As a counterexample one could take

defined via the component functions

are never simultaneously zero as

between 0 and 1 such that

On the other hand we have

at the particular point

has been replaced by the mean value

. This last version can be generalized to vector valued functions:

vectors such that the whole line segment

where the integral of a matrix is to be understood componentwise. (Dƒ denotes the Jacobian matrix of ƒ.)

From this one can further deduce that if ||Dƒ(x + th)|| is bounded for t between 0 and 1 by some constant M, then

) for the real valued components of

The claim follows since

is the matrix consisting of the components

Here we have used the following

be a continuous function defined on the interval

denote the value of the integral

as desired. (Note the use of the Cauchy–Schwarz inequality.) This shows (***) and thereby finishes the proof of (**).

is a continuous function and φ is an integrable function that does not change sign on the interval (a,b), then there exists a number

Proof of the first mean value theorem for integration

It follows from the extreme value theorem that the continuous function G has a finite infimum m and a finite supremum M on the interval [a, b]. From the monotonicity of the integral and the fact that m ≤ G(t) ≤ M, it follows that

denotes the integral of φ. Hence, if I = 0, then the claimed equality holds for every x in [a, b]. Therefore, we may assume I > 0 in the following. Dividing through by I we have that

The extreme value theorem tells us more than just that the infimum and supremum of G on [a, b] are finite; it tells us that both are actually attained. Thus we can apply the intermediate value theorem, and conclude that the continuous function G attains every value of the interval [m, M], in particular there exists x in [a, b] such that

This completes the proof.

There are various slightly different theorems called the second mean value theorem for integration. A commonly found version is as follows:

, the existence of which follows from the conditions. Note that it is essential that the interval (a, b] contains b. A variant not having this requirement is:

This variant was proved by Hiroshi Okamura in 1947.[citation needed]

A probabilistic analogue of the mean value theorem

Let X and Y be non-negative random variables such that

(i.e. X is smaller than Y in the usual stochastic order). Then there exists an absolutely continuous non-negative random variable Z having probability density function

Let g be a measurable and differentiable function such that E[g(X)] and E[g(Y)] are finite, and let its derivative g' be measurable and Riemann-integrable on the interval [x,y] for all