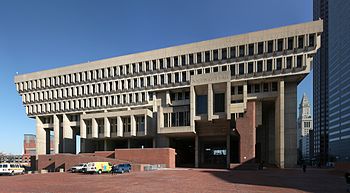 Boston City Hall (built 1969)[1] is the seat of the municipal government of Boston, Massachusetts.[2] Architecturally, it is an example of the brutalist style. It was designed by Kallmann McKinnell & Knowles. Together with the surrounding plaza, City Hall is part of the Government Center complex, a major urban redesign effort in the 1960s.

The Boston City Council works from City Hall. Councillors for 2011 are:

Description of the architecture 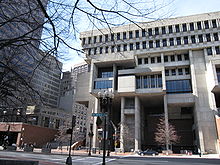 City Hall, looking up from Dock Square and Congress Street, 2010 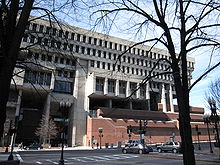 City Hall, looking up from Dock Square and Congress Street, 2010

Intentions of the architects

This controversial building was designed by Kallmann McKinnell & Knowles, a firm of three Columbia University professors, who won an international, two-stage competition in 1962. Their design, selected from 256 entries by a jury of prominent architects and businessmen, departed from the more conventional designs of most of the other entries—typified by pure geometrical forms clad with sleek curtain walls—to introduce an articulated structure that expressed the internal functions of the buildings in rugged, cantilevered concrete forms. Hovering over the broad brick plaza, the City Hall was designed to create an open and accessible place for the city's government, with the most heavily used public activities all located on the lower levels directly connected to the plaza. The major civic spaces, including the Council chamber, library and Mayor's office, were one level up, while the administrative offices were housed above these, behind the repetitive brackets of the top floors.[citation needed]

At a time when monumentality was seen as an appropriate attribute for governmental architecture, the architects sought to create a bold statement of modern civic democracy, placed within the historic city of Boston (which was, at that time, in desperate need of reinvention, investment, and vision). While the architects looked to precedents by Le Corbusier, especially the monastery of Sainte Marie de La Tourette[4] , with its cantilevered upper floors, exposed concrete structure, and its similar interpretation of public and private spaces, they also drew from the example of Medieval and Renaissance Italian town halls and public spaces, as well as from the bold granite structures of 19th-century Boston (including Alexander Parris' Quincy Market immediately to the east).

Many of the elements in the design have been seen as abstractions of classical design elements, such as the coffers and the architrave above the concrete columns. Kallmann, McKinnell, and Knowles collaborated with two other Boston architectural firms and one engineering firm to form the Architects and Engineers for the Boston City Hall, responsible for construction, which took place from 1963 to 1968.

The designers designed City Hall as divided into three sections, aesthetically and also by use. The lowest portion of the building, the brick-faced base, which is partially built into a hillside, consists of four levels of the departments of city government where the public has wide access. The brick largely transfers over to the exterior of this section, and it is joined by materials such as quarry tile inside. The use of these terra cotta products relates to the building's location on one of the original slopes of Boston—expressed in the open, brick-paved plaza—and also to historic Boston's brick architecture, seen in the adjoining Sears Crescent block and the Blackstone Block buildings across Congress Street.

The intermediate portion of City Hall houses the public officials: the Mayor, the City Council members, and the Council Chamber. The oversize scale and the protrusion of these interior spaces on the outside—instead of burying them deep within the building—reveal these important public functions to the passerby, and create a visual and symbolic connection between the city and its government. The effect is of a small city of concrete-sheltered structures cantilevered above the plaza: large forms that house important civic activities. The cantilevers are supported by exterior columns, spaced alternately at 14-foot-4-inch (4.37 m) and 28-foot-8-inch (8.74 m), which are steel-reinforced. 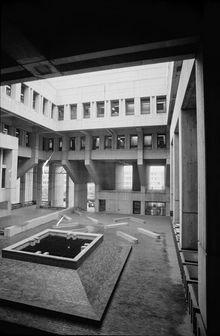 The upper stories contain the city’s office space, used by civil servants not visited frequently by the public, such as the administrative and planning departments. This bureaucratic nature is reflected in the standardized window patterns, separated by pre-cast concrete fins, with an open office plan typical of modern office building style. (The subsequent enclosure of much of this space into isolated offices contributed to the ventilation problems of these floors.)

The top of the brick base was designed as an elevated courtyard melding the fourth floor of the city hall with the plaza. Because of security concerns, city officials in recent years blocked access to the courtyard and to the outdoor stairways to Congress Street and the plaza. The courtyard is occasionally opened up for events (such as the celebration of the Boston Celtics championship in 1986). After 9/11 security was further increased. City Hall's north entrance facing the plaza was barricaded with jersey barriers and bicycle racks. All visitors entering the front and back entrances must pass through metal detectors.

City Hall was constructed using mainly cast-in-place and precast Portland cement and some masonry. About half of the concrete used in the building was precast — roughly 22,000 separate components — and the other half was poured-in-place concrete. All of the concrete used in the structure, excluding that of the columns, is mixed with a light, coarse rock. While the majority of the building is created using concrete, precast and poured-in-place concrete are distinguishable by their different colors and textures. For example, cast-in-place elements are coarse and grainy textured because the concrete was poured into fir wood frames to mold it, while precast elements, such as trusses and supports, were set in steel molds to gain smooth, clean surfaces. This distinction can also be seen in the fact that the exterior poured-in-place pieces are of type I cement, a lightly colored cement, while the exterior precast components use type II cement, a dark colored cement. The base of the building is dark with brick, Welsh quarry tiles, mahogany walls, and darker concrete. As the building ascends, the overall color lightens, as lighter concrete is used.

Reception of the architecture

While assessment of the building's architecture has followed the vagaries of architectural style, design professionals in general have admired the design, and, at the time of its completion, the building was featured in popular publications throughout the world, and awarded three stars by the Michelin guide, among others.

Representative of its acclaim was the opinion of New York Times critic Ada Louise Huxtable, who wrote, "What has been gained is a notable achievement in the creation and control of urban space, and in the uses of monumentality and humanity in the best pattern of great city building. Old and New Boston are joined through an act of urban design that relates directly to the quality of the city and its life."

Architect, educator and writer Donlyn Lyndon wrote in the Boston Globe that "Boston City Hall carries an authority that results from the clarity, articulation, and intensity of imagination with which it has been formed." Architectural historian Douglass Shand-Tucci, author of Built in Boston: City and Suburb, 1800—2000, called City Hall "one of America's foremost landmarks" and "arguably the great building of twentieth century Boston."

Stylistically, City Hall is considered one of the leading examples of what has been called Brutalist architecture. It is listed among the "Greatest Buildings" by Great Buildings Online, an affiliate of Architecture Week.[5] Additionally, in a 1976 Bicentennial poll of historians and architects regarding America's greatest buildings, sponsored by the American Institute of Architects, Boston City Hall received the sixth most mentions.

According to some, the building's popularity declined as the tide turned away from modernism to more traditional and post-modern styles in the 1970s and 1980s, as the newness wore off, as architectural monumentality fell out of vogue, and as the idea of a "new" era and a "new" Boston became old-fashioned.

In addition, the experience of the building is also colored by the lack of maintenance and finish that has characterized the structure following the Kevin White administration. Compared to the brightness, cleanliness, and warmth of a building such as the Boston Public Library, for instance, City Hall suffers from a lack of lighting, often-poor maintenance, and inadequate decoration with art, plantings, and furniture. In this context, some users and occupants have found City Hall unpleasant, dysfunctional and dispiriting. It is the butt of jokes in some local magazines.[6] The structure's complex interior spaces and sometimes confusing floor plan are not mitigated through quality way-finding, signage, graphics or lighting.

Additionally, its large open spaces, central courtyard and concrete structure make the building expensive to heat (although, it must be pointed out, numerous public, institutional and religious buildings throughout greater Boston have similarly large—or larger—open spaces and are comfortably maintained).

In 2008, the building was voted "World's Ugliest Building" in a online poll which was picked up by a number of news outlets and embraced as a boon to tourism by Mayor Menino.[7][8] 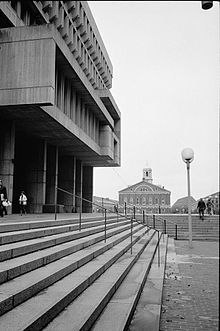 Reception of the Plaza

The surrounding City Hall Plaza has experienced a similar change in assessment over time. Although its recessed fountain, trees, and umbrella-shaded tables drew crowds in the early years, more recently the space has been cited as problematic in terms of design and urban planning. To illustrate the range of opinion regarding the Plaza, in 2004 the Project for Public Spaces identified it as the worst single public plaza worldwide, out of hundreds of contenders.[9][dead link] On the other hand, in 2009, The Cultural Landscape Foundation included City Hall Plaza as one of thirteen national "Marvels of Modernism" in its exhibition and publication.[citation needed] Several rounds of efforts to liven up City Hall Plaza have yielded only minimal changes, with the challenge being, in part, the numerous approvals required at the city, state and federal level.

On December 12, 2006, Boston Mayor Thomas Menino proposed selling the current city hall and adjacent plaza to private developers and moving the city government to a site in South Boston.[10][11]

On April 24, 2007, the Boston Landmarks Commission reviewed a petition backed by a group of architects and preservationists to grant the building special landmark status (much to the dismay of Mayor Menino). The petition will be studied further before a final vote is taken.[12]

On July 10, 2008, Landmarks Commission official said the petition to grant the building special landmark status had been recommended for study, but probably would not be considered by the panel unless a plan to demolish the structure was imminent. Members of the group Citizens for City Hall also opposed Mayor Menino's plan to build a new City Hall on the South Boston waterfront because it would be a major inconvenience for tens of thousands of city residents.[13]

In December 2008, Menino suspended his plan to move city hall in 2011. In a worsening recession, he stated, "I can't consciously move ahead on a major project like this at this time".[14]

An advocacy group, Friends of Boston City Hall, was established to help develop support for preserving and enhancing City Hall, and improving the Plaza.[citation needed]

Events near the building

City Hall is located in Government Center in downtown Boston. The adjoining 8-acre (3.2 ha) City Hall Plaza is sometimes used for parades and rallies; most memorably, the region's championship sports teams, the Boston Celtics, Boston Bruins, New England Patriots and the Boston Red Sox, have been feted in front of City Hall. A huge crowd in the plaza also greeted Queen Elizabeth II during her 1976 Bicentennial visit, as she walked from the Old State House to City Hall to have lunch with the Mayor.

History of the site

Boston City Hall, with view of Faneuil Hall through the window, 1981