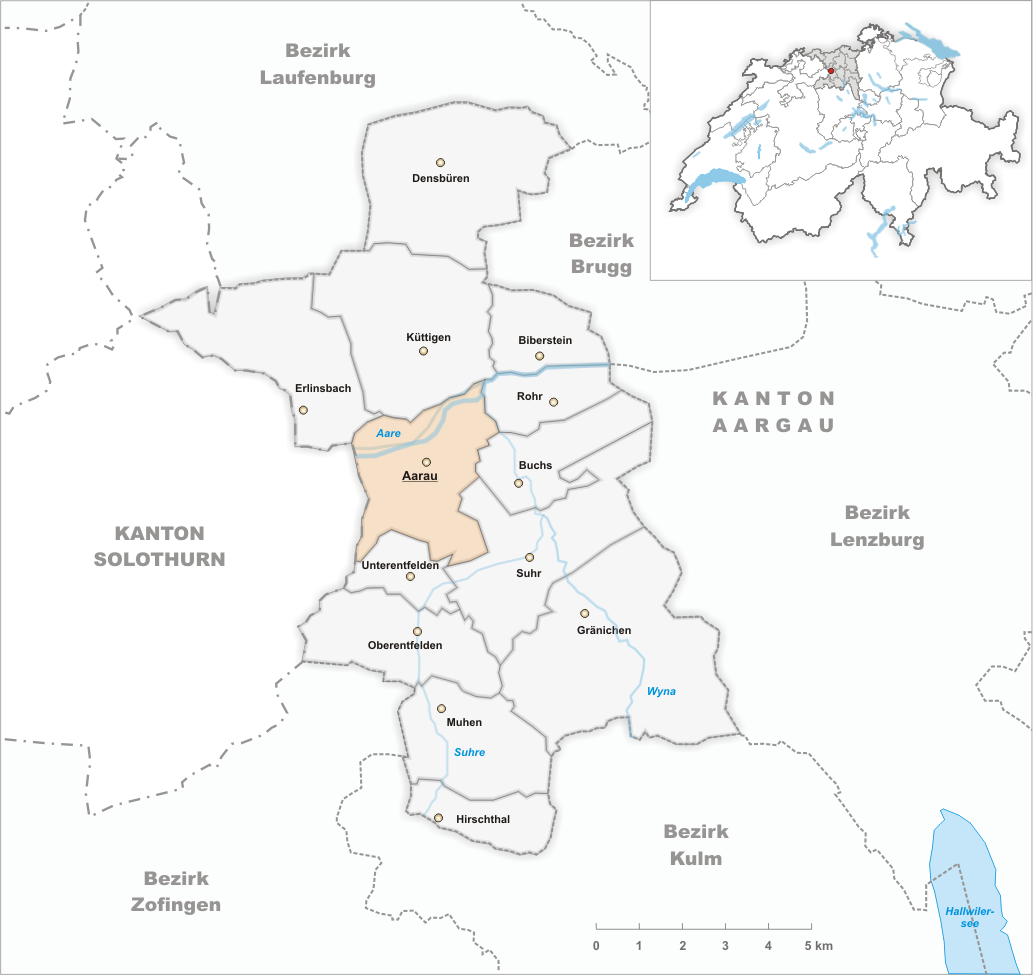 Aarau is the capital of the northern Swiss canton of . The city is also the capital of the district of Aarau. It is German-speaking and predominantly Protestant. Aarau is situated on the , in the valley of the , on the river's right bank, and at the southern foot of the ,

The old city of Aarau is situated on a rocky outcropping at a narrowing of the river valley, at the southern foot of the Jura mountains. Newer districts of the city lie to the south and east of the outcropping, as well as higher up the mountain, and in the valley on both sides of the Aar.The neighboring municipalities are to the north, Rohr and Buchs to the east, Suhr to the south-east, to the south, and and Erlinsbach to the west.Aarau and the nearby neighboring municipalities have grown together and now form an interconnected agglomeration. The only exceptions are Unterentfelden and Eppenberg-Wöschnau to the south, whose settlements are divided from Aarau by the expansive forests of Gönhard and Zelgli.Approximately nine tenths of the city is south of the Aar, and one tenth is to the north. The area of the municipality is 894 hectares, of which 301 are forested and 491 are developed. The lowest elevation, 365 meters, is found at the banks of the Aar, and the highest elevation, at 471 meters, is the Hungerberg on the border with Küttigen.

A few artifacts from the period were found in Aarau. Near the location of the present train station, the ruins of a settlement from the (about 1000 BC) have been excavated. The Roman road between Salodurum () and passed through the area, along the route now covered by the Bahnhofstrasse. In 1976 divers in the Aar found part of a seven-meter wide wooden bridge from the late Roman times.

Aarau was founded around AD 1240 by the counts of . The first certain reference to the city dates to 1256. The town was ruled from the "Rore" tower, which has been incorporated into the modern city hall.

In 1273 the counts of Kyburg died out. Agnes of Kyburg, who had no male relations, sold the family's lands to King von . He granted Aarau its city rights in 1283. In the 14th Century the city was expanded in two stages, and a second defesive wall was constructed. A deep ditch separated the city from its "suburb;" its location is today marked by a wide street named "Graben" (meaning Ditch).

In 1415 Bern invaded lower Aargau with the help of . Aarau capitulated after a short resistance, and was forced to swear allegiance to the new rulers. In the 16th Century, the rights of the lower classes were abolished.In March 1528 the citizens of Aarau allowed the introduction of Protestantism at the urging of the Bernese. A growth in population during the 16th Century led to taller buildings and more dense construction methods. Early forms of industry developed at this time; however, unlike in other cities, no guilds were formed in Aarau.

Starting in the early 18th century, the textile industry was established in Aarau. German immigration contributed to the city's favorable conditions, in that they introduced the cotton and silk factories. These highly educated immigrants were also responsible for education reform and the enlightened, revolutionary spirit that developed in Aarau.

1798: Capital of the Helvetic Republic

On December 27, 1797, the last of the was held in Aarau. Two weeks later a French envoy continued to foment the revolutionary opinions of the city. The contrast between a high level of education and a low level of political rights was particarly great in Aarau, and the city refused to send troops to defend the Bernese border. By Mid-March 1798 Aarau was occupied by French troops.

On March 22, 1798 Aarau was declared the capital of the . It is therefore the first capital of a unified Switzerland. Parliament met in the city hall. On September 20, the capital was moved to .

In 1803, Napoleon ordered the fusion of the cantons of Aargau, Baden and Fricktal. Aarau was declared the capital of the new, enlarged canton of . In 1820 the city wall was torn down, with exception of the individual towers and gates, and the defensive ditches were filled in.

The wooden bridge, dating from the Middle Ages, across the Aar was destroyed by floods three times in thirty years, and was replaced with a steel suspension bridge in 1851. This was replaced by a concrete bridge in 1952. The city connected to the Swiss Central Railroad in 1856.

The textile industry in Aarau broke down in about 1850 because of the protectionist tariff policies of neighboring states. Other industries had developed by that time to replace it, including the production of mathematical instruments, shoes and cement. Beginning in 1900, numerous electrical enterprises developed. By the 1960s, more citizens worked in service industries or for the canton-level government than in manufacturing. During the 1980s many of the industries left Aarau completely.

In 1802 the Canton School was established; it was the first non-parochial high school in Switzerland. It developed a good reputation, and was home to winners , , and , as well as several Swiss politicians and authors.

The purchase of a manuscript collection in 1803 laid the foundation for what would become the Cantonal Library, which contains a annotated by . More newspapers developed in the city, maintaining the revolutionary atmosphere of Aarau. Beginning in 1820, Aarau has been a refuge for political refugees.

The urban educational and cultural opportunities of Aarau have been extended through numerous new institutions. A Theater and Concert Hall was constructed in 1883, which was renovated and expanded in 1995-96. The Aargau Nature Museum opened in 1922. A former cloth warehouse was transformed into a small theater in 1974, and the alternative culture center KIFF (Culture in the fodder factory) was established in a former animal fodder factory.

The earliest use of the place name was in 1248 (in the form Arowe), and probably referred to the settlement in the area before the founding of the city. It comes, along with the name of the River Aar (which was called Arula, Arola, and Araris in early times), from the German Au, meaning .

The historic old town forms an irregular square, consisting of four parts (called "Stöcke"). To the south lies the , that is, the part of the town formerly outside the city wall. One characteristic of the city is its painted , for which Aarau is sometimes called the "City of beautiful Gables". The old town, Laurenzenvorstadt, government building, cantonal library, state archive and art museum are all listed as heritage sites of national significance. [, p. 33.]

The "Schlössli" (small Castle), Rore Tower and the upper gate tower have remained nearly unchanged since the 13th century. The "Schlössli" is the oldest building in the city. It was already founded at the time of the establishment of the city shortly after 1200; the exact date is not known. City hall was built around Rore Tower in 1515.

The upper gate tower stands beside the southern gate in the city wall, along the road to Lucerne and Bern. The jail has been housed in it since the Middle Ages. A was erected in the tower in the middle of the 20th century, the bells for which were provided by the centuries-old bell manufacturers of Aarau.

The town church was built between 1471 and 1478. During the Reformation, in 1528, its twelve altars and accompanying pictures were destroyed. The "Justice fountain" (Gerechtskeitbrunnen) was built in 1634, and is made of french ; it includes a statue of Lady Justice made of , hence the name. It was originally in the street in front of city hall, but was moved to its present location in front of the town church in 1905 due to increased traffic.

The largest employer in Aarau is the Canton government, the offices of which are distributed across the entire city at numerous locations. There are approximately 1600 employers in the city, offering a total of 23,000 jobs, of which 0.3% are agricultural, 18% are industrial, and 81% are service industries. This means that Aarau has more jobs than inhabitants.

One of the two head offices of the "", Switzerland's fifth largest newspaper, is located in Aarau, as are the Tele M1 television channel studios, and several radio stations.

, founded in 1819, was an internationally known geodetic instrument manufacturer based in Aarau. However, it was taken over by Wild Leitz in 1988, and was closed in 1991.

More than half of the workers in Aarau live in the city's suburbs, or farther away in the surrounding area. This leads to a busy rush hour, and regular traffic jams. Statistically, Aarau has the most jobs per capita of any Swiss city.

The small scale of Aarau causes it to continually expand the borders of its growth. The urban center lies in the middle of the "Golden Triangle" between , , and , and Aarau is having increasing difficulty in maintaining the independence of its economic base from the neighboring large cities. The idea of merging Aarau with its neighboring suburbs has been recently discussed in hopes of stopping the slowly progressing losses.

Every Saturday morning there is a vegetable market in the "Graben" at the edge of the Old City. It is supplied with regional products. In the last week of September the MAG (Market of Aarauer Tradesmen) takes place there, at which regional companies sell their products. The "Rüeblimärt" is held in the same place on the first Wednesday in November, which is a Carrot fair. The Aarau fair is held at the ice skating rink during the Spring.

The population of Aarau grew continuously from 1800 until about 1960, when the city reached a peak population of 17,045, more than five times its population in 1800. However, since 1960 the population has fallen by 8%. There are three reasons for this population loss: firstly, since the completion of Telli (a large apartment complex), the city has not had any more considerable land developments. Secondly, the number of people per household has fallen; thus, the existing dwellings do not hold as many people. Third, population growth was absorbed by neighboring municipalities in the regional urban area, and numerous citizens of Aarau moved into the countryside. This trend might have stopped since the turn of the century. Existing industrial developments are being used for new purposes instead of standing empty.

The population of Aarau was formerly predominately Protestant. Through immigration from other regions in Switzerland, and more so from foreign countries, the Protestant portion of the population has continually decreased, and stands at 43.5% as of 2000. 29.2% were , 4.8% , 3.2% Orthodox Christian. Slightly more than 17% of the population indicated that they are not religious.

In place of a town meeting, a town assembly ("Einwohnerrat") of 50 members is elected by the citizens, and follows the policy of . It is responsible for approving tax levels, preparing the annual account, and the business report. In addition, it can issue regulations. The term of office is four years. In the last two elections the parties had the following representation:At the district level, some elements of the government remain a direct democracy. There are optional and obligatory referendums, and the population retains the right to establish an initiative.

The executive authority is the town council ("Stadtrat"). The term of office is four years, and its members are elected by a . It leads and represents the municipality. It carries out the resolutions of the assembly, and those requested by the canton and national level governments.