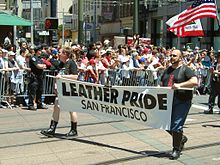 Start of the Leather contingent at the 2004 San Francisco gay pride parade.

Gay male leather culture has existed since the late 1940s,[1] when it likely grew out of post-WWII biker culture. Early gay leather bars were subcultural versions of the motorcycle club with pioneering gay motorcycle clubs including the Satyrs, established in Los Angeles in 1954; Oedipus, also established in Los Angeles in 1958, and the New York Motorbike Club. Early San Francisco clubs included the Warlocks and the California Motor Club.[2]

These gay clubs, like the clubs of straight motorcycle culture in general, reflected a disaffection with the mainstream culture of post-World War II America, a disaffection whose notoriety — and therefore appeal — expanded after the sensationalized news coverage of the Hollister "riot" of 1947. The 1953 film The Wild One starring Marlon Brando wearing jeans, a T-shirt, a leather jacket, and muir cap, played on pop-cultural fascination with the Hollister "riot" and promoted an image of masculine independence that resonated with some gay men dissatisfied with a culture which stereotyped gay men as effeminate. To that end, gay motorcycle culture also reflected some men's disaffection with the coexistent gay cultures more organized around high culture, popular culture (especially musical theater), and/or camp style. Perhaps as a result, the leather community that emerged from the motorcycle clubs also became the practical and symbolic location for gay men's open exploration of kink and S&M.[2]

Throughout the history of the leather subculture, a variety of traditions have been observed, often diligently.[3] While most or all are based on military protocols and ritual, these traditions varied widely between regions, causing much debate today over which traditions are the "original" or "true" traditions, or whether the "romanticized versions of leather history" ever existed at all.[4]

The more specifically homoerotic aesthetics of men's leather culture drew on other sources as well, including military and police uniforms. This influence is particularly evident in the graphical illustrations of leathermen found in the work of Tom of Finland. The pornographic films of one of his models Peter Berlin, such as his 1973 film Nights in Black Leather, also reflected and promoted the leather subcultural aesthetic.

Aspects of leather culture beyond the sartorial can also be seen in the 1970 murder mystery novel Cruising by Jay Green. The novel was the basis for the 1980 movie Cruising, which depicted aspects of the men's leather subculture for a wider audience.

And lastly, perhaps no figure has more vividly represented the leather subculture in the popular imagination than the leatherman portrayed by Glenn Hughes of the Village People. 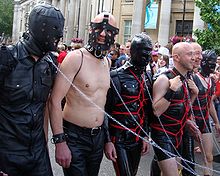 The Leatherman's Handbook by Larry Townsend, published in 1972, epitomizes the association of the leather subculture with BDSM.[9] Townsend described in detail a community of gay males who wore leather and casually engaged in sadomasochistic sex with one another. Recreational drugs and alcohol were frequently used. Pairings were often just for one night or a few days. Participants often took a dominant role in one encounter but a submissive role in another (a practice known as "switching"). Townsend describes very little in the way of social hierarchy or organization within this culture, though he does convey a definite sense of community.

In the early 1980s and perhaps before, there was a rebellion against the old guard role rigidity. There was a new emphasis on choices, or identity: A person might identify as a slave or a Master instead of being forced to start from the bottom and work up. Despite initial resistance, there was an acceptance of these individual identities in the eighties, an era of pushing the edge in BDSM play. Men who lived in leather during the 1980s called their leather culture "new guard" although that term has changed again in the 1990s. New guard, or new leather, which describes an era in leather culture that started in the early 1990s, embraced switching and a greater variety of approaches to eroticism.[citation needed] An increasing number of pansexual clubs evolved as well.[citation needed]

Leather subcultural practices have also become a common, though perhaps not widespread, element of the goth subculture.

Although gay men are the most visible symbol of the leather community, in 2010 there are numerous women who identify as leatherwomen - and women have the International Ms. Leather (IMsL) event as their corollary to International Mr. Leather (IML). Two examples are Joan Jett, who has a leather pride sticker prominently displayed on her guitar, and Sandy "Mama" Reinhardt, who leads an international leather family and led the LGBT parade in full leather when she was the grand marshall.

In North America, with the possible exception of Quebec, gay men's leather culture continues to be associated with men above the age of 40.[citation needed]. As of 2010, this is changing. The kink/fetish/gear communities are merging with the leather community and there is an emergence of young leathermen and leatherwomen. In Europe younger men have combined the aesthetic and exploration of sexual power with the gay skinhead movement and social-fraternal organizations like BLUF.

Styles of dress associated with gay men's leather culture also had influence on mainstream pop culture. It may be seen in the chains and leather or denim and leather look espoused by rock and heavy metal bands. There are numerous popular images of Elvis from the 1960s fully clothed in black leather. 1970s rock acts such as Kiss, Black Sabbath etc. also wore an abundance of black leather garments. An early popular practitioner of this look in a heavy metal context was Rob Halford, the lead singer of the influential British heavy metal band Judas Priest. Halford (who is himself openly gay) wore a leather costume on stage as early as 1978, a look he described as originating in the gay leather subculture.[10]

The 10,000-square-foot (930 m2), two-story Leather Archives and Museum, based in Chicago, has much information and details on the beginning of the leather subculture.

In addition to activities in Chicago, the LA&M serves the leather world by preserving material from various leather communities, and sends traveling exhibits around the country.

In 2005, Viola Johnson started traveling with The Carter Johnson Leather Library [(http://www.leatherlibrary.org)] and telling stories from her 35 years of personal involvement in the leather subculture.