Tiger Island is wildlife attraction at the Dreamworld amusement park on the Gold Coast, Queensland, Australia.[1] In 2010, the area was home to twelve tigers[2] and two cougars.[3] The exhibit is home to both the Bengal and Sumatran tiger species.[2]

Tiger Island opened in 1995 as one of only two interactive tiger exhibits in the world. The exhibit featured various locations for the tigers to live, swim and play. Just three years later in October 1998, Dreamworld welcomed their first litter of four Bengal Tiger cubs consisting of Rama, Sita, Sultan and Taj. In 2007, the first litter of Sumatran tiger cubs were born featuring Indah and Rahni.[4] A nursery and smaller tiger enclosure were constructed to showcase the younger tigers before being released into the main exhibit.[1][5] 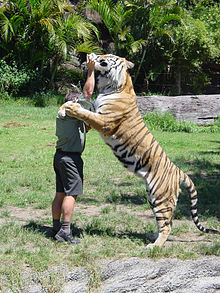 A tiger drinking milk from a trainers hand during a Tiger Presentation. 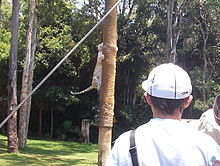 One of the tigers retrieving food from the top of a post during the show.

Tiger Presentations are performed twice daily in the main exhibit. Guests can watch as the tigers perform many natural behaviours which showcase their agility. Throughout the presentation the tigers climb 20-foot (6.1 m) trees and jump up to 10-foot (3.0 m) into the air.[20][21]

Since 1997, Dreamworld has run the Dreamworld Tiger Fund which aims to support various projects that help save tigers in the wild. The fund has contributed over a million dollars to this cause in the past 15 years. The fund relies on a percentage of profits from merchandise sales, tiger walks and tiger photos as well as donations from the Dreamworld's guests and the wider community.[22]

Overlooking the tiger exhibit exists a merchandise and a dining outlet. Guests can purchase tiger merchandise at Bengal Bazaar and buy food and beverage items at the Bengal Tea House.[5]