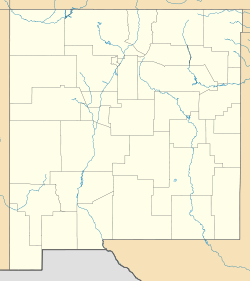 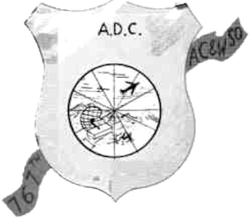 Emblem of the 767th Aircraft Control and Warning Squadron

In late 1951 Air Defense Command selected this site near El Vada, New Mexico as one of twenty-eight radar stations built as part of the second segment of the permanent radar surveillance network. Prompted by the start of the Korean War, on July 11, 1950, the Secretary of the Air Force asked the Secretary of Defense for approval to expedite construction of the second segment of the permanent network. Receiving the Defense Secretary’s approval on July 21, the Air Force directed the Corps of Engineers to proceed with construction.

On 1 January 1951 the 767th Aircraft Control and Warning Squadron was activated at El Vada Air Force Station (L-44). The unit was later installed at the permanent site at Tierra Amarilla (P-8) several miles to the north-northeast that was activated to provide coverage for Los Alamos National Laboratory. By September 1952, the 767th AC&W Squadron commenced operation at this new permament site, and initially the station functioned as a Ground-Control Intercept (GCI) and warning station. As a GCI station, the squadron's role was to guide interceptor aircraft toward unidentified intruders picked up on the unit's radar scopes.

The remoteness of the site from larger cities called for provision of activities at the site. A basketball league played on an outdoor court. Bingo nights and movies contributed to squadron morale. In 1953, an indoor gymnasium was constructed to provide year round physical recreation. In the mid-1950s, the Air Force leased land for trailers for families.

On 8 February 1959 the station was ordered closed and the squadron was inactivated. This became the first radar of the permanent ADC network to shutdown. In 1961 the station was acquired by the State of New Mexico. The New Mexico Forestry and Resource Conservation Division occupied the site brieﬂy, but it was ultimately abandoned, and turned over to Northern New Mexico Community College (NNMCC) by the New Mexico State Legislature for educational purposes. Northern New Mexico Community College, the owner of the site, did not have the resources to develop the site and operate it. The site was never used again.

The former Tierra Amarilla Air Force Station was placed on the National Register of Historic Places on February 26, 2001. It was one of the ﬁrst New Mexico sites from the Cold War to be nominated. Today, the site is abandoned with many decrepit buildings standing in various states of decay. It has all the appearance of a ghost town, unused for the past 50 years.