In 1963, G. F. Rempfer designed the electron optics for an early ultrahigh-vacuum (UHV) PEEM. In 1965, G. Burroughs at the Night Vision Laboratory, Fort Belvoir, Virginia built the bakeable electrostatic lenses and metal-sealed valves for PEEM. During 1960s, in the PEEM, as well as TEM, the specimens were grounded and could be transferred in the UHV environment to several positions for photocathode formation, processing and observation. These electron microscopes were used for only a brief period of time, but the components live on. The first commercially available PEEM was designed and tested by Engel during the 1960s for his thesis work under E. Ruska and developed it into a marketable product, called the “Metioskop KE3”, by Balzers in 1971. The electron lenses and voltage divider of the PEEM were incorporated into one version of a PEEM for biological studies in Eugene, Oregon around 1970.

During 1970s and 1980s the second generation (PEEM-2) and third generation (PEEM-3) microscopes were constructed. PEEM-2 is a conventional not aberration-corrected instrument employing electrostatic lenses. It uses a cooled charge-coupled device (CCD) fiber-coupled to a phosphor to detect the electron-optical image. The aberration corrected microscope PEEM-3 employs a curved electron mirror to counter the lowers order aberrations of the electron lenses and the accelerating field.

The photoemission or photoelectric effect is a quantum electronic phenomenon in which electrons (photoelectrons) are emitted from matter after the absorption of energy from electromagnetic radiation such as UV light or X-ray.

When UV light or X-ray is absorbed by matter, electrons are excited from core levels into unoccupied states, leaving empty core states. Secondary electrons are generated by the decay of the core hole. Auger processes and inelastic electron scattering create a cascade of low-energy electrons. Some electrons penetrate the sample surface and escape into vacuum. A wide spectrum of electrons is emitted with energies between the energy of the illumination and the work function of the sample. This wide electron distribution is the principal source of image aberration in the microscope. 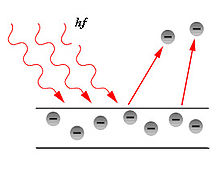 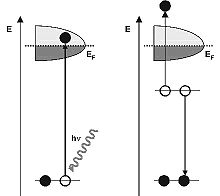 Using Einstein’s method, the following equations are used: Energy of photon=Energy needed to remove an electron + Kinetic energy of the emitted electron

f is the frequency of the incident photon;

is the work function;

is the maximum kinetic energy of ejected electrons;

f0 is the threshold frequency for the photoelectric effect to occur;

m is the rest mass of the ejected electron;

vm is the speed of the ejected electron.

According to Einstein’s special theory of relativity: E (energy) and p (momentum) of a particle is:

m is the rest mass of the particle;

c is the velocity of light.

Photoemission Electron Microscope (PEEM) is a parallel imaging instrument. It creates at any given moment a complete picture of the photoelectron distribution emitted from the imaged surface region.

The viewed area of the specimen must be illuminated homogeneously with appropriate radiation (ranging from UV to hard x-rays). UV light is the most common radiation used in PEEM because very bright sources are available, like Hg lamps. However, other wavelengths (like soft x-rays) are preferred where analytical information is required.

The electron optical column contains two or more electrostatic or magnetic electron lenses, corrector elements such as a stigmator and deflector, an angle-limiting aperture in the backfocal plane of one of the lenses (Figure 4).

As in any emission electron microscope, the objective or cathode lens determines the resolution. The latter is dependent on the electron-optical qualities, such as spherical aberrations, and the energy spread of the photoemitted electrons. The electrons are emitted into the vacuum with an angular distribution close to a cosine square function. A significant velocity component parallel to the surface will decrease the lateral resolution. The faster electrons, leaving the surface exactly along the center line of the PEEM, will also negatively influence the resolution due to the chromatic aberration of the cathode lens. The resolution is inversely proportional to the accelerating field strength at the surface but proportional to the energy spread of the electrons. So resolution r is approximately:

In the equation, d is the distance between the specimen and the objective, ΔE is the distribution width of the initial electron energies and U is the accelerating voltage.

Besides the cathode or objective lens, situated on the left hand side of Figure 4, two more lenses are utilized to create an image of the specimen: an intermediate three-electrode lens is used to vary the total magnification between 100× if the lens is deactivated, and up to 1000× when needed. On the right-hand side of Figure 4 is the projector, a three electrode lens combined with a two-element deceleration lens. The main task of this lens combination is the deceleration of the fast 20 keV electrons to energies for which the channelplate has its highest sensitivity. Such an image intensifier has its best performance for impinging electrons with kinetic energies roughly about 1 keV.

An energy filter can be added to the instrument in order to select the electrons that will contribute to the image. This option is particularly used for analytical applications of the PEEM. By using an energy filter, a PEEM microscope can be seen as imaging UPS or XPS. By using this method, spatially resolved photoemission spectra can be acquired with spatial resolutions on the 100 nm scale and with sub-eV resolution. Using such instrument, one can acquire elemental images with chemical state sensibility or work function maps. Also, since the photoelectron are emitted only at the very surface of the material, surface termination maps can be acquired.

A detector is placed at the end of electron optical column. Usually, a phosphor screen is used to convert the electron image to a photon image. The choice of phosphor type is governed by resolution considerations. A multichannel plate detector that is imaged by a CCD camera can substitute phosphor screen.

Comparison from other techniques